Microreview [book]: Nightwatch on the Hinterlands 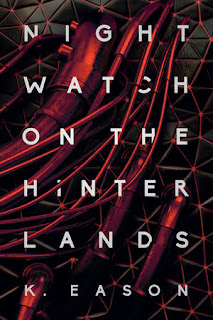 In Eason’s  How Rory Throne Destroyed the Multiverse (and its sequel, How the Multiverse Got Its Revenge), the author took some of the tropes of fantasy, including a princess with gifts from Faerie, and blended it into a space opera universe, firmly planting a flag in that ephemeral and shifting realm between science fiction and fantasy. Rory Thorne’s universe had faeries, and formalized mathematics based magic (arithomancy), and some traditionally fantasy found  governmental forms of government alongside high powered weapons, space craft, space stations and other trappings of space opera. I thought for me the first novel’s enthusiasm and joy and inventiveness did not quite translate and continue successfully into the second novel, however.

It was with a little skepticism, and only moderate interest, that I heard that Eason was returning to the universe with new characters, setting, scenario, and oh yes, more genre blending, but in a quite different way than the previous two novels. But I found myself in the mood for science fantasy, that elusive hinterland between science fiction and fantasy, where the rules are not always clear. And so I came to Nightwatch on the Hinterlands, which is science fantasy, but has in the end a completely different feel and setup than the first two books, even as it keeps up the overall style of the author. Let’s dig in.

The story of Thorne and the conflicts therein are in the rearview mirror. Things have happened, lots of things have happened and we are far away from the events and conflicts of the first two novels. Instead, we are on the plane Tanis, which is on a border in more ways than one. In this future of Thorne’s world, a war has ended in a defection between sides, a splitting of one side, and the terrible use of two weapons. The first is the Riev, who are augmented, created battle mecha soldiers leftover from the last war.  The peace is uneasy, but their very existence in the post-war period make a LOT of people nervous. They themselves have a complicated existence even to themselves, they are a collective without individuality, like Borg Drones...or are they? They should be harmless. Threatening looking, but they were designed to fight a war against an enemy not present, so they should be all safe, right? Right?

Butthen there is the Weep. In that aforementioned war, a rip was made in the multiverse, a fissure in space and time that is still there, and creatures from those other dimensions, the Brood, come through. The planet Tanis has a small rift of the Weep on the planet, and that is enough to raise this from a completely ignored planet to one that has some military installations to watch that small rift...just in case. But it's really a quiet duty, for Lt. Iari, a veteran of that war who is now peacekeeping for the Aedis on Tanis. And it's a quiet duty for Gaer.  Officially, Gaer is an ambassador for the Five Tribes, the part of the Vakari who split off and helped end the war thereby. Unofficially, but widely suspected, Gaer is also a spy sending information back to the Five Tribes. He’s spent quite a while on this obscure planet, with nothing to really show for it.

But when Riev does the impossible and  kills a resident of the planet, and indications that contamination of the Brood may be involved, politics, action, intrigue and the streets of Tanis turn suddenly mean. And so we are off and running into the novel, with a pair of unlikely protagonists. Readers familiar with the old “Wunza” formula for tv shows and movies (One’s a soldier, one’s a diplomat and spy. Together they fight crime), will see that Eason is using that formula, here. Although Iari feels somewhat human, and is meant to be our surrogate in that regard, she is not (her superior  is, however), and Gaer certainly codes as very non-human.

No, the way I found to think about this, and the visuals and feel I kept getting throughout this novel, investigations by Iari and Gaer (who hold the bulk of the point of views of the novel, sometimes trading off in the middle of a scene to provide parallax in perspective) is Mass Effect. Vakari are not exactly Turians a la Garrus, and Gaer in particular is not the hard charging warrior that Garrus is--he is a diplomat ostensibly, a spy definitely, and most importantly, an arithomancer first and foremost, with some rather developed skills in that area, particularly military hexes and formulae. Imagine Garrus except as a Vanguard and you are kind of in the right ballpark for how it was resolving in my mind. That would make Iari a Femshep, and one that is very much a soldier, and a rather good one at that.

And for a solid chunk of the novel, then, this novel feels like one of the side quests in Mass Effect where Shep and the squad are trying to dig out a mystery. Fights and violence and combat, for sure, but also a lot of legwork, talking with people connected, having some of those people die, having a person from Iari’s past show up and become a POV character of their own, and secondary characters joining the squad (and not always surviving the experience, mind). And of course the interplay between characters, dealing with superiors, other power brokers trying to get a sense of what is happening, and sometimes, things going completely sideways.

The interesting thing, something I don’t discuss enough in these novels, is the question of style. Rory Thorne had a distinctive style, cadence, flow of words and writing that marked it off right away as Something Different. It ambitiously tried to make a style of its own and as I mentioned before, I think the first novel did better than the second in that regard, too. This novel feels more conventional on that axis, in terms of some of the literary techniques and devices. This novel in many ways is more approachable in that regard and readers who might have tried a bit of Rory Thorne.

However, in terms of how the characters act, and react to each other, the sharp edges to conversations and prickly social conflicts, the internal running dialogues in characters' heads giving readers a good sense of what the characters really are all about--that’s all here. With multiple points of view, we really get in deep with Iari and Gaer and really see what makes them tick. And they play off each other rather well, especially as they get to know each other’s secrets and backstory. For as much as I enjoyed exploring Tanis and this time and space in Eason’s verse, Iari and Gaer and the characters around them really shine, just like in the previous novels.

But what about the fantasy elements, you might ask at this point? What about that magic? Where is the blend? The previous two novels (and the first more than the second) leaned into this realm, this verse, having a generous dollop of fantasy along with the science fiction. Here, the arithomancy is very much treated as a science, a defined and codified field of study more than a rawer and more chaotic magic.  Gaer’s skills, and the other arithomancy Gaer and Iari encounter throughout the novel are essentially spells, yes, but they are something that, in theory, can be defined, and known and studied and replicated, in theory, anyway.  However, Eason makes it clear that different species have different types of arithomancy, which helps move it somewhat from outright *being* a science as opposed to being treated like a science.

Where the novel also bleeds into fantasy is where it also bleeds into horror, and that is with the threat of the Brood. Horrors coming into our world from extradimensional rips in space and time are not necessarily fantasy per se, mind you, but they do add a note of something else from elsewhere to the straight up high tech Wunza formula. The Weep and the threat it presents, the extra dimensional wound in reality brings to mind novels such as Adam Christopher’s The Burning Dark, and the two Outside novels of Ada Hoffmann, particularly the second, The Fallen. Unlike that second, particularly, the danger of the Weep and what is beyond it is an unalloyed threat, the Brood is a danger to all, and when the knowledge of their eruption becomes known, the novel adds additional politics and power plays to Iari and Gaer’s efforts to now not just investigate, but to put down a threat which is rising rapidly.

So, then, if genres are a spectrum, and science fantasy is itself a spectrum, Nightwatch on the Hinterlands (which appears to be a first in a new series) is more toward the science end of the science fantasy spectrum than Eason’s previous two novels. I also think, if this review has not made it clear, that for me, this is a far more effective novel in reaching its goals than How the Multiverse Got It’s Revenge, and in some was, this is a better novel for many readers to be introduced to Eason’s work than How Rory Thorne Destroyed the Multiverse.  Along and on the mean streets of Science Fantasy, this novel has an easier handle for a wider range of readers to grab onto, and start to explore the talents of the author. I want to see where Eason goes with this multiverse, here, Eason has picked a time and place where things are changing, trouble is brewed, and there are battle hexes to arrange, mysteries to solve, and dangers to fight.

Bonuses: +1 Definitive and strong improvements over the previous novel on every axis.

+1 A better starting point for readers to this verse than the first novel in the series.

Penalties: -1 This novel does lack some of the joy of the style that the previous novels engage in.