Microreview [book]: Rise of the Mages by Scott Drakeford 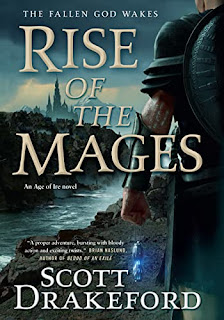 Emrael Ire has a problem. He just wants to be a weapons master and a member of the Legions. His father is missing and getting a leadership post in the Legions would give him a chance to try and find him. So instead of heading to the mysterious island nation of Ordena with his mother (a native to those shores), he stays within the United Provinces, studying the sword at the Citadel. But when a mysterious power play leads to his technologically talented younger brother being captured and Emrael is forced to go on the run, he is forced to not only deal with the political legacy of his bloodline, but the legacy of his own magical talents.

This is the story of Rise of The Mages, first in Scott Drakeford’s Age of Ire novels.

Rise of Mages is a classic, down the old straight track of a young man who finds that he has power he didn’t know or suspect he has, gets himself a mentor with whom he has a sometimes frustrating relationship, gathers other companions (including a love interest) and finds himself leading a force to rescue someone he cares about, sometimes impetuously. The fact that his mentor is a woman (and NOT the love interest) and the drive to rescue  his brother are variations on the classic backbone of the tale.

There are some first novel roughness in the plotting, though, which can sometimes feel like it doesn’t shift the gears smoothly. The pacing just feels off again, and again, and it is painful that the opportunity sometimes gets stepped on in the process. It’s a well thought out world, even if it is along the usual lines. I have to give Drakeford good marks for imagining a fantasy world that is not a stasis frozen in amber and where the only discoveries are re-discoveries. There are people seeking not only the lore of the past or lore from outside, but making new discoveries of their own (particularly Ban, Emrael’s brother). Societies are never static, there may be forces slowing progress and change, but the “everything has been the same way for a thousand years” is a trap that Drakeford avoids, on cultural, social and technological axes.

There is some good interesting bits in how he constructs his magic system. Drakeford takes the classic technique of having his protagonist clueless about how it all works (complete with me? A Magician? Nonsense!), and also being somewhat trangressive of the rules and understood properties of it. We get a good sense of what magic does, and did and what it can do (and what Emrael can do). It appears to be of the magic as a branch of science school of magic, especially in it’s more practical applications.

The best writing in the book is the action sequences and we get quite a lot of them. From one on one combats, to sieges, infiltrations and chaotic scrums of fighting, the novel shines best in the thrill and glory of combat and conflict. Drakeford knows to show how combat and conflict builds and illuminates character and we get a sense of Emrael as a person through the conflicts he engages in.

However, I feel that this book shares many of the traits and issues that Adri highlighted in her review of Richard Swan’s The Justice of Kings. (Review here: http://www.nerds-feather.com/2022/02/the-justice-of-kings-by-richard-swan-is.html).  This is perfectly straightforward and reasonable epic fantasy.  It is an epic fantasy that shows that the writer has skill for a first novel (with some aforementioned issues) but it is an epic fantasy that is of an earlier generation. I have not read Swan’s novel, and only have Adri’s detailed analysis to go on. However, it seems that while Drakeford avoids some of the pitfalls that Adri calls out in that novel--the trio of female characters here aren’t fridged and do have power and skills and agendas, this book does focus on men all the same. The major focus, as mentioned before, is Emarel’s quest to free his brother. (this, following on the heels of his quest to find his father) He is very nearly to the point of monomania on this point, and both Elle (the healer/noble/love interest) and Jaina (The Obi Wan) both have to drag him from a single minded drive to save his brother again, and again, and again.  Emrael winds up getting dragged into the plot, and its course, kicking and screaming. And I never quite got the best feeling why his monomania for his brother struck him so. I *think* I know why, reading between the lines, a strong educated guess, but we don’t get enough to really understand his motivations in that regard that it becomes this all consuming passion for him.

And I think this world could easily have been a queernorm world, if the author had put some effort toward that, but in the end, he did not. I think that is a missed opportunity in this day and age, where building worlds that are inclusive is something that I am trying to look for and cultivate in my fiction reading. I admit that this sort of active searching and looking for these things takes learned practice, and I am still trying to cultivate that in my reading of a text, and more pertinently here the selection of texts. I can only hope and encourage writers to do that in their own writing.

Bonuses: +1 for executing the expected beats of an of epic fantasy, magic system, combat and more in a strong fashion for a first time novelist.

Penalties: -2 for a large number of missed opportunities in transcending those norms.