Microreview [Book]: Home Is Not a Country by Safia Elhillo

A novel written in verse that is both economically and lyrically potent. 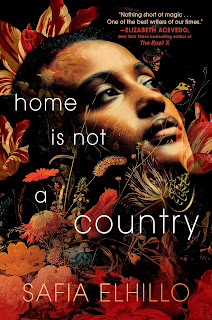 A novel in verse isn’t bound by conventional formatting. Home Is Not a Country isn’t bound by a traditional definition of home. Just how the words on its pages shift and contort in forms that deliver the most impactfully economic messages, so does the protagonist’s sense of place, until the story's transformative structure and plot arrive at a location that dovetail nicely. Home Is Not a Country is a story that I couldn’t see working any better way than in verse. It’s streamlined enormously, often to its benefit. But on occasion it throws away subtlety for bluntness and plotting that feels conspicuously developed rather than fluid and invisible.

Nima is a teenager living in America. She's from an unnamed Arabic-speaking country in a post-9/11 world. Her father is dead, she wishes her mother was different, she wants to be more popular and feels like she can't because of her background. Everything bad that could be happening to her feels to her like it's happening. But then she starts seeing a figure who looks like her--a figure who evokes a sense of magic. The novel jumps between the past and present, arriving at a climax that changes Nima's outlook of both her history and her current values.

Safia Elhillo manages to be both lyrical and fluid in her writing--every sentence is expertly constructed. Whether it be Nima wrestling with her lack of father, her identity with both the positives that come with it as well as the baggage packaged with a post-9/11 America, and her friendship/struggles with Haitham. The writing steps up an extra level in the book's latter half, when the speculative elements are at the forefront. It's used to both raise the stakes and explore characterization in ways inaccessible from realism. Without spoiling, there is history that is uncovered and internal struggles that are fought in such an imaginatively incisive way that could only be brought about from fantasy. That imagination is undercut by a few characters who are key to the story but only feel remotely developed. They all had promising set-up, but by the time the story went into high gear, some characters felt only identifiable by a few markers rather than dimensioned personality.

Home Is Not a Country shows that in face of adversity, looking back with rose-colored, nostalgia glasses isn’t a viable way to survive. The hue might seem more comforting with them on, but if you take them off, you might find that colors that seemed disgusting to you at first glance are much more inspiring upon careful study. If thinking of the past goes down like water, the present is like a jagged pill that will do you good if you take the extra effort to swallow. In this novel, an effort is also needed to feel like you’re truly home. You might not be surrounded by your culture, have two parents taking care of you, or be the most popular person at school—but there is a way to maybe not live at ease but with pleasure. Home Is Not a Country beautifully conveys that and much more, making it a winner that I don't have to look hard at to admire.

Negatives: -1 For some plot points being a little too blunt.