Second Look: The City We Became by N K Jemisin

A second look at N.K, Jemisin’s 2020 Hugo Finalist novel, THE CITY WE BECAME 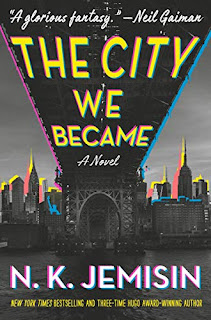 In 2020, Adri Joy reviewed N K Jemisin’s The City We Became, available here at Nerds of a Feather.

With the novel now a Hugo Finalist, and me, as the author, as a native New Yorker having re-read the book recently in audio, I thought a second look  at the book was in order to explore other facets of the novel, and the audiobook in particular. Do read Adri’s excellent review first, as I will be covering somewhat different ground here.

While I had highly enjoyed reading the book in ebook last year, my choice of re-reading it audio, first a way to fill some loose hours in my listening schedule and a way to tag back into the book in order to rank it as a Hugo Finalist on my ballot. I was, however, riveted from the beginning for a number of reasons.

The choice of narrator, Robin Miles, is an excellent choice. Miles has worked with Jemisin before (notably on the Broken Earth trilogy) and has a very good voice for Jemisin’s word choice and sentence style. It’s a wonderfully immersive performance on her part, and her voice kept me listening, to the point of NPR style “Driveway moments” throughout the production. This is a book I could have done even better listening to it on a long driving trip.

The use of sound in the audiobook was inspired. While this is not a full cast production, and just has the aforementioned Miles as narrator, the production is not content to just use her considerable vocal talents. The audiobook employs some sound effects and tricks to help immerse the reader into, particularly, the cosmic horror of the novel in a way that the print novel doesn’t quite manage. (To be fair, the print novel has the map, which the audiobook does lack, but I think that with the choice of that map or the audio tricks and use of sound, it really is a dead heat as to which is better).

Immersion of the city and its characters  is carried by both the sound design and the narrator. Take each of the incarnated boroughs. In each, Miles brings the voice to life, almost painfully so in the personage of Staten Island for reasons I will explain below, but they are not only distinct in overall diction, but also accent. Staten Island’s accent, Brooklyn’s accent, Bronx’s accent are all three different flavors of the diction of New York that really come through. It isn’t so surprising that, given their origins, that Queens and Manhattan don’t show this distinction in diction, but the “native” New Yorkers of the boroughs showcase the variety of accents in New York. I am glad that Jemisin made the choice of having Queens be an immigrant, so that she, and her subsequently voiced accent, is not the nasal Queens accent that viewers of The Nanny mistakenly seem to think is the dominant or only one in New York.

One of the joys of re-reading a book is to come across the favorite bits, the set pieces, the small moments, the character bits, the tapestry of words that stick with you. The audiobook of The City We Became delivered that re-immersion into the world of the novel in spades. From Manny’s awkward introduction to the city (which reminded me, now a bit of The Freshman) to the confrontation on the FDR Drive, to the “Ding Ho”, to the utter out of NYC place beauty that is the abandoned City Hall Station, the novel and all of its goodness came back to vivid life. It made me homesick all over again. And I realize to my horror and shame something I didn’t realize when I read the book--I’ve never been to Inwood Park and seen Shorakkopoch Rock for myself. I need to correct this the next time I am in NYC. The novel, especially in its audio production, loves and adores New York City and its fractally complex multi-faceted nature. New York really does contain multitudes and the novel gets that. Manhattan, Queens, Bronx and Brooklyn each feels like itself, and also New York, and it is joyous.

And then there is Staten Island. Disclaimer: I AM from Staten Island, it is my home borough and in deep ways, that borough still is deep in my DNA, the good and the bad. The darker sides of Staten Island, its proud self reliant standoffish independence, its wanting to be walled off from NYC, if not the rest of America, really came through in this audio edition and hit me in a way that the print book did not. At first it was nostalgia and memory, with Aislyn in the Ferry Terminal, and then into the less charitable sides of what Staten Island is like. I grew up next to very many people like Aislyn and her family, particularly her father. One might even more uncharitably say that if I had had a sister, she could have been a lot like Aislyn, for good and for bad. The City We Became in audiobook gets that Staten Island experience, that Staten Island mentality, mindset and feel in a way that was a bit of a punch to the face. And yet, the fate of Staten Island, however a reader might think is somewhat deserved, is a tragedy to me that pains me, and I am very curious how it carries forward into subsequent books.

Overall, then, listening to the audiobook has had the salutary effect of raising my high opinion of the novel even further. I daresay that the novel is better and more effective in audio than its already impressive result in print, and I will be looking to get the subsequent volumes of the trilogy in audio as well as ebook. Even more than the text, the audiobook of The City We Became brought me fully and irretrievably to the city that I may have left bodily years ago, but has never, and will never leave me. In the acknowledgements, Jemisin says that this novel is an homage to the city and she hopes she got it right.

This ex-pat New Yorker, this ex-pat Staten Islander, thinks that she certainly did.