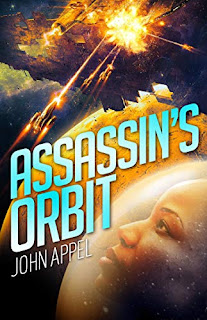 Commissioner Toiwa has a problem. Just as the planet Ileri, one of the planets settled in the wake of people fleeing the memetic Unity Plague on Earth, is set to vote on whether to join a Commonwealth of similar worlds, the Consul from the Commonwealth is assassinated on the space station. HER space station. Worse, private investigator Noo Okereke is sticking her nose into the affair, no friend of Toiwa or station security. Oh, and then there is a spy on board, Meiko Ogawa, and just what she is up to and what she is doing is an additional complication. Plus, there are forces in the Ileri government who will see this as an opportunity to overturn the current order in favor of their own.  And if all that isn’t enough, there are whispers that the Unity Plague may not have been left behind on Earth. These three very different protagonists are going to have to learn to work together, or at least not get in each other’s way, or it will be disastrous, if not fatal, for everyone.

These are the stories of John Appel’s novel, Assassin’s Orbit.

With the recent publication of Adrian Tchaikovsky’s Shards of Earth, and now this, John Appel’s debut into novels, Assassin’s Orbit, there appears to be a mini boomlet in space opera stories set in a verse where Earth, the center, has been removed from the equation, and in point of fact, the power that ended Earth is one that might return in full force and flower and destroy what has been built in the meantime. And, also, the theme of how expatriates, if not outright refugees, try to build a new life far away from a home they cannot return to is one that is very much of this moment.

What we have here in the world of Assassin’s Orbit in this regard is a set of worlds of various levels of power and development, Ileri seeking to join with the stronger, more powerful worlds of the Commonwealth. There is a real clever use of the “Founder effect” of having those who escaped Earth to found new worlds and escape memetic oblivion, to be a diverse set of cultures far removed from the All Western and White Male bastions in many space stations and planets in SF. Women are in powerful and important roles (as seen above, all three viewpoint protagonists), the cultures a wide swath far beyond the usual, and intimations of cultures having evolved, changed, and bloomed after the exodus from Earth.  There are lovely little bits, use of language, and careful descriptions to sketch in descendant cultures and societies that are rich and intensely interesting, all the more so because our characters are such a part and immersed in it.

All this gives Ileri station and our protagonists a diverse and broad set of personalities, cultural beliefs, attitudes and points of view. One thing all three point of view characters have in common, as intimated in the back matter of comparing this to the “Golden Girls” is that all of the protagonists are mature and have long experience. Noo, Toiwa and Meiko all have long histories, life experiences, connections to communities, individuals and governments, and in the case of Noo and Toiwa, history together that gives the narrative extra crunch and friction when events draw them to working on aspects of the same problem.

I was reminded of Babylon 5, too,while reading Appel’s novel.  Watchers of the original pilot movie, The Gathering, will recall that an assassination attempt sets off the action in that movie and drives the plot. Ileri Station does feel like B5 as a place in a number of ways, down to a stratification of power and authority and of course those who work in less than legal circumstances. Pericles Loh, the head of the underworld on Ileri Station, would fit in Downbelow on Babylon 5 just *fine*.  As events progress and things become more dire for the station, Loh provides a potential for help, but one that the straight arrow Toiwa is naturally very reluctant to consider. Loh, though,  is just one of a constellation of secondary characters with long established relationships, not always positive with Toiwa and Noo in particular, Meiko providing the outsider point of view for the station.

The Babylon 5 comparisons also extend to the aesthetic of the novel in terms of action and adventure, and yes, The Expanse, too. Readers will not be surprised that with a plot involving a murdered ambassador, there is space action beats, both inside and outside the station, and these combats, particularly the tactical ones inside of the station, are engagingly and winningly described and executed. The author has a real knack for describing the action, tactics and the visceral terror of firefights on a space station, as well as spacecraft engaged in a deadly ballet of orbits and maneuvering.

The novel tells a complete, concise and well developed story. The plots and various situations wrap up nicely in this novel, although there are some potential hooks for other and further stories at the end of this novel. In addition, the basic worldbuilding set up is definitely bursting with other potential stories to tell. It’s an interesting universe that Appel has created here, and I would like to see more in it, either with these characters, or others.

Bonuses: +1 for a strong trio of engagingly depicted protagonists with history and backgrounds to match.

+1 for an interesting and inventive universe.

Penalties: -1 Some first novel roughness with some of the plotting