The Novella Files: Inside Man by K.J. Parker 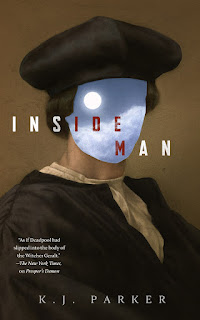 Subject: Parker, K.J. Inside Man [Tor.com Publishing, 2021]
Accolades: N/A
Genre: Fantasy
Executive Summary: K.J. Parker returns to the amoral world of Prosper's Demon with a wry, sardonic novella that flips the eternal, rule-governed battle between men and demons on its head.
An anonymous representative of the Devil, once a high-ranking Duke of Hell and now a committed underachiever, has spent the last forever of an eternity leading a perfectly tedious existence distracting monks from their liturgical devotions. It’s interminable, but he prefers it that way, now that he’s been officially designated by Downstairs as “fragile.” No, he won’t elaborate.All that changes when he finds himself ensnared, along with a sadistic exorcist, in a labyrinthine plot to subvert the very nature of Good and Evil. In such a circumstance, sympathy for the Devil is practically inevitable. (From Goodreads)
Assessment: Inside Man explores the nature of “His” plan—you know the one. The entity that makes some people think the world is either formed from premeditated or off-the-cuff chaos. Similarly, reading frenetic, off-the-wall stories makes me wonder how the author formed their creations. K.J. Parker consistently displays (or at least fools me into thinking) that his stories are carefully crafted and expertly conceived, even at their most chaotic instances.

Inside Man is best experienced having read Prosper’s Demon first, but it’s by no means a requirement. The story lays the groundwork for the worldbuilding quite clearly, but there are some character interactions that are augmented by prior exposure to the series. The banter between the demon protagonist and their nemesis-exorcist-turned-accomplice is vibrant and engaging—even more so than in Prosper’s Demon. And the workings of the demon world had a Pratchett-esque feel to it that swept me up in a world of witticisms and boundless creativity. Whether it’s their unique bureaucracy, history, or machinations, I was always gleefully enraptured. Prosper’s Demon might be the superior story in terms of dramatics, but I found Inside Man to improve the series on what was already a strong sense of humor.

My one complaint is that the story didn’t fully possess me until about a third into the novella. It covers a lot of groundwork at first, and looking back, I’m not quite sure all of it was necessary. But once the story finds greater focus, it moves with zippy and twisty momentum. It’s impressive and baffling how many intelligent turns the story takes while never coming close to muddling itself into convolution. And those countless turns in the latter half of the story always informed the world and themes. The themes on predeterminism, dissenting when feeling voiceless, and faith, are able to bounce between the narrative of the mundane and demon world, encompassing settings that are dichotomous in nature into thematic unity.

Inside Man lives up to Prosper’s Demon quality. It ends in a fashion that could be a fitting conclusion to the story but also leaves room for exploration. If K.J. Parker writes another sequel, I have no doubt it’ll at least appear thoroughly planned out. It might be blind faith in an entity I’ve never met, but he’s deserved it.