As the resident cult film nerd here in the flock, sometimes a book pops up that's just so exactly up my alley that I really don't have a choice in the matter. That book simply is going to be coming home with me. A few summers ago it was Dirty Words and Filthy Pictures, about the evolution and eventual breakdown of film censorship, and this year, well, the wife found me two such books that are now demanding my eyeballs. And Summer Reading Lists being what they are, now I get to share them with you!

1. Glamour Ghoul, by Sandra Niemi
This biography of Maila Nurmi, the woman who created and played Vampira, the first late-night television horror host, was written by her niece. It was created through a combination of family history learned from her father, Maila's estranged brother, and the diary entries, tapes, and scraps of never-finished autobiography that Maila had assembled over the years, and Sandra came into possession of after Maila's death. I first learned of Vampira, like many other people did, from the Tim Burton movie Ed Wood, which was a transformational movie for me. It introduced me to outsider cinema at just the right age and in just close-enough proximity to a non-Blockbuster neighborhood video store. But Maila Nurmi, the woman behind Vampira, was always a mystery. She was the life model for Disney's Maleficent around the time of her Vampira fame in the 1950s, but by the 1980s was impoverished and unsuccessfully suing Elvira for stealing her act. Maila died not long after I moved to Los Angeles, and was reportely living in dire poverty, trying to scrape by on occasional jewelry and artwork sales. There was no money for internment, and some of her acquaintances reached out to fans to get Maila a plot at the Hollywood Forever ceremony. A few years later, there was a second fundraiser to purchase her a fitting tombstone, and I contributed to that effort. I am very excited about this book, and about learning how the few dots I know of connect in the life of this singular personality.

2. Play the Way You Feel: The Essential Guide to Jazz Stories on Film, by Kevin Whitehead
In an animation class I took in college, we watched some early Betty Boop cartoons that had live-action footage of Cab Calloway and His Orchestra included in them. I love Cab Calloway, and seeing this footage was more exciting to me that even the way out-there, surreal ghost-trip that was the cartoon. A few years later, when you could walk into a Walgreens or Rite-Aid and see a spinning carousel of $1 DVDs of programs you probably never heard of and had fallen into the public domain, I discovered more films featuring Cab Calloway, as well as Duke Ellington and his orchestra, performing in the 1930s. These are gems of early jazz. There are also animated films made by John and Faith Hubley in the 1960s featuring Dizzy Gillespie, sometimes just as a voice actor, but sometimes performing, that I've been a fan of for a long time, and recently I've been able to catch landmark films with jazz performers on the Criterion Channel, such as Shirley Clarke's Ornette: Made in America, about Ornette Coleman. If this book is what it announces itself to be — the definitive guide to jazz on film — then I expect to discover many more gems I would not otherwise come across. 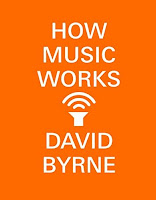 3. How Music Works, by David Byrne
I have to be honest — I don't really know too much about this book. I don't know if it's mostly biography, or theory, or ruminations on music in general and in specific. It's probably not a cookbook. But I think I kind of want to be David Byrne when I grow up, so it seemed like a sure thing. 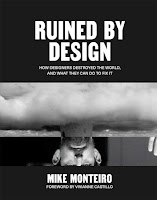 4. Ruined by Design: How Designers Destroyed the World and What We Can Do to Fix It, by Mike Montiero
My drummer, who is also a UX designer doing really good things for great organizations, gave me this book. It's about design ethics with an emphasis on Silicon Valley, tech start-ups, and social media platforms. The central premise is that these companies and applications that have found their way into almost every corner of our daily lives are doing tremendous harm, and that's actually on purpose. They are working the way they were designed to work. So this book, then, is an attempt to engage in a conversation about and for the designers who are employed by these companies, and who are asked to do unethical things, or things that can easily be twisted into unethical uses. Doctors have a code that begins with "do no harm," architects are having conversations about whether or not they should be involved in designing facilities like super-max prisons, where people are routinely treated in dehumanizing ways, and this book suggests designers need to be having the same kinds of conversations.

5. The Girl Who Drank the Moon, by Kelly Barnhill
When this book was released in 2016, it quickly became a favorite of the site. After Joe's wonderful review, I grabbed the book and read it to my kids. And then I read it again. And then I read it again. We just did a big reorganization of bookshelves, and one of my kids found our hardcover of this pushed back behind another book. It had been at least a year, probably closer to two, since I last read it to them. She found the book, then found me, put it in my hand, and said, "You're going to start reading this to us again. Tonight." Who am I to argue?

POSTED BY Vance K — cult film reviewer and co-editor of nerds of a feather, flock together for a long time now. Maybe one of these days he'll have a Hugo Award above the fireplace to show for it.