Ahoy, fellow readers! Welcome to July’s Questing in Shorts, where I round up another month in short fiction reading and tell you all about the things I enjoyed (or sometimes didn’t). This month, I’m filling short fiction notebook number 2, which is this beautiful purple number with a whippet on the cover: 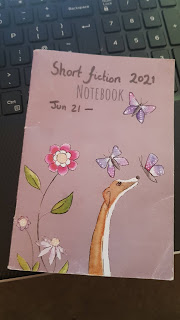 Notebook number 2 is a little beaten up from coming to my brother’s wedding (it also has an "items to pick up from the house” list written in the back) and unlike last month, I didn’t manage to fill an entire book in a few intense days of short fiction. But I’m over halfway through filling it, and the magazine folder is looking less intimidating than it has in the past, so that’s all good.

Besides the notebook, the other news is that I’m once again a judge for the British Fantasy Awards this year, and this time I’m judging in the Magazines and Periodicals category! Most of the finalists involve short fiction in some form and there’s a mix of venues I’m familiar with and those that are new to me, so I’m really looking forward to exploring what all of them have to offer. 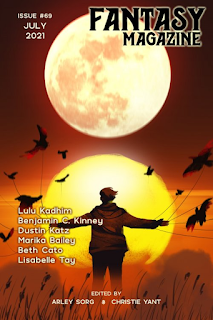 Let’s kick off with a new-to-me publication! Fantasy Magazine was kind enough to send me their July issue, with a quartet of stories whose unifying theme seems to be “a bit spooky”. Lulu Khadim’s “A Softness of the Heart” is a sweet ghost story about Louise, a girl who lives with one aunt and is advised by the ghost of another. I love a cosy matter-of-fact ghost story and this one delivers a family story with just enough interpersonal prickles to make its resolution satisfying. “There Will Be A Question and Answer Period After Your Inevitable Demise” by Marika Bailey reimagines the afterlife of an archetypal hero, putting the classical portrait of masculine prowess on a conference call where he must hear from the “monstrous” women who suffered as a result of his deeds.

My favourite story of the issue is “I Would”, by Benjamin C. Kinney, a great piece of secondary world fantasy from the perspective of a seer imprisoned by a bandit queen. As the seer navigates possible futures with two visiting women, who themselves are trying to escape her captor, she has to work out what is possible and what she – as someone used to thinking of herself as powerless – needs to do to make it happen (and maybe to end up kissing one of them at the end). The diverging future paths are a great device, one which really captures the feeling of someone trapped and desperately seeking their only path towards freedom. 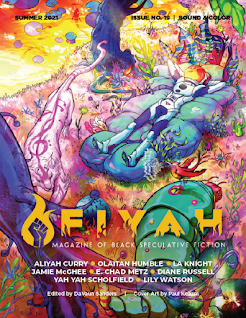 Issue 19 of FIYAH is "Sound and Color", and within that theme lies five quite different, vibrant stories. I almost wish I’d covered this one last month because then I could have remarked upon how excited I was to come across “Lungs” by Lily Watson so soon after reading “Concerto for Winds and Resistance” by Cara Masten DiGirolamo, which I covered in June's roundup. Where DiGirolamo’s piece uses an orchestra to tell a broader story (and drops the curtain as soon as the first “real” note is played), Watson’s really focuses on bringing to life the magic of collective music, its string group overcoming the challenge of the piece before them (and their own hierarchies) to bring a God to life. Evocative stuff.

This issue also has "Meditations on Sun-Ra’s Bassim" by Yah Yah Scholfield: I loved Scholfield’s last story with FIYAH and this one is just as excellent, a one-sided epistolatory narrative from a space traveller to her sister back on the planet where they grew up. Even though we only get one sister’s voice, the story evokes such a rich family bond between its two leads, full of snarky affection and yearning for connection both across physical distance and the experiential gap of their very different lives. The story’s journey goes super well with the other two – significantly more tense – journeys in this issue: “Morning”, by Diane Russell, features a girl and the clone of her sister sent on a hopeless mission in a failing space colony, with all the pain points that suggests, and Where the Sky Becomes Milk by Jamie McGhee is a backwards story of a boy trying to find his way home through a difficult sequence of locations, the purpose of his journey unfolding as we get closer to its beginning. And to round off the issue, L.A. Knight’s story offers a great speculative take on disability, work and escapism, with a disabled jobseeker who fails to find work that will appropriately accommodate them - until approached by the supernatural entity responsible for creating portals to other worlds.

Not only did I read some stories with my eyeballs this month, but I also listened to two of them via the magic of the podcast! Both "Three For Hers" by Filip Hajdar Drnovšek Zorko and "Pull" by Leah Ning are original to Podcastle, and both offered very different listening experiences. The latter is a quietly tragic slice of life story about an old man caring for his ill, superpowered wife (I’m pretty sure she is supposed to be a siren?) who can “pull” people around her into doing things and also into dreamscapes and memories – a dangerous thing to happen when implied dementia is taking away the shape of those memories. Three for Hers is a highly atmospheric fairytale-like story, about a woman in an occupied land who goes to work for a vicious, abusive Margrave who insists that nobody around him show emotions. Vida’s experiences in the Margrave’s services, and her quest for revenge, all come to a very satisfying conclusion. As you’d expect, the narration is excellent too.

Two longer stories from other publications really grabbed my attention. The first is Kuemo of the Masks by Naomi Libicki, in Giganotosaurus. A troupe of players are captured by bandits and pushed to put on a show, using the special, magical masks that the protagonist’s mother had left her for just such a dangerous occasion. Of course, neither the masks – which represent archetypal deity figures whose stories are told in the plays – nor the bandits are who they seem, and everything takes a real turn once the story ends up in the underworld. The narrative voice – and the implied story-within-a-story structure, which we only get clarity on at the end – are both great in this one. 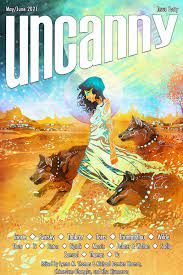 In Beneath Ceaseless Skies, The Witness Bruska Lai by Aaron Perry (issue 333) grabbed and held my attention through a dense, high-context mystery in a world where all dead and future royalty live in a single palace, designed so they can keep separate but simultaneous spaces through the different ages. Perry not only sets up a very weird story setting in a straightforward, reasonable way, but also creates a mystery – that of a missing Princess – that only makes sense with the context of that worldbuilding. It’s brain bendy, but it works brilliantly, and I loved the imagery of the complex, colour-coded palace and its supposedly genius inhabitants.

Two stories in Uncanny Magazine Issue 40 stood out for me: "Unseelie Brothers, Ltd." By Fran Wilde, which has outstanding worldbuilding and some very imaginative sartorial creations all in the context of a fae dress shop whose dresses are beloved by high society regardless of price; and "Heart Shine" by Shveta Thakarar, whose overlooked protagonist gets a firefly prince to remind her of her own worth. Both hit me directly in the feels and have some wonderful character relationships to watch out for. 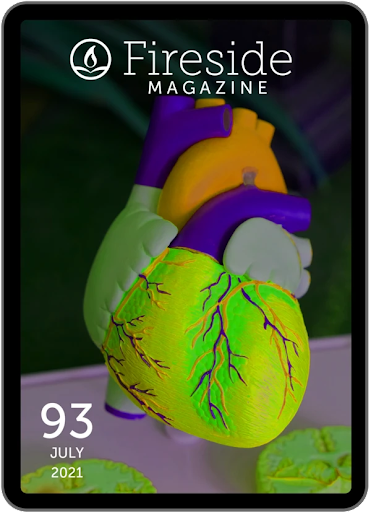 Finally, I resubscribed to Fireside Magazine this month after a couple of years away, and July was a really intriguing point to restart with its quartet of mostly-future dystopian concepts riffing on inequality and injustice and how our societies shape the value of human beings. There’s an intriguing set-up and a very satisfying payoff in Ann LeBlanc’s Across the River, my heart, my memory, a story of stolen sentient organs, and Forest Thing is a creepy look at academia and environmental catastrophe, told through the eyes of a Black student ostracised by her peers and suffering the effects of living in a poisoned environment – though, again, the payoff is one of satisfaction and belongong rather than lingering on body horror. I’m intrigued to see what August brings.
Posted by Adri Joy at 12:00:00 AM