Listening to the Hugos: Fancast

This year’s lineup has some familiar names: The Coode Street Podcast, Fangirl Happy Hour, Galactic Suburbia, and The Skiffy and Fanty Show are all previous finalists, with the first three of those having been finalists last year and Galactic Suburbia previously winning in 2015. In the eight years of the category, The Coode Street Podcast has only twice missed the ballot and both times during the Puppy years. In 2015, it was one vote off of the ballot and in 2016 it would have missed the ballot regardless of shenanigans. Of course, both Fangirl Happy Hour and Skiffy and Fanty would have made the ballot in 2016, so that’s a rabbit hole we can go down forever.

Only one of the fancasts I nominated made the ballot, that being the ever present Coode Street Podcast. In particular, I feel the lack of Sword and Laser not being a repeat finalist this year. That was one of my great discoveries after being a first time finalist last year. Also, I briefly got to meet Veronica Belmont at the Losers Party and tell her how much I enjoyed the podcast. Embarrassingly, I didn’t realize the gentleman she was with was her co-host Tom Merritt until much later, so I completely missed a) congratulating him and b) acknowledging his presence in an otherwise really quick exchange near a beverage line. So much fail on my part. Sword and Laser is still an absolutely lovely podcast and one of my favorites to listen to. I’d love to see SFF Yeah make the ballot some year, the excitement of Sharifah and Jenn is infectious. Jay and Miles X-Plain the X-Men should really be recognized for their X-cellence in podcasting, X-specially since they hit a side of fandom that is not often recognized in this part of the ballot. Ditch Diggers is still crushing it, but I’m not sure if they declined their nomination after winning last year.

Fancast suffers from some of the same issues that many of the down ballot categories do, though perhaps “suffer” is the wrong word. There is a lot of institutional memory built in here for fancasts which are consistent year after year. With a core of listeners who are frequent participants in the Hugo Award process, it is not surprising to see a number of finalists come back year after year. I’ve said this about a number of other categories, but it does make me wonder a little bit about the health of the category, but on the other hand it does also give a snapshot of what the genre and fan conversation and communities may have looked like over a several year period. A positive takeaway, though, is that the only repeat winner was SF Squeecast in the first two years of the category. Both Be the Serpent and Our Opinions Are Correct are new to the ballot and are new to being a podcast.

Shall we lend these fine podcasts an ear? 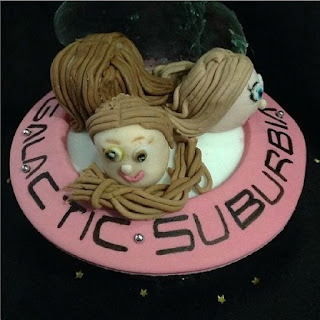 Galactic Suburbia is an Australian fancast which has now been a finalist for the seventh time. It previously won in 2015. I am now on my third year listening to it very specifically for the Hugo Awards because I want to be fair to each finalist when voting in a category, but this has never been among my favorites in any given year. I appreciate that Galactic Suburbia is very much a conversation between friends and we’re just listening in, it is also quite clear that this just is not the podcast for me. 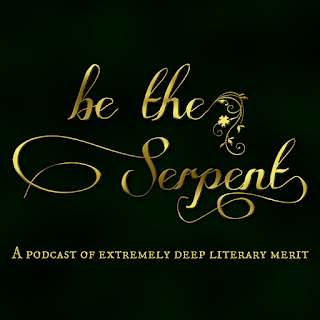 Be the Serpent is hosted by Alexandra Rowland, Freya Marske, and Jennifer Mace. I listened to Episode 7 (Who Lives, Who Dies, Who Tells the Story) and Episode 19 (You and Me and Our Boyfriend Makes Three) for consideration and randomly, one more recent episode (not for consideration) that was published right after the announcement of the finalists in the hopes that Be the Serpent would be my new favorite podcast. It was not. I dig the interplay between the three hosts and how they play off of each other, but where I wasn’t grabbed by the podcast was that I was generally only interested when they were talking about something I was already interested in, rather than wanting to float along on the wave of their conversation into topics that I didn’t know much about. That’s really the mark of a podcast that works for me, when I want to go on a journey and discover a new bit of awesomeness. As a general rule, discussions of fanfiction don’t work for me. Unexpectedly, those fanfictional discussions at Be the Serpent work for me more than I expected but not enough that I wanted to keep on with most of those conversations. Rowland, Markse, and Mace are very engaging hosts and Be the Serpent is just on the edge of a podcast that I want, but isn’t quite there. I’ll give it another shot next year if Be the Serpent makes the Hugo ballot a second time. 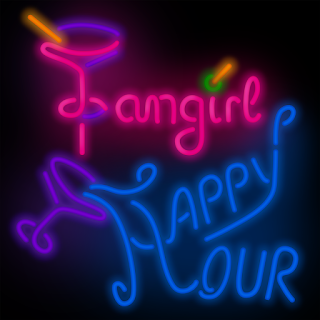 Fangirl Happy Hour: Hosted by Renay Williams (Lady Business) and Ana Grilo (The Book Smugglers), Fangirl Happy Hour is a three time finalists for Best Fancast. I said this last year, but what I like best about Fangirl Happy Hour is the passion of both Renay and Ana. Straight up, they care. They are about what they love and they care about the genre. From their discussions I am reminded that everyone comes into science fiction and fandom from different directions and via different media, that there is no “one way” to be a fan or to be part of fandom because fandom is not a single discrete entity, but rather a large bulbous mass of smaller fandoms that intersect and cross pollinate and stay the hell away from each other. I may dip in and out of Fangirl Happy Hour as the mood or the season strikes me, but they are a vital part of the genre conversation and we’re better off because they’re here doing the work. 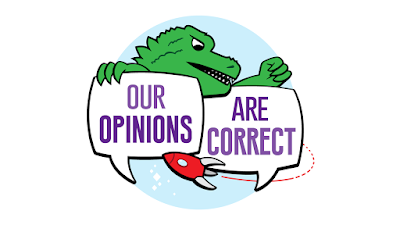 Our Opinions Are Correct: It’s fairly impressive for a podcast barely a year old to pick up a Hugo nomination, but when that podcast is hosted by Charlie Jane Anders and Annalee Newitz there’s no question that listeners will find it and pay attention. They describe themselves as a science writer who sometimes writes science fiction (Newitz) and a science fiction writer who obsessed about science (Anders), and I wonder if it is that intersection that informs how they put together this show. As a general rule, they’re not talking about the hot book of the moment or the new genre conversation of the week. Each episode is themed to a particular topic and how it relates to science fiction, whether it is capitalism, Doctor Who, democracy, utopias, or transgender science fiction.

I do listen to Our Opinions Are Correct, but I’ll often let an episode sit for several weeks while I listen to something else. It’s not appointment listening for me. I mostly like the podcast, but I’m not as enthusiastic as I thought and hoped I would be. Also, I absolutely hate the theme music. Our Opinions Are Correct is chock full of smart conversation and is definitely one to check out if you’re looking for a SFF podcast that’s not *just* book talk. 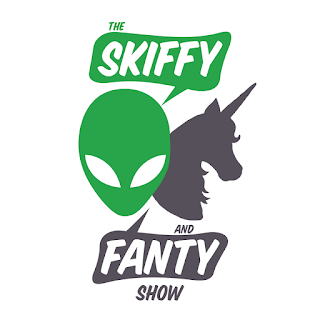 Skiffy and Fanty: This was a bit of a surprise for me. The Skiffy and Fanty Show was on the periphery of my consciousness for a number of years now. I think I tried an episode when I first started to listen to podcasts and it didn’t grab me at the time. I’m familiar with one of the producers, Shaun Duke, from the old blogging days. One of the Skiffy and Fanty hosts is the ubiquitous Paul Weimer, which astute readers will recognize as one of our staff writers here and from pretty much everywhere in the genre conversation. Since I wasn’t a regular listener, I picked three of the episodes noted in the Voter Packet. I listened to Ep 347 (Black Southern Specfic: A Discussion with Eden Royce and Troy L Wiggins), Ep 353 (interview with Rebecca Roanhorse), and At the Movies #67 (Black Panther, w/ Faridah Gbadamosi, Justina Ireland, and Brandon O’Brien). These were all fantastic conversations! I was engaged from the first minute and I wanted more.

Skiffy and Fanty appears to be a monthly episodic show for the main numbered episodes, but Skiffy and Fanty is also comprised of sub-shows under the umbrella – Torture Cinema, Reading Rangers, Speculative Fiction in Translation, Righteous Kicks, Totally Pretentious, Screen Scouts, Signal Boost, At the Movies, Thrawn and On and On, Into the Wardrobe, and possibly something else that I missed in checking out the “Full Experience” feed. There’s a lot of content.

Maybe it is because I further cherry picked episodes I was interested in from an already curated recommendation list of episodes, but I am excited to listen to more from Skiffy and Fanty. The “Full Experience” is likely to be much more than I’m looking for, but I’ve subscribed to the feed of the regularly numbered episodes, which appears to be mostly interviews and curated discussions. 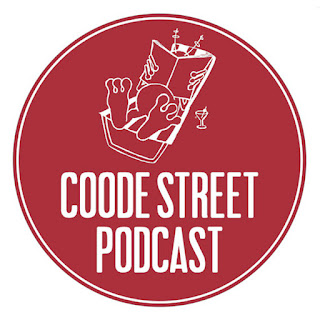 Coode Street: Hosted by Jonathan Strahan and Gary K. Wolfe, The Coode Street Podcast is the one I have most consistently listened to over the years and have come to most look forward to the intermittent episodes as they are released. It is always a delight and a treat when I see a new Coode Street episode pop on my podcast feed. Strahan is one of the preeminent editors working in the field today and Wolfe is a noted genre critic and commentator. The conversation is easy, friendly with a couple of very light jabs when they disagree on a point or on a book, and the best way I can describe Coode Street is that it is like sitting at a bar next two guys who are having a really great conversation. It’s clear they know SFF, though it’s equally clear that they have their own blind spots and preferences that I don’t always agree with. There seems to be a marked preference (at least on the part of Strahan) to have the Hugo Awards be more for science fiction than fantasy, and a common refrain is to clarify that a particular work is or is not science fiction (or fantasy). That is one of the places I butt heads with their conversation is that I am big field science fiction for categorization (by which I mean that I often use “science fiction” to mean science fiction, fantasy, and sometimes speculative horror – mostly because I don’t often say speculative fiction in conversation) and they often seem to feel that it is an important distinction whether a work is science fiction. That’s picking a nit, though, because this is the science fiction podcast I look for first, especially when we get around award season, end of the year lists, and looking forward to the next year lists. I love that stuff.


My Vote
1. The Coode Street Podcast
2. The Skiffy and Fanty Show
3. Our Opinions Are Correct
4. Fangirl Happy Hour
5. Be the Serpent
6. Galactic Suburbia