Jaime Lee Moyer’s Brightfall provides a new and magical spin on the post-Merry Men life of Marian, Robin and his companions in Sherwood Forest 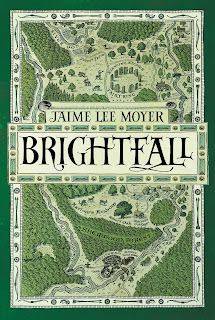 The rebellion led by Robin, Earl of Loxley, and his companions in Sherwood Forest is long since over. The companions, while in touch, have mostly gone on their separate ways  Even the power couple of Robin and Marian are estranged, Robin having gone to a Monastery years ago for reasons not very clear--especially since this leaves Marian as a  single mother to raise two children. Fortunately, Marian’s powers as a witch help make up the gap. However, when it turns out that members of their former band  and their loved ones are dying in mysterious ways, Marian suspects a Faerie connection, and she will have to work with her estranged husband to find the truth of what is happening and why before that death comes for her and her children.

This is the core story at the heart of Brightfall, a Historical Fantasy novel by Jaime Lee Moyer.

Robin Hood stories are of course extremely common, it is a legend, story, myth that is endlessly reinventable for any time and place where there is injustice, power imbalance, and those who would give up their own comfort and power to help others. It’s one of the core stories of humanity, and many cultures have one. The swiss marksman William Tell is very much in this same vein as Robin Hood. Zorro also gets some of his roots in Robin Hood. A book I read last year,  a Chinese literary classic, The Water Margin by Shji Na’ian, could be thought of very inaccurately as “Robin Hood in Song China”.

Less common, however, is exploring what happens when the true King (Richard the Lionheart in the case of the Robin Hood myth) has returned. It is usually happily ever after, into the sunset, and the story ends. You occasionally get a movie like “Robin and Marian” but they are rare. MOyer decides to venture into the same sort of territory. Marian and Robin married after the well known events, but then parted years ago for reasons only fully explained and realized in the narrative. The Marian that Moyer describes is a single mother, stronger than she herself thinks, independent, nurturing, caring and willing to do what is necessary to protect those she loves. Making her a witch and connected to the decaying world of Faerie, whose influence on England is surely and steadily waning, gives her additional agency as well.

The other characters in the novel, human and otherwise, are the strength, power and richness of the novel. Beyond Marian herself, Robin comes off as a prat at first, someone to intensely dislike and hate because of his abandonment of Marian. The reasons how and why he did so, and his ultimate connection with the unraveling of the plot, humanize him to a degree, but the writer’s and reader’s intended sympathy comes off the page intended for Marian. Even by the end of the novel, I still thought he was a prat for his actions, even if I ultimately understood the how and why of them by the end of the novel.

Marian, as a witch, has a bond with animals, magical beings, and the Fae. These connections help make Marian Moyer’s in a solid and unique way, making her stand out and providing plenty of characterization. and I particularly liked Bridget, the fox.  There is also a dragon, much diminished in these less magical times that she lives in. The Fae themselves come across as alien, inhuman, oddly passionate, strange, ethereal and in the end, characters of their own. It came as no surprise to me how the ultimate antagonist of the book was tied to the main characters of the novel. The problem and issues are very much social and character based ones, and even if the Fae are alien, the motives of the ultimate antagonist makes sense in that alien context. Solid and deep character relationships are a core feature of Moyer’s books, and Brightfall continues in that tradition.

And yes, since this is a Jaime Lee Moyer book, there is a ghost involved in the doings.The ghost’s identity and tie to the narrative, and to Marian, and ultimately to the plot, make sense, although I think it could have been fleshed out a tiny bit more. As it stands right now, the ghost’s presence feels a tiny bit vestigial for my tastes. The ghost is for the most part much more relevant to the character of Marian than to the plot itself, but we don’t feel that as much as we might or should.

I did like the Sherwood Forest that Moyer depicts. The cover of the book is a map of Sherwood Forest itself, and there is a good sense of place that we get to 14th century Sherwood Forest. We get a variety of settings, starting with the relatively safe and protected home of Marian, and journeying outward to more stressful and more fraught locations for Marian. The geography of the story gives the sense of a journey outward from relative safety into a more dangerous world, to confront a danger that, unaddressed, will eventually come and destroy that haven of safety, even as all of this occurs within the bounds of the famous forest.

Overall, Brightfall is a strong character study of a post-Sherwood Marian, with a good set of characters around her that richly fill her magical forest.
---

Bonuses : +1 for a really strong and well developed main character and character relationships throughout the novel.

Penalties : -1 A little lack of use of things like the Ghost and a few other aspects of the world could have used some more heft.

Nerd Coefficient: 7/10 An enjoyable experience, but not without its flaws