Microreview [book]: There Before the Chaos, by K.B. Wagers

K.B Wagers’ There Before the Chaos returns to her Indranan War space opera universe with the start of a brand new series where she is not afraid to “Blow up Vulcan” 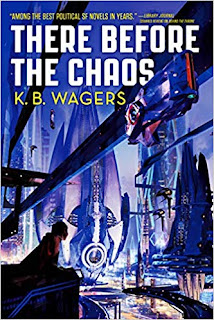 The Indranan War series[Behind the Throne, After the Crown, Beyond the Empire]  introduced us to Hail, green haired gunrunner. She also happened to be a Princess of the Indranan Empire who had fled her birthright for a life in the wider galaxy. That first series is about her forcible return to the Empire by agents of her dying Mother, as threats from without and within threatened to pull the Empire to pieces. The series ended with her as Empress in her own right, and the threats, external and internal, quashed, at costs both personal and empire-wide.

Now, in There Before the Chaos, Empress Hailmi Mercedes Jaya Bristol finds that uneasy lies the crown indeed, especially with a galaxy on the verge of fiery conflict.  The novel picks up not long after the events of the first trilogy. The Empire is in the slow process of rebuilding after the previous conflict and attempted usurpation. The Saxon Empire, their neighbor and antagonist, are still coming to terms with Hail’s outmaneuver of their expansionist efforts, all part of the grand scheme against Indrana.

The heart of the novel comes, however, with the Farians. The Farians, introduced in the first series, are a secretive ancient alien species and have astonishing powers to heal or kill with what are basically psychic powers, as well as an apparent ability to foretell the future. Revealed in this book for the first time, the Shen have had a long standing conflict with a splinter faction of their species, the Shen. After thousands of years of conflict, that conflict is rising in tenor and volume and now starting to spill into Human space. Both sides look to Hail as a possible intermediary to help solve the conflict, seeking to have them promote their point of view.  And then there is the Farian healer Fase. Fase, the Farian we saw in the original series, who performed the unspeakable and forbidden--bringing back someone from the dead, is in a faction of her own, convinced that there is a different future at stake--one that Hail is also a part of.

Character beats are a strong part of why I love this series. Readers really should read the first series  before starting here, because while the author does summarize events pretty neatly in the pages, the character beats are where this novel shines, and it is the character development that relies on the first three novels, and then bridges beyond them, that the novel really does best with. Hail has been through a lot, personally, in the first three novels, and this novel doesn’t pull any punches in showing the psychological effects of those events in her life, now. She is Empress, but she has been changed, even damaged in some key ways from her experience, and this novel is all about the consequences of what she has been through.

The other strain that the novel explores hearkens back again to the original trilogy and is an interesting reflection of it. Hail’s return to the Empire, as mentioned above, was a forced and unwelcome one, Hail was quite happy to have left the Empire behind forever. When she left, after all, she had older sisters, a healthy mother and in a real sense was supernumerary and surplus to requirements. The machinations that caused her mother to bring her back and her eventual rise to the throne changed all that. But once on the throne, you can take the gunrunner out of space, but can you take the space out of the gunrunner. Both internally and externally, the novel explores Hail’s relationship with her role as Empress--does she really *want* to be Empress? Would a chance for her to escape that role and life be something she might be tempted by? Is Hailimi at heart a Gunrunner, adventurer, freebooter, or the Empress of Indrana? This central character question is at the heart of this book.

Above and beyond Hail herself, though, the character development and interactions between Hail and “her people” are a key thing that drives through the novel. From her former gunrunning mentor Hao, to her Ekam (head bodyguard) Emmory, to the rest of her team, they too have been through a lot, and we get to see character tension, interaction and growth within them, between each other and between them and Hail in a realistic and often painfully true way. Uneasy lies the crown, and Hail’s found family is part of that unease. There is a key passage where one of Hail’s people makes a key choice, one that cannot be taken back, and the consequences of that choice are huge, personally, and otherwise. This choice winds up driving plot. Wagers’ style of using personal motivations, ultimately to drive drama and plot are crystallized and exemplified in this choice.

The novel doesn’t have quite as much action as some of the previous novels, which is a bit of a weakness, since action beats are something the author works rather well.. This is a novel a little longer on the political machinations and beats rather than more traditional action beats. Hail is trying to keep her Empire together and rebuild it after the events of the original trilogy. The tension is still there, the life that Hail led as a gunrunner marks her, marks her style, and marks those who would deal with her on a political basis. The politics of the galaxy of the Indraran War universe are interesting, complicated and multi sided. Readers who want Politics in Space and thrill at the idea of various polities maneuvering diplomatically as possible preludes to war or other action are going to love these sequences. There are also internal politics as well, as Hail learns how to reign as well as rule the Empire, and all are not happy with her on the throne.

The novel does conclude, though, with an absolutely amazing set piece action sequence that has come out of and is because of all the other stuff that has happened previously. The political machinations, the carefully laid character motivations, the galactic reactions to those character beats all combine into a sequence that kept me turning the pages at the back of the book, absorbed in a sequence that could have come out of Mass Effect. This firecracker ending, too, shows that Wagers is willing to really upset the status quo of her universe, and, like the 2009 Star Trek movie, make a radical “Blow up Vulcan” approach.  This is how you end a novel in a series if you want the reader to salvate and want to read the sequel (out in several months at the time of this writing) immediately.

I do think that the novel tries to stand on it’s own with summations of the plot and the basic premise and setup of what has happened is enfolded well. With a character focused drama like this, however, I don’t think that Wagers’ attempt succeeds. Her style and her universe rely on those deep character beats and without having read the first three novels, the central questions of the novel, I think, don’t quite have as solid an impact on readers.

Especially for existing readers, though,There Before the Chaos convincingly and winningly starts a new series of novels with one of my favorite Space Opera characters in recent years. Especially given its firecracker of an ending, I am eager to read the next novel, Down Among the Dead, when it comes out. Long live the Empress!

Bonuses : +1 for very strong character beats and character development
+1 for willing to shake up her universe and explore the ramifications.

Penalties : -1 for not quite successfully standing on its own compared to the previous series.

Nerd Coefficient: 8/10. Well worth your time and attention (If you have read the previous novels), 7/10 otherwise.