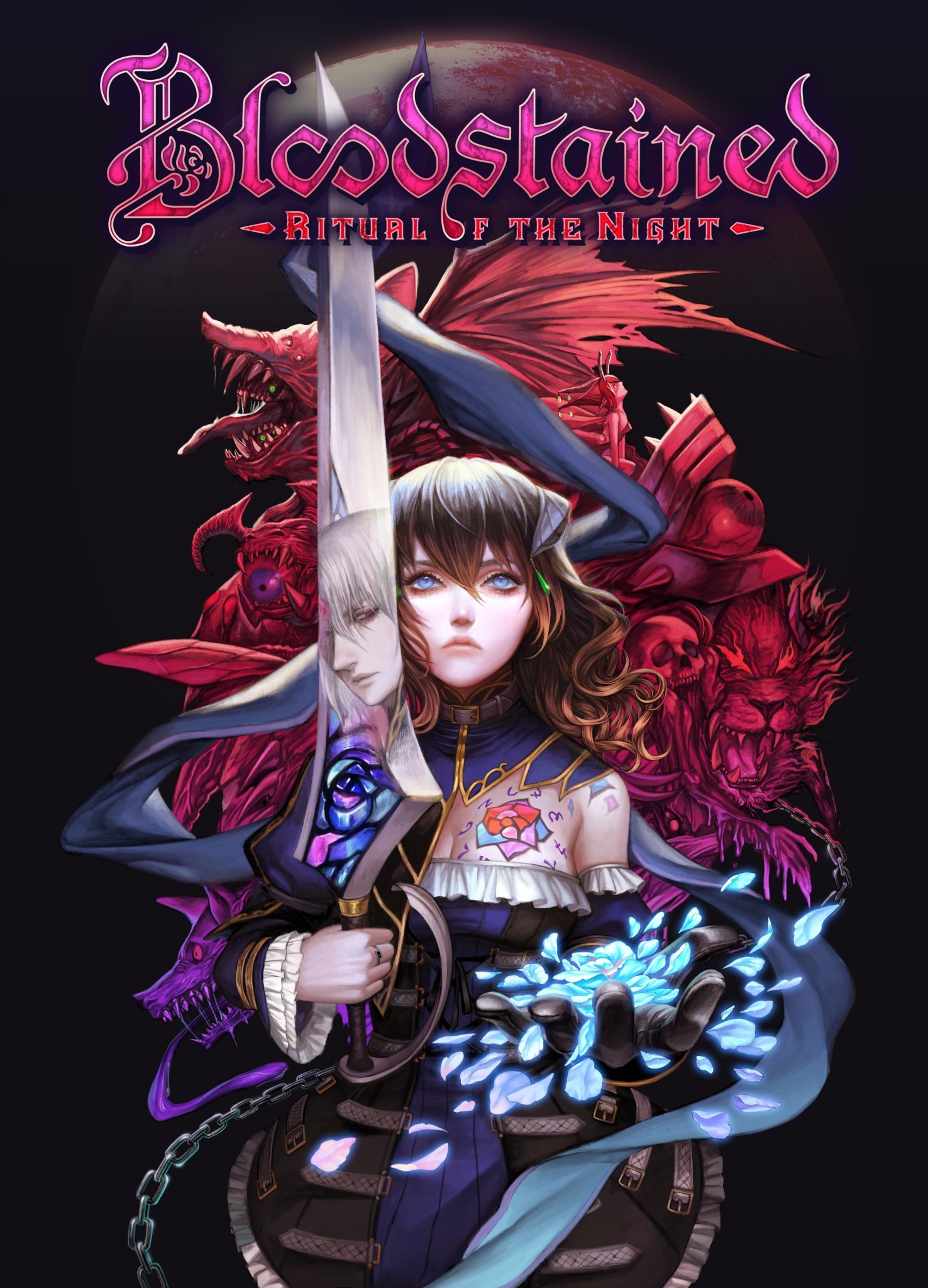 Koji Igarashi was responsible for a handful of my favorite games, namely Castlevania: Symphony of the Night. When he left Konami and landed on Kickstarter with Bloodstained: Ritual of the Night and a promise to deliver an Igavania game like he’s given us before, I was 100% on board. Symphony is over 20 years old now, but it’s a timeless classic, and his other Castlevania games could be spoken of in the same breath. Could Bloodstained: Ritual of the Night, a spiritual sequel to a beloved classic as we’ve seen crowdsourcing attempt to replicate countless times before, live up to those sorts of expectations? The answer is no but it’s complicated.

Crystal shards, demons, a person wronged, and a labyrinthine castle; those are the ingredients of Bloodstained’s story, which is wholly ignorable for 99% of players. It’s just not particularly interesting nor is it the focus. This is an action platformer in the same exact vein as previous Iga-produced Castlevania games, but more namely, the Aria of Sorrow and Dawn of Sorrow games. Both of them have a mechanic that’s copied almost wholesale into Bloodstained, which is the collection of enemy abilities and enhancements. Killing enemies will sometimes result in a “shard” ability. Sometimes this means you will be able to replicate an enemy’s attack, like throwing a bone. Sometimes it’s a stat boost. Sometimes it’s a little familiar that floats along with you and helps in some way. Regardless, beyond the collection of weapons, armors, consumable potions, food, and crafting ingredients, this shard collecting gives the game a “gotta catch them all” feel as you repetitively slaughter these demons to collect their goodies.

Bloodstained: Ritual of the Night delivers on the promise of a Koji Igarashi style Castlevania game with an intellectual property that isn’t owned by Konami. You could do a few name swaps and this game would feel right in line with that series. The game itself feels like those prior games. The platforming and action are tweaked just right to rarely feel loose or cheap. It’s got responsive platforming, lots of enemies to kill, and lots of ways to kill them. It’s got the soundtrack that’s fairly close to those games and the gothic feeling and look. It’s 3D on a 2D plane done with Unreal engine, which sort of gives everything a shiny look. It comes off as a bit cheap when compared to how rich and expensive the fully 2D Symphony of the Night looked, but it’s far from bad. Stripped to its bones, the core gameplay is fun. Platforming, tons of weird enemies, and a lot of nooks and crannies to explore are what make these games enjoyable.

There’s a whole raft of non-gameplay bits that don’t have too much effect on that core loop. There are three side quest paths that simply involve getting particular items or killing particular enemies for item rewards. There are two crafting systems; one for items, another for food. Enemies drop ingredients for both systems, and they’re both of dubious return. I found that the weapons and items dropped by enemies alone were mostly sufficient to make numbers go up and get through the game. The food grants one-time permanent stat boosts, and some repeatable boosts by eating it, but I was collecting ingredients solely to complete the food side quest. Some of those ingredients are painfully rare. There’s also a ton of appearance customization options that you can only get by finding style books and delivering them to an in-game barber. I made a few changes when I found the barber the first time, didn’t make note of where he was, and never found him again. I spent the rest of the game running around with a pocket full of unused style books. This stuff exists, and it’s almost entirely optional.

Where the game stumbles is in this particular labyrinth. It just doesn’t seem to flow as neatly as previous games. As usual, progress is gated by a collection of core gameplay upgrades (like a double jump), but there were times where the way forward wasn’t clear and wasn’t gated by some kind of obvious upgrade. There was one particular obstacle that halted all progress and it was gated by finding and killing the right demon, but there were some extra steps in between. In other places, progress is simply slowed by throwing a ton of high damage, high hit point enemies in a long path to the next save point. The last third of the game really suffers from this.

The game also has the Stink of Crowdsourcing, which is stuff in the game that otherwise wouldn’t be there if it weren’t crowdsourced. The most obvious of these are paintings with the faces of Kickstarter backers, but the Kickstarter campaign sold a lot more:
Going over this list, the least noticeable were the backer designed weapons. This game is so jammed full of weapons that I couldn’t tell if I ever used one that a backer designed; they simply blend in. Backer designed enemies also didn’t really pop out at me. But the backer faces as paintings were super obvious, and the pets as enemies were rather out-of-place. Is someone really that excited to know that I killed a digital representation of their dog a dozen times so I could get its shard? The backer designed hidden rooms were almost always exceptionally tough, optional boss fights. They weren’t necessarily bad, but often out of place with their location, and gated by finding a key somewhere in the rest of the castle. This key gating is itself out of place with the style of these games; I can only think of one particular key needed in all of Symphony of the Night. I was feeling like the night janitor with my ring full of keys by the end of Bloodstained.

I put down Bloodstained for a few days in the last third of the game because I got frustrated by the labyrinth. I couldn’t tell whether I was moving in the right direction, and this style of game still uses hard save points. Dying during a long exploration run means losing all that progress, and it sucks. I had very mixed feelings about the game at this time: was it really any better than those previous Igavania’s? Is this game fun and I am bad at it or does this particular labyrinth suck? I went back and pushed through to the end, and I’m glad I did. The game ends in spectacular, classic Castlevania fashion. But it’s not quite enough to pull it up to greatness.

What I hope happens is that the team of studios that made Bloodstained: Ritual of the Night can take this momentum to make a better sequel, absent of the muddy last third and silly crowdsourced additions, and Bloodstained 2 is a great game. Today, I’m glad I’ve got one Bloodstained: Ritual of the Night but it’s a flawed experience. It’s a good game that looks cheaper than it is, has a pile of bolted-on distractions, and really loses itself in the last third.

Bonuses: +1 if you wanted That Game, you (mostly) got That Game.

Penalties: -2 weak final third, which is an awful lot of game to be not-great