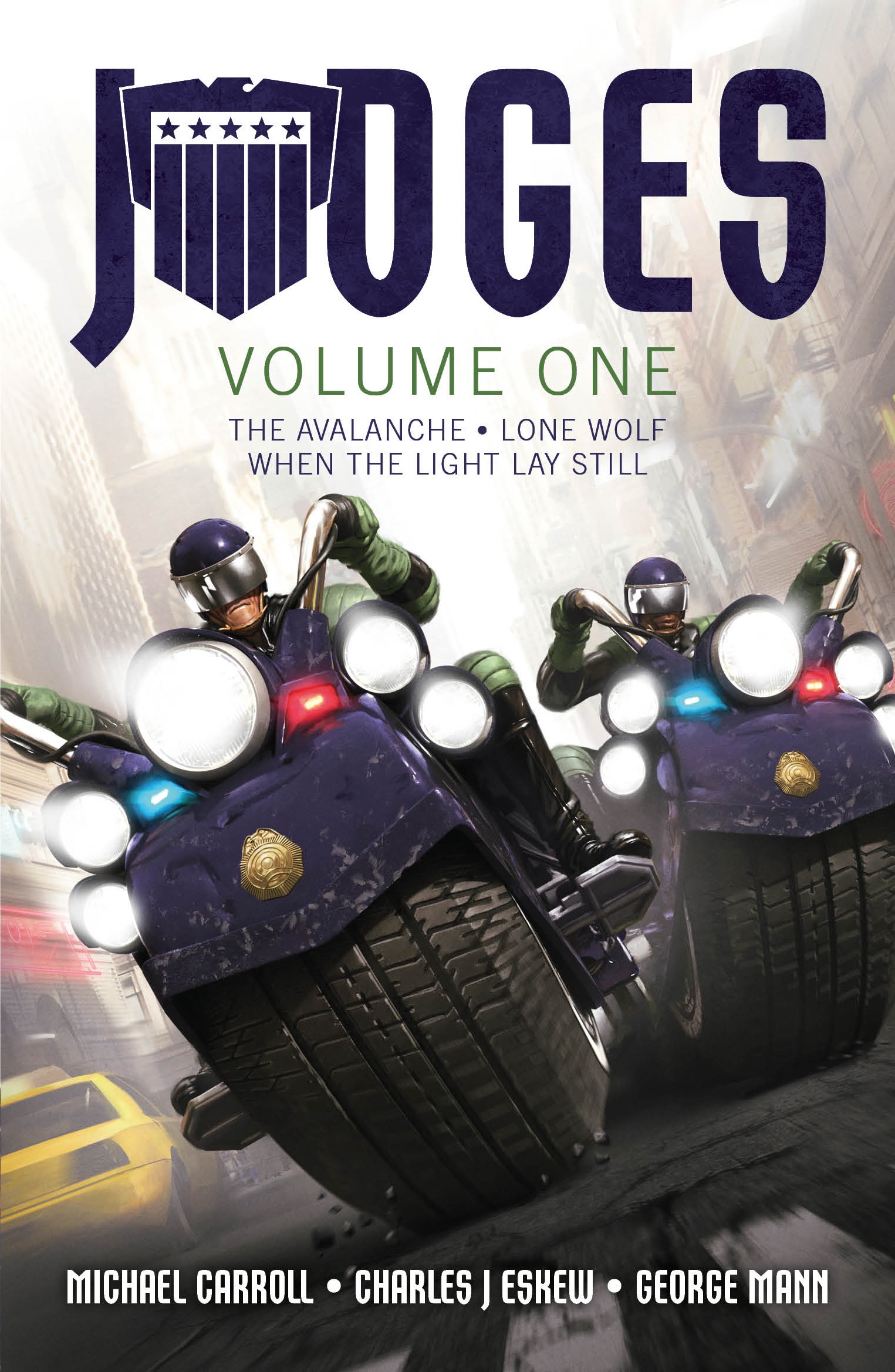 How does the world get from the police we know today to Judge Dredd? JUDGES Volume 1 brings us closer to the answer with a trio of short stories set in the Judge Dredd universe. It doesn't quite reach the bombast of that source material though.

The three stories take place in the early day of the Judges program, where newly trained judges are paired up with the normal police force between the police are eliminated entirely. Each story seemingly takes us closer to that complete replacement, with the first one starting with a group of judges walking into a police station for integration and takeover. The stories are a murder mystery, a race against the clock to find a killer's last victim, and a battle against an unusually armed gang and they're serviceable plots.

But if you're not familiar with the Judges program or the Judge Dredd world, these stories aren't going to do you a lot of favors in the way of building this world. I came into them only knowing what I learned from the Judge Dredd movie (awful) and the later Dredd (AWESOME) and JUDGES Volume 1 didn't exactly expand my knowledge of this world. It talks plenty about the Law Ranger motorcycle as an object or the judge's helmets without describing any of them. I'm told the Judges program is law now, but what brought it about or why isn't elaborated on. I guess it assumes anyone going into these stories would know this stuff from the start and that's a false assumption. Something that's pitched as the early days of the Judges should make a minimum effort to bring new readers into this world.

I also found the stories themselves to be lacking in Judge Dredd-esque action. There's no lack of action in either movie, but these stories are largely about police work. They have plenty to say about class and race, but it's all a little pedestrian. The third story in the trio, When the Light Lay Still, at least has the most fleshed out characters but it also suffers from some timeline confusion as each chapter jumps around in time. I don't want to reveal myself as an idiot but I didn't feel like I caught the whole story between these skips back and forth in time and mixed up uses of criminal aliases. Even a relationship between the main character and a love interest is a mixed bag of implied wrongings and stated actions.

While the first two stories are okay if plodding, the third is a real rollercoaster. It's both excitingly ambitious and overly complex. JUDGES Volume 1, between the okay stories and lack of world-building, is for fans of the source material only.

Bonuses: +1 Judge Poet and Judge Jones from When the Light Lay Still are written like real human characters

Penalties: -1 Next to no world-building for Dredd newbies