I am very excited to check out Captain Marvel this weekend, but was alerted to this upcoming "superhero" film that is flipping the script a little bit. It reminds me of Joe Hill's "The Cape" in some ways, and I am very intrigued.  The trailer is not for the feint of heart so consider yourself warned. 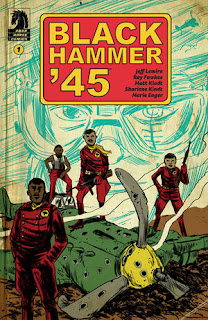 Pick of the Week:
Black Hammer '45 #1 - The incredible team of Jeff Lemire, Ray Fawkes, Matt Kindt, Sharlene Kindt and Marie Enger are bringing us all back into the Golden Age of superheroes thanks to this new title from Darkhorse.  The Black Hammer Squad spent their time making the world hell for the Nazi's. They stopped them in the air, on the ground, and in the sea. Despite some of the supernatural creations of the Nazi's, The Black Hammer Squad had little to fear.  The book opens with with members of the team, now in their 90's, getting together because of something significant about the date. We are treated to some thrilling flash-backs, but an ominous final mission seems to be at the heart of this series. This book jumps off the pages thanks to the incredible work by the Kindts and it is always easy to get on board when it comes to superheroes defeating the Nazi's. The creative team behind this series is a powerhouse and I cannot wait to see what went wrong in the final mission and what the team is getting back together for on that fateful day.

The Rest:
Paper Girls #26 - The four girls have been sent to the four corners of the "cube" and find themselves in different timelines all posing their own problems. One of the highlights for me was the Michael Jackson zing that must have been a last minute add that was particular timely. As this time-traveling sci-fi wave of nostalgia races towards its conclusion (it is ending in a double-sized issue #30) the girls appear to have one last chance to return to 1988 and save the world. I am curious if the issues will continue to feature all of the girls or if we will have one issue per girl and the second half of the finale brings it all together. Brian K. Vaughan appears to set the stage for each girl to have their own mission in their current whereabouts and an ally to assist. I fail at revisiting this series when new issues drop and I really owe it to myself to start this series over. Vaughan weaves a complex tale that spans multiple timelines with competing factions that has me scratching my head trying to understand how it all fits together.

Star Wars: Vader - Dark Visions #1 - Marvel unveiled a new mini-series that focuses on some of Vader's side quests. In this on-off, Vader finds himself on a planet that has seen better days. The people of this world live underground after their planet was ravaged by a shark looking Kaiju known as the Ender. People will scavenge the surface for food, but always have a quick route underground should the Ender awaken. Vader's Tie-Fighter crash landing on the planet has awakened the great beast and the sole individual who remained on the surface is treated to quite the epic duel. This felt pretty mindless and cheesy, but entertaining.  It is like a direct to DVD film that is worth checking out on Netflix, but you understand why it didn't make it to the big screen. I will likely check out the other issues in this series if they are as entertaining as this book was.

Batman #66 - Batman remains trapped inside his own nightmares, and his current plan of escaping isn't going to well thanks to the stubborn nature of the woman being interrogated. For some reason Batman feels if he can understand truly why Catwoman, Selina Kyle, truly loves him he will be able to escape.  This issue is an interrogation of Ms. Kyle as we walk through the complicated history the two have and try to gain a sense of their attraction to one another. I find it funny how intense the covers feels compared to the walk down memory lane Catwoman provides throughout this issue. Reading this right after Black Hammer made it feel even more retro than intended. I remain impressed with Tom King's current arc for the Dark Knight and am happy to be back on the Batman Train.  Choo-choo!