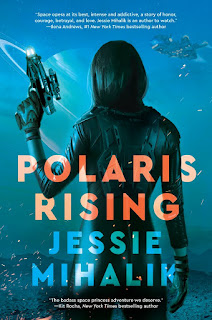 In the far distant future, Ada Von Hasenberg is a space princess on the run and has been for some time. We meet her as she has been captured, her run from her father seemingly ended. But a chance to escape, with the help of a notorious criminal that she finds herself attracted to, Ada Von Hasenberg soon discovers that there is something more important than continuing to run from her family--finding the secrets behind a special FTL ship she has just stolen. A ship that she has renamed Polaris.

The novel does revolve around the two poles of its main characters, Ada, and Loch. The novel takes pains to give the characters competence and skill, Ada’s time on the run having given her a set of skills to make her capable of taking care of herself, as well as some connections to her family. In RPG terms, she definitely has advantages from the House connection, but also entanglements and disadvantages from that connection. Disadvantages such as the primary antagonist of the book, Richard Rockhurst. Richard is not quite her fiance, as they were not officially engaged, he certainly has the idea that they were de facto engaged, and seeking to make it de jure married in the course of events.

Beyond this, Ada makes for an appealing main character. No one’s fool, and definitely not someone to be sidelined or let others take the risks (even given the fearsome Marcus Loch available to do so), Ada boldly takes risks, forges relationships and is a general force of nature whose story is appealing to follow. No damsel in distress, and yet she is a very human character who is far from perfect, either. She does sometimes bite off more than she can chew. Ada also does have a genius for connecting with other people, and Marcus and Ada do wind up getting a few unexpected allies in their journey together.

The novel does play the genre conventions of romance more than it does the conventions of science fiction. The plot and character beats fall into a relatively conventional pattern, but they are well executed and they mesh well with both the characters and the space opera universe. Readers who come to the novel for the romance plotline between Ada and Loch should be well satisfied with the storyline. Since this is a first novel set in a greater universe, I suspect this would be classified as a HFN (Happy for now) rather than strictly a HEA (Happily ever after) conclusion.

On the other side of the ledger, however, some sloppiness in the science fictional aspects of the novel.. Yes, this is a novel that is more interested in the emotional depths and journeys of the characters than the details of its FTL drive. And yes, this is not meant to be something along the lines of super net up science fiction, and for the most part it does what it sets out to do in the bounds that it is given. But, personally, I am thrown out of a story which is apparently set in a corner of the Milky Way galaxy, but the Gates that enhance FTL travel beyond its usual limits are casually mentioned as being capable of jumping millions of light years, which would be far enough to get to several other galaxies beyond our own. There is absolutely nothing else in the worldbuilding that supports a canvas that large.

Another such major science head scratcher has the characters visit a tide-locked planet, specifically visiting a city set at the light terminator, where the light is always twilight, never changing. On  a tide locked planet, this is the perfect place to stick a city, even if all of the hours of the day are going to be all the same. The climate is going to be the most moderate at such a place. However, the society of the planet sticks to a standard and universal clock of sleeping and waking. I could not believe that the city would restrict itself thusly in time, with all of its waking hours so identical, especially given that  incoming ships might come at any hour of the day anyway.

The rest of the SFnal worldbuilding, as given, is solid enough. A corporate feudal future, with three major families scheming against each other made me think of the "tripod" structure of Dune's future world. It makes for intensely personal and personalized conflicts between the major characters and their factions.

The author’s focus on character seems to be her intent, the next novel in the sequence is slated to be Aurora Blazing, featuring two characters we meet in this volume--Ada’s older sister Bianca, and Ian, head of House von Hasenberg.  I think that readers who enjoyed Polaris Rising more than I did will likely find more rich character based romance science fiction in store from the author.

Bonuses: +1 for a strong main character, excellently drawn and a solid cast of characters.

Penalties: -1 for some glaring problems with the science and technical aspects of the worldbuilding.


Nerd Coefficient: 6/10 still enjoyable, but the flaws are hard to ignore