The family and I are going on a much needed vacation next week so I am going to have to come up with a non-traditional Thursday Morning Superhero post for next week. I am attending PAX East at the end of the month, but that is for professional reasons and I am not sure I will be able to cover it properly.  I am excited to learn more about the world of esports and will hopefully sneak in one or two board games. 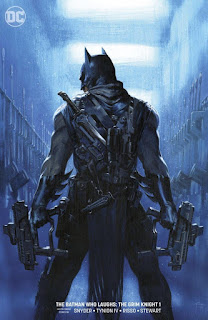 Pick of the Week:
The Batman Who Laughs: The Grim Knight #1 - This week we are introduced to the Grim Knight, a Batman from another world with a violent past. Having the same motivations as our Batman in terms of stopping crime, but differing on the methods employed to achieve similar results. It almost feels as if this Batman found the Death Note that Ryuk dropped and is using it to cleanse Gotham. The Gordon from this world is like L trying to track down who this mysterious killer is, despite the good intentions. I have fallen behind the main series, but this issue has me intrigued and motivated to return to a Scott Snyder Batman book and see what the Batman who Laughs, the one corrupted by Joker, has in store for Gotham.

The Rest:
Star Wars Age of Republic: General Grievous #1 - I learned something new about one of my favorite, if not my favorite, Star Wars villains.  George Lucas had bronchitis during the recording sessions and the sound editors thought it would be fun to include. This issue, and I'm not sure if it is a one-off or an ongoing, reads like the fusion of Indiana Jones and General Grievous. Watching him work his way through the Jedi Temple, dodging booby traps and outsmarting those who laid the path before him, was extremely satisfying and I am blown away at what an amazing job Luke Ross did capturing the mannerisms of this being and made him jump off the page. I hope this is an ongoing series as I am always thirsty to learn more about Grievous and who he was prior to the machine hybrid he became in the films.

Transformers #1 - We are treated to a new Transformers series courtesy of IDW publishing. Set in a time before the war between the Deceptions and Autobots, I was intrigued to learn more about life on Cybertron.  This is before Optimus Prime was a prime and was on pretty good speaking terms with Megatron. They are far from friends, but this issue hints at the beginning of what sparked the great war. Overall this book, despite it being a blast of nostalgia, fell a little flat. The art from Angel Hernandez and Cachet Whitman is stunning and they do an incredible job paying homage from a popular franchise.  I am not giving up on this series yet as author Brian Ruckley appears to be setting the stage for something big, but I'm not quite sold.