It's back to magical Regency England - and beyond - for the long anticipated and worthy sequel to Sorcerer to the Crown. 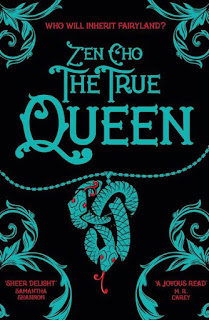 Sorcerer to the Crown was one of my favourite books of 2015, the year when I first started getting deeply into adult SFF fandom and voting for the Hugo awards, so perhaps it isn't surprising that it's so very close to my heart. Returning to this world in The True Queen feels like going to a reunion of smart, politically active, take-no-prisoners friends, where you're taken straight back into the action despite the intervening years. Most of the best characters of Sorcerer to the Crown are back - albeit more in the background - and it's lovely to see them all on top form, in a title which expands and deepens the world of the first novel in smart and satisfying ways. Although it could stand alone, there's significant spoilers for the plot of the first book here, and the thematic progression between the two means that it's best to start from the beginning: we'll wait.

Like its predecessor, Zen Cho's magical regency is one that's inextricably tied to the real history of Empire, and while irrepressible mixed-race magical prodigy Prunella Wythe (née Gentleman) might have taken up the Sorcerer Royal's staff, the undercurrents of white supremacy and misogyny still run deep in this version of the British Empire. Into this world comes Muna, a girl found on the shores of Janda Baik: a still-independent island in the middle of the Malacca straits protected by powerful witches, including returning character Mak Genggang. Muna, and her sister Sakti, have been the victims of some sort of curse which has robbed them of their memories, and while both are taken in by Mak Genggang and Sakti is tutored in witchcraft (Muna has no magic), when she starts literally disappearing it's decided that the pair might have to call on backup to figure out what's going on. That backup is, of course, best found in the form of England's scandalous Sorceress Royal, especially when an initial magic spell proves there might be an English connection to their curse itself. It's decided that this will be done by sending the pair to Prunella's newly formed academy for magiciennes, now founded in opposition to all good taste and propriety in London.

Of course, Sakti and Muna's plan goes sideways very quickly. Sakti disappears during the crossing through Fairyland and Muna is left to take her place despite her lack of magic. This quickly proves the least of her worries, as she's thrown into the ongoing dispute between the mortal world and faerie, all tied up in the loss of the Queen of Fairie's "Virtu" - a magical artifact containing a powerful spirit which was entrusted to the Threlfall family of dragons. Together with Henrietta, Prunella's former schoolmate and now teacher at the academy, Muna ends up at the forefront of the mission to untangle this drama, save her sister, and avoid bringing the wrath of the Fairy Queen down on England.

The characterisation in The True Queen is a big selling point, and there are some truly wonderful new characters to balance out the returning favourites. Muna, in particular, is a great addition: smart and resourceful when given the slightest opportunity to be, but out of her comfort zone and with a habit of deferring to her magical older sister which makes her hesitant to show her talents to her true extent. Muna's growth over the course of the novel is lovely to watch and makes the book's climactic scenes all the more tense. Sakti, her sister, is significantly less compelling, but she's absent for much of the book and it soon becomes clear that her callousness and the lack of behaviour that justifies Muna's desperation to be reunited are all part of the plan here. The growing relationship between Muna and Henrietta (yes, this book has substantial representation for same-sex relationships along with its other representation) is also great, and Henrietta's understated but clear progression from being Prunella's less talented and under-trained schoolfriend to being confident and assertive about her abilities is very nicely done. Because Henrietta and Muna are a little less outrageous than Prunella, and the latter is more in the background in this outing, I did occasionally miss her inimitable presence, but overall I felt that the balance between new and returning characters was handled very well, and I hope poor Zacharias Wythe enjoyed his break from the spotlight this time.

Where this novel really shines, however, is in balancing the humour, absurdity and melodrama of its dense plot with the more serious topics of colonialism, oppression and marginalisation which nearly all of its characters have to grapple with in one way or another. There's some truly majestic comedy in here: notable is the entire section in the Threlfall dragon estate, involving dragon-turned-affable-dandy Rollo and his formidable Aunt Georgiana Without Ruth, though the scenes with Henrietta's family trying to deal with her awful simulacrum are also right up there. These moments of fantasy fun share their tone with less savoury moments, like Muna's discovery of a racist talking portrait of a former Sorcerer Royal, but this balance is handled very carefully: it's always clear that the joke is on the racism and small-mindedness of the reactionaries, and not on the content of what they are saying. Of course, the representation of Janda Baik's culture is taken completely seriously, and occasional moments of humour from cultural misunderstandings, like Muna's assumption that Henrietta could become Zacharias' second wife to resolve her marital woes, are handled in a way that avoids portraying Muna's understanding as limited or "uncivilised". Zen Cho herself is a Malaysian living in the UK, and obviously knows what she's doing with this thread; overall, it's a masterclass in subverting the colonial assumptions that still drive our narratives of the "real" history of this period.

More so than Sorcerer to the Crown, The True Queen is interesting in that the conservative aspects of society are not represented by characters with any power to speak of: Prunella and her friends are running the show, now, whether the old boys like it or not (spoiler: they do not) and the brief moments of specific threat from reactionaries are very quickly dealt with or pushed to one side. Cho doesn't understate the effect of having a talking portrait of a racist dead man shouting at your visitors, but nor does she allow George Midsomer (it's always those pesky Midsomers!) to score any points over the characters who, after all, have things to be getting on with that aren't proving themselves to him. This balance of power stands in contrast to the portrayal of Faerie, which is powerful and threatening and alien, and which contains a large number of denizens who are quite enthusiastic about the prospect of eating humans for their magical strength.

In short, if you liked Sorcerer to the Crown - and I'm not sure why you've read this far if you didn't - then you'll almost certainly like Zen Cho's second outing in this world. The True Queen is smart, funny and sweet, regularly all at the same time, and I continue to be in awe of the author for creating such a compelling world that combines the best of cutting Regency drama with a ruthless subversion of some of the period's most unsavoury aspects (especially those which are still going strong today). I already suspect this book is going to be one of my strongest of 2019, and I'm excited for the prospect of more.

Bonuses: +1 My pretend literary best friends from 2015 are all back; +1 scathing Regency-style wit deployed against colonialism, white supremacy and difficult grandmothers alike.

Penalties: -1 My pretend best friends from 2015 could have had a couple more scenes...