This movie is hot garbage 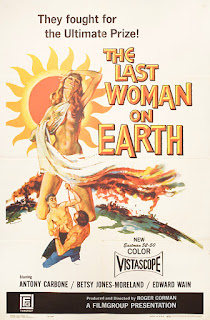 The Last Man on Earth with Vincent Price (1964) follows the lone survivor of a global plague, as he does resourceful things to survive, fight off hordes of zombie vampires, and try to work out a cure to the plague that might allow others to live. He's pretty active.

By contrast, The Last Woman on Earth is about two jerks who fight over Evelyn (get it? "Eve"?), one of the jerks' wife, while asking her to make breakfast and coffee, and she reads books about having a baby. I kept waiting for her to realize that these guys are dipshits and come into her own — and at one point she even said something along those lines — but Friends, I waited in vain. I fell asleep with five minutes left in the movie, while the two jerks were duking it out over "possession" of The Last Woman on Earth, and when I woke up, I rewound the movie to actually see the last five minutes, watching for the moment where Evelyn steps out and tells them both to go to Hell. Friends, I rewound in vain.

This movie was written by Robert Towne! Academy Award-winning writer of Chinatown! Astute readers of this site will know that I am a huge Roger Corman fan, and though this film was produced and directed by Roger, there is literally nothing I can recommend about this movie.

Bonuses: What's the mathematical equivalent of blowing a raspberry at the screen?

Penalties: -1 for there being entirely too goddamn many dudes in a movie called The Last Woman on Earth, -1 for literally everything else in the movie

Posted by Vance K — cult film reviewer and co-editor of nerds of a feather, flock together since 2012.
Posted by vkotrla at 12:00:00 PM