It might seem a bit too early to start your Halloween planning, but time is running out if you want to be cool and give out mini-comics to your trick-or-treaters!  Thanks to Halloween ComicFest, you can pre-order bundles of 25 mini comics from your local comic book store. I placed my order last week and look forward to introducing the neighborhood kids to the amazing Johnny Boo! Check out the comics you can pre-order here! 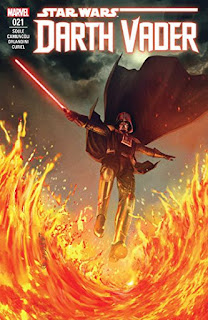 Pick of the Week:
Darth Vader #21 - We are starting to learn why Vader has selected the world of Mustafar for his prize from the Emperor. He was given Padme's royal starship as his vessel to embark to Mustafar and there is something very odd about Vader piloting such a pristine and shiny vessel. It seems that Vader has similar feelings and has an odd and surprising method of altering the shiny exterior. It seems that Vader has never felt more connected to the Force than his time on Mustafar. The location where he lost so much, including his life, has some sort of power over him and drives him forward with a blind allegiance. Marvel has really done a great job filling in the holes between the movies and providing us with valuable insights of characters that we have know since our childhood. When I think back to my first impression of Vader I thought he was simply a bad dude that could force choke someone out. We learned more about him as the movies progressed, but nothing like the nuance we get in the comics. The Clone Wars cartoon does a similar thing in regards to Anakin and I would love to see similar treatment given to other franchises.

The Rest:
Birthright #31 - It has been quite some time since I revisited this series and will admit that I will need to read the  previous few issues to properly catch up, but am instantly reminded why this series from Joshua Williamson and Andrei Bressan stood out to me when I first read it. The lore (inside joke) of Terrenos, the mages, and the world add such depth to what started as a missing child story. This week we learn more about the tragic upbringing of Mastema and the sheer power that consumes her. This issue is a nice pause in the story and Williamson promises the next few issues are insane.

Daredevil #608 - Matt and Mike Murdock have some family issues to work out. I was unaware that Matt had a twin brother, but apparently he died many years ago and was brought back through the powers of The Reader. He is already causing quite a few headaches and kidnapped Foggy, but Daredevil is conflicted faced with the prospect of killing his brother or a realistic copy of his brother. I am not entirely on board with this development, but it became more interesting with this issue and has me very intrigued given the fact that Mike just went to visit Kingpin and informed him of Matt's research into the legitimacy of the mayoral election. If only our current political environment was this entertaining. I think some good old fashioned superheros would really liven up the Mueller investigation!