Welcome to another edition of the New Books Spotlight, where each month or so we curate a selection of 6 forthcoming books we find notable, interesting, and intriguing. It gives us the opportunity to shine a brief spotlight on some stuff we're itching to get our hands on.
What are you looking forward to? Anything you want to argue with us about? Is there something we should consider spotlighting in the future? Let us know in the comments! 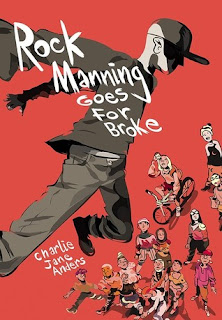 Rock Manning lives and breathes slapstick comedy, and his whole life is an elaborate tribute to the masters, like Buster Keaton, Harold Lloyd and Jackie Chan. With his best friend, Sally Hamster, he creates joyfully chaotic short movies that are full of mayhem and silliness.

But Rock and Sally are becoming famous at a time of unrest, when America's economy has collapsed and people are taking refuge in highly addictive drugs. America's youth are being drafted to take part in endless wars against imaginary enemies overseas, while at home, a fascist militia known as the Red Bandanas is rising to power. As America becomes more mired in violence and destruction, Rock Manning's zany comedy films become the escapist fun that everybody needs.

Over-the-top physical comedy and real-life brutality collide, as Rock and Sally find themselves unable to avoid getting sucked into the slow implosion of their country. The Red Bandanas want Rock Manning to star in propaganda films promoting their movement, and soon Rock and Sally are at the center of the struggle for the soul of America. The trauma and death that Rock witnesses begin to take a toll on him.

When a botched weapon test plunges the world into deeper chaos, Rock and Sally must confront once and for all the outer limits of comedy.

Why We Want It: It's a new book from Charlie Jane Anders. Right now, after how much I enjoy her short fiction and how good All the Birds in the Sky was, that's enough to get me in the door. Rock Manning Goes for Broke is an expansion of a series of stories published in John Joseph Adams' triptych of apocalyptic anthologies (The End is Nigh / Now / Has Come) and it remains a compelling and gonzo bit of storytelling. 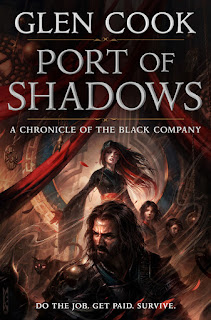 
Glen Cook, the father of Grimdark, returns to the Chronicles of the Black Company with a military fantasy adventure in Port of Shadows.

The soldiers of the Black Company don’t ask questions, they get paid. But being “The Lady’s favored” is attracting the wrong kind of attention and has put a target on their backs--and the Company’s historian, Croaker, has the biggest target of all.

The one person who was taken into The Lady’s Tower and returned unchanged has earned the special interest of the court of sorcerers known as The Ten Who Were Taken. Now, he and the company are being asked to seek the aid of their newest member, Mischievous Rain, to break a rebel army. However, Croaker doesn’t trust any of the Taken, especially not ones that look so much like The Lady and her sister… 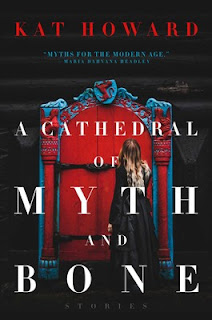 Kat Howard has already been called a “remarkable young writer” by Neil Gaiman and her “dark and enticing” (Publishers Weekly) debut novel, Roses and Rot, was beloved by critics and fans alike.

Now, you can experience her collected shorter works, including two new stories, in A Cathedral of Myth and Bone. In these stories, equally as beguiling and spellbinding as her novels, Howard expands into the enchanted territory of myths and saints, as well as an Arthurian novella set upon a college campus, “Once, Future,” which retells the story of King Arthur—through the women’s eyes.

Captivating and engrossing, and adorned in gorgeous prose, Kat Howard’s stories are a fresh and stylish take on fantasy. “Kat Howard seems to possess a magic of her own, of making characters come alive and scenery so vivid, you forget it exists only on the page” (Anton Bogomazov).

Why We Want It: I'm not familiar with Kat Howard's short fiction, but her two novels (Roses and Rot, An Unkindness of Magicians) are spectacular. Though it is a different skill set to be able to write an excellent novel and an excellent short story, I'm looking forward to checking out her shorter fiction. If they are anywhere near as good as those two novels we're in for a treat. 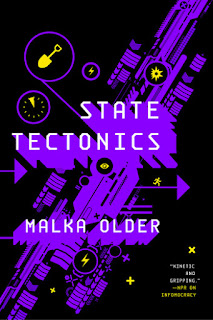 The future of democracy must evolve or die.

The last time Information held an election, a global network outage, two counts of sabotage by major world governments, and a devastating earthquake almost shook micro-democracy apart. Five years later, it's time to vote again, and the system that has ensured global peace for 25 years is more vulnerable than ever.

Unknown enemies are attacking Information's network infrastructure. Spies, former superpowers, and revolutionaries sharpen their knives in the shadows. And Information's best agents question whether the data monopoly they've served all their lives is worth saving, or whether it's time to burn the world down and start anew.


Why We Want It: State Tectonics is the third volume of the Centenal Cycle, a series of short novels dealing with a future global democracy teetering on the brink of either fully establishing itself or collapse. Older infuses the novels with a sense of hope rather than of despondent inevitability (such as we might be feeling today), but her proposed democracy is something to fight for and something that requires work, trust, and engagement (huh). Though I didn't love Null States quite as much as Infomocracy, I remain excited to see how Older will close out the series. 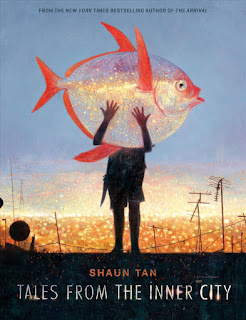 
TALES OF THE INNER CITY is an anthology of twenty-five stories, each about a particular animal — tiger, snail, hippopotamus, shark, and so on — and how we as humans might respond to their unexpected presence with in a concrete, steel, and glass landscape: the place so many of us now call home.

Some stories deal with love and kinship, the way animals can elevate out spirit; others are about cruelty and disrepect. All are intended to be thought-provoking without being moralizing or overly political, and strange enough to invite variable readings, not unlike a series of interesting dreams.The author sees this collection as both for children and adults.

Why We Want It: If Tales from the Inner City is much like Tales From Outer Suburbia, we should expect an art book that is also a collection of short stories. Tan's art is exceptional and weird and always worth seeking out. 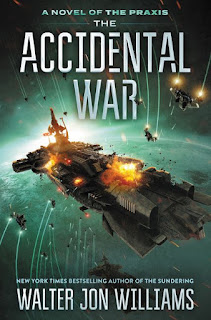 
Blending fast-paced military science fiction and space opera, the first volume in a dynamic trilogy from the New York Times bestselling author of The Praxis, set in the universe of his popular and critically acclaimed Dread Empire’s Fall series—a tale of blood, courage, adventure and battle in which the fate of an empire rests in the hands of a cadre of desperate exiles.

It’s been seven years since the end of the Naxid War. Sidelined for their unorthodox tactics by a rigid, tradition-bound military establishment, Captain Gareth Martinez and Captain the Lady Sula are stewing in exile, frustrated and impatient to exercise the effective and lethal skills they were born to use in fighting the enemy.

Yet after the ramshackle empire left by the Shaa conquerors is shaken by a series of hammer blows that threaten the foundations of the commonwealth, the result is a war that no one planned, no one expected, and no one knows how to end.

Now, Martinez, Sula, and their confederate Nikki Severin must escape the clutches of their enemies, rally the disorganized elements of the fleet, and somehow restore the fragile peace—or face annihilation at the hands of a vastly superior force

Why We Want It: Years ago I bounced off of one of Williams' standalone short novels and I've been avoiding him ever since, at least until I read his novella Impersonations (put out Tor.com Publishing, from which I read almost everything) and wanted so much more. I still have not read his Dread Empire's Fall series (beginning with The Praxis and continuing on to Impersonations), but I very much want and need to. The Accidental War is part of that larger series and the first of a new trilogy. I loved Impersonations and this might just be a perfect place to jump in to the series.