A less intense book than its predecessor, but one that leaves me very excited for where the series is going. 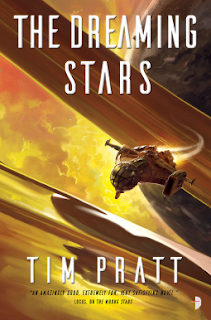 Fair warning, dear readers: this is the second book in the Axiom series, and as with all second book reviews, there may be small spoilers for the first book ahead! If a character-driven, banter-rich space opera with a great take on alien civilisations and "Big Dumb Objects" sounds like something you want to enjoy unspoiled, I suggest you stop reading now and just take my recommendation to go check out The Wrong Stars. Just promise to come back here when you're finished.

The Wrong Stars was an unexpected hit with me, taking a ton of entertaining space opera ingredients reminiscent of everything from The Expanse to Douglas Adams and blending them into something unique and entertaining. The humans of Pratt's world had made their way into the solar system when a jellyfish-like race made contact, telling grand stories of the wider galaxy and promising extraordinary technology in return for a base on Venus. The technology (and the base on Venus) materialised; the truth behind the grand stories did not, and after several encounters with different delegations, humanity branded its new sentient friends the Liars and fell into a good-natured but sceptical relationship with them. Now plugged in to a network of gates giving them access to nearly thirty different star systems, humanity happily develops in its new, larger sandbox. However, events involving Kalea "Callie" Machado and the crew of the White Raven, alongside five-hundred-year-old Elena Oh, sole surviving member of an ancient sub-light terraforming mission, and a surprisingly honest Liar named Lantern, have exposed this freedom for the lie it is. Now the crew of the White Raven are party to an ancient secret involving a dormant, all-powerful race of sadists who could wipe out humanity in a moment once we come to their notice - and, humanity being the curious-to-a-fault won't-take-no-for-an-answer race of stroppy teenagers we are, that's not so much a case of "if", but "when".

There's probably enough background in The Dreaming Stars to make it accessible to anyone who hasn't already read the first book. We are re-introduced to the Liars and the now-expanded White Raven gang, who have spent the months since the end of The Wrong Stars getting progressively more bored in close confinement with each other. The book fills us in very effectively on the rest of the backstory too - the now not-so-mysterious (but still quite mysterious) Axiom, the fate of Meditreme Station, the relationships among the main characters and their respective histories with sociopathy-inducing brain spiders, and the other events that have led to our multi-temporal heroes hanging out on their cool but limited zero-g asteroid base.

Despite its generously informative start, I hesitate to recommend jumping in here even if you're normally content to start mid-series, because what follows is an enormous amount of processing and follow-up to previous events. There's relationship conversations! And time refugee conversations! And post-traumatic event grief conversations! And some more relationship conversations! And some Fun with Simulators and Gravity! And then some more relationship conversations, and suddenly I'm wondering how we are so far through the book without any clear plan beyond "let's go see Callie's serially unfaithful ex husband". There's a method to all of this, and I'm not saying there aren't some charming moments: Callie and Elena's relationship is gorgeously well-negotiated and straightforward, and any scene with Ashok, the chief engineer, is an instant favourite of mine. However, having characters be generally quite nice and respectful to each other despite their differences (and this stretches to scenes with the unfaithful ex!) is at once highly refreshing while also limiting the hooks that conflict and tension can be built on, and with a notable exception near the start, everything in the first third of The Dreaming Stars feels like it has pretty low stakes.

Once the plot does get into gear, it's well worth the effort, although we're pushing halfway by the time we arrive on The Planet Where The Stuff in the Blurb Happens, making the action portion of The Dreaming Stars rather compressed. Despite this, the whole business with the nanobots works out pretty well. This is especially true for the solution to the finale's conundrum, which simultaneously does justice to the overpowering strength of the Axiom while also giving the humans a very believable and satisfying path to resolution. The Axiom themselves are a fantastic antagonist race, combining the unknowable menace of the Trisolarans with a terrifying aura of ominpresence that isn't diminished by the way things play out here. As soon as Axiom technology reasserts its presence, the tone of the story completely shifts, and Pratt manages to walk a very clever line between allowing his characters plot armour and letting us relax into their development knowing it's all basically going to be OK, while keeping the stakes high because it's nearly impossible to tell, until the very last minute, exactly how this could possibly work out once the Axiom are involved.

The crew of the White Raven also demonstrate how effortless and natural writing diversity into one's far-future space opera can be. Queerness is the norm, and people are open and communicative about their boundaries and methods of demonstrating affection. Notably, Callie is written as demisexual, which I don't think I've seen explicitly recognised in a book like this before, and there's also textual references to aromanticism and asexuality. Attention is also paid to neurodiversity and disability, although unless I missed something, the disabled characters all appear to be disabled through accidents rather than by birth. This isn't something I'd have picked up on a couple of weeks ago, but it's been brought to my attention by Elsa Sjunneson-Henry's excellent post-Worldcon thread on how eugenicist thinking often creeps into science fiction worldbuilding by failing to acknowledge that disabled people don't want to be cured or erased from the future by technology or whatever else. Just as neurodiverse characters like Uzoma and Sebastien have a place in the galaxy, it would be nice to see that extended to disabled characters who just are, rather than having the narrative emphasise extenuating circumstances as if disability somehow needs those to be allowed to exist.

If The Wrong Stars was the must-watch, high octane double-length pilot of your new favourite TV show, The Dreaming Stars is like taking a sample of the series middle, encompassing "the character driven talky episode" and "the really clever high-stakes detour". On its own, it's decent but not spectacular, but as part of a developing whole it represents a series that's shaping up as far more than the sum of its parts, and there's so much more to be developed: I want more Liars, more Drake and Janice, more glimpses at solar system and/or galactic politics and, please oh please, a lot more Ashok. If the author or publisher are reading this, I'd like to make clear that I would read the hell out of a 12-books-with-no-end-in-sight October Daye style Axiom series where Callie, Elena and the gang go on monster-of-the-week adventures disabling Axiom technology and saving the humans while getting slow-burning character development and the occasional game-changing plot twist. With the end of The Dreaming Stars promising at least one more adventure, I'm keeping my fingers crossed for Pratt's space opera to become a fixture of my reading calendar for the foreseeable future.

Penalties: -1 Could have kicked off the cool alien stuff a bit sooner.