Microreview [Books]: A Glimmer of Silver by Juliet Kemp and Accelerants by Lena Wilson 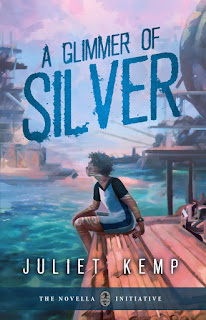 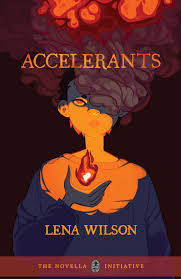 The Book Smugglers' Novella Initiative line was a highlight of my novella reading in 2017, bringing a set of diverse, different stories with some interesting romance and a more YA sensibility to some of the entries than I've seen in other fiction of this length. I've been hoping throughout this year that we'd see more from the line, and in August my waiting was rewarded with this pair - with some bonus theming around the classical elements to really seal the deal!

Both Accelerants and A Glimmer of Silver deal with people on the cusp of adulthood in their own societies, whose choices are immediately constrained by the societies they live in. Both protagonists also have superpowers: Jennery is a "communicator", one of an increasing but still tiny number on xyr world who can safely drink the water of their alien ocean, while Lucy Mi-Na is an "omni", capable of pyrokinesis in a world where superpowered people are suppressed and locked away. Despite these similarities, these are very different books in tone and outcome: where A Glimmer of Silver grounds its exploration of colonialism and other serious themes within a community that is loving, if not entirely supportive in the way Jennery wants, Accelerants is almost all sharp edges and barely concealed rage. This leads to an interesting juxtaposition between the two which means I might not have thought to directly compare them had the twin publication not felt like an invitation to do so. Certainly, you could pick up one or the other of these without "missing" anything in the book you do read -- but, in doing so, you'd be missing another novella which is well worth your time.

In A Glimmer of Silver, Jennery has grown up on a colony planet whose surface is covered by one large, sentient ocean. Upon learning this, and tentatively learning to communicate with Ocean, xyr society has developed around self-sufficient rafts and a complete taboo against eating anything that comes from the water - despite not being a single lifeform in the way we recognise, everything in Ocean is Ocean and eating people is bad. The fact that Ocean can and will destroy entire raft civilisations if provoked is also, of course, a good reason not to do anything one thinks will annoy it. All children in Jennery's world take a simple "test" when they are young to assess their capability for communicating with Ocean, with those who pass then being compulsorily trained in becoming a communicator between humans and the ocean. This involves several hours a day of floating in Ocean listening, an act which turns communicators' skin silver, but Jennery and I have a serious difference of opinion on how totally cool this would be, as all xe wants is to reach the age of 16 without hearing the voice of Ocean, at which point the rest of the communicators will have to give up on xyr and let xyr train as a musician instead.

Jennery walks a fine line between being bratty and sympathetic, which xe usually manages to stay on the right side of. I found the exceptions often stemmed from a fundamental element of the worldbuilding which I didn't pick up at the time, but found myself increasingly unsatisfied with after finishing the book. Forcing 16-year-olds into a single, all-encompassing "career" based entirely on abilities rather than interest or family situation feels very much like a problem of the 21st century, rather than a realistic crisis for a teenager on a precarious subsistence colony in space. Is it really the case that all these Communicators sit around doing nothing except be Communicators and live in their own bubble, with no time at all for any sort of other community-based activity? However, if you simply accept this one-person-one-career premise - as well as Jennery's occasional overuse of the word "stuff" (sorry, I am apparently my own grandfather) - you'll be rewarded with a very well-crafted quest of self-discovery and alien communication, when (of course!) Jennery hears Ocean at the last possible moment, telling xyr something xe can't ignore, taking xyr to the heart of a rebel settlement which threatens the balance on which humanity depends.

So, if A Glimmer of Silver is the warm, floaty novella with hidden depths, Accelerants is more like walking into a furnace. The opening drops us in one of the most harrowing moments of Lucy's life, and by the end, the catalogue of abuse and neglect and marginalisation verged on overwhelming for me. In the world of Accelerants, people with superhero powers are an open secret: known to exist, but highly controlled and effectively sent to government camps and locked away if discovered. Having burned down her house and apparently killed her mother when her powers first manifested aged 6, Lucy's story alternates between her present circumstances in one of these camps, and flashbacks to her past where she attempts to find her way as a queer, half-Korean teenager with severe anxiety around flame and a mountain of suppressed trauma. Because of this structure, we already know how the flashes of happiness in the past are going to turn out, a fact which becomes all the more heartbreaking because it's impossible not to root for the beautiful, supportive f/f romance in these sections. Lucy does manages to find support in her present too, in a relationship with a fellow inmate that has its own moments of loving care in the brutality that is the prison camp - whose "treatment" for omnis is a complete distortion of exposure therapy conducted by relentlessly sadistic prison staff.

Accelerants also does a wonderful (and, according to the "Inspirations and Influences" essay by Wilson, entirely intentional) job of confronting the "superpowers as marginalisation" trope by addressing the intersectionality between Lucy's identities. Although it's her pyromancy that gets her locked up, Lucy's terrible relationship with her father is clearly just as much a function of her race and his suspicions about her sexuality, and the latter in particular also shapes her experiences upon being locked up. One issue with telling this story at novella length is that there isn't space to directly experience the prejudices of Lucy's father while maintaining the effect of his menacing, silent presence throughout - but the effect of that presence is so well-realised that I can't fault the choice that was made here. I read Accelerants in one sitting, feeling increasingly sick and unhappy for Lucy as her story progressed: not, precisely, an enjoyable reading experience, but certainly not one that I'm going to forget in a hurry.

Ultimately, both Jennery and Lucy end their stories by coming to terms with themselves and asserting control over the positions their worlds have put them in. Lucy's climax, telegraphed from the start is a vicious yet not undeserved act of reclaimed identity; for Jennery, a more conciliatory but complex outcome is possible, re-centring agency on the colonised Ocean and enabling reconciliation on Ocean's terms. Both novellas end having punched far above their weight in terms of politically complex worldbuilding, and both deliver consistently excellent YA stories. Accelerants is, by a whisker, the more accomplished of the two, but A Glimmer of Silver offered me a more enjoyable reading experience (not least because, as regular readers of my contributor biography may have noticed, I'm a bit biased towards water). In any case, you can't go wrong with either of these, and I'm very pleased to see that the Book Smugglers' novella line is still alive and well.

The Math
A Glimmer of Silver
Baseline Score: 7/10

Modifiers: +1 superhero narrative addressing intersectionality theory; -1 just so relentlessly hard to get through on an emotional level...

Overall
Nerd Coefficient: 8/10. A pair that are both well worth your time and attention.