I wanted to open this week's post to draw your attention to the Comics Comics #1 Kickstarter.  Featuring the talent of Patton Oswalt, Paul Scheer, Megan Koester, and other comedians, this anthology pairs elite comedic and comic talent into what will hopefully become a quarterly anthology that will highly entertaining. There are still some amazing limited pledges left that are worth checking out. 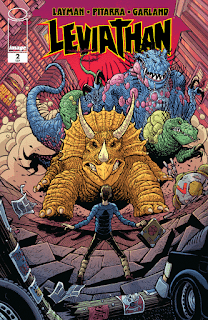 Pick of the Week:
Leviathan #2 - John Layman's newest comic is an absolute delight. The U.S. government believes that something upset an underground ecosystem of dinosaurs that had been living underground peacefully for centuries.  The plan is to drive them to the surface to showcase the power and might of our military, but there is one scientist who is convinced that the Kaiju that wrecked New York City are monsters, not dinosaurs. Ryan learns his soon to be fiance was dappling with some dark magic and likely summoned something much worse than dinosaurs that have been secretly living beneath us. Sprinkled with some fun Chew Easter eggs and Layman's somewhat vulgar sense of humor, this is quickly becoming my favorite ongoing series. With each passing moment I struggle not ordering my own Leviathan plush from Skelton Crew Studio.  I have the Poyo plush and it is one of my favorite pieces and this comic features the first Chew collectible I ever had (the pink Chog).

The Rest:
Asgardians of the Galaxy #1 - Cullen Bunn's new series is a mix of Asgardian characters that I don't know a lot about and a family battle featuring characters I do know a bit about. With an intriguing cast of characters, including Valkyrie sharing a body with Annabelle (a bookworm who wants nothing to do with any fighting) and Throg, the Frog of Thunder! I have seen various collectibles of Throg and will admit that this is the first time I have enjoyed a book with him gracing the pages. It seems that there is an armada of spaceships featuring various outcast gods associated with the Ragnarok of their respective cultures. This type of power has caught the attention of Nebula and it is up to the Asgardians of the Galaxy to save the day! Packed with over the top action and humor, consider me officially on board.

Paper Girls #24 - The girls seem closer than ever to finally returning home in Brian K. Vaughan and Cliff Chiang's time-traveling blast of nostalgia.  Erin is connects with the grandfather's mother (it is typical for this series) and learns that there may be a way back home. This is all happening as we learn that Mikey is suffering from a rare case of cancer created by time traveling (I think we will learn she has been time traveling for an extended period of ...time) and KJ gets gassed. I will admit that I am still having a hard time wrapping my head around all of the moving pieces in this story, but I don't think the grandfather is going to be happy that the girls are getting closer to home.

Star Wars #53 - Following Han's successful run evading Vader and his forces, Luke and the Rogue Squadron are able to join the fight somewhat evening the odds. It isn't quite enough, so Luke attempts to motivate Admiral Akbar to put together one last rally after his crushing defeat. Leia knows that this cover can help her infiltrate one of the Empire's ship, but it is difficult to put one past Vader. He seems to be connected to some sort of Force that makes it difficult to slip anything past him. Leia's plan appears to be no exception and we are setting the stage for an epic showdown in the next issue.