In the second half of some musings on nonhumans in speculative literature, I’m switching from the traditional anthropomorphized version—such as Redwall and Narnia—to different portrayals, particularly in Watership Down by Richard Adams and Mort(e) by Robert Repino. While they may seem unconnected, they each contain a key tension—humans.

In Watership Down, Adams attempts to move away from anthropomorphizing the rabbit main characters (though they still contain the human fantasy elements of prophecy) and instills his narrative with rabbit facts at the beginning of each chapter. Never do the rabbits hold a sword or living in an abbey. Instead, their lives are watched through a human lens, so we see their interactions in our own terms—as prophecy, friendship, love, myth. The story follows Hazel and his prophetic brother Fiver, who has a vision of their home warren’s destruction. They seek a safe place to build a new warren away from the human activity, which is of course, how their warren is destroyed—even in pastoral England. While my memory of the novel isn’t focused around the horror of human expansion (it’s very rich in worldbuilding, the main reason I love it), that’s the motivating force of the novel. Human destruction starts Fiver and Hazel on this epic journey. 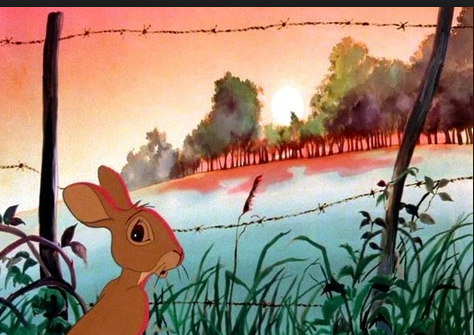 (Aside: I will point out that my only surviving memory of the 1978 cartoon version is the bulldozers destroying the warren, which FREAKIN’ TERRIFIED me.)

Now, for Mort(e). Originally, it caught my attention as the first novel in a wave of anthropomorphic books that started appearing in the early twenty-teens (more on that in a future post). While many of these books were published as literary fiction, Mort(e) walked the line between speculative and literary, enjoyed in both areas. Without giving away spoilers, basically animals gain “sentience” and also become bipedal, so they can use guns and drive cars. They overthrow humanity though some “pets” are still on the lookout for their former “owners” and some animals do ally with the humans. My description doesn’t do the series justice since it’s one of those books that sounds like a mess when you try to describe it.

These novels are on different ends of the anthropomorphic spectrum, but they differ from Redwall or another classic, The Wind in the Willows, due to the tension around how humans and nonhumans interact. One could argue that Watership Down encourages us to see the natural world differently, particularly something as common as a rabbit, by giving this nonhuman its own mythology, language, customs, culture, etc. Meanwhile, Mort(e) asks the reader to consider, what if the nonhumans could hold a gun and judge us? What would the factory farmed turkeys do? What about the abused fighting dogs? In both cases, the power of anthropomorphic novels becomes clear, but the question is, why do we need to see nonhumans as ourselves in order to respect them? As human writers continue to write about nonhumans, I’m looking forward to watching the genre develop.