The new DC event is officially here, Marvel is gearing up for its big event, Image seems to be publishing new titles every week, and the comic book fans stand to benefit!  While I plan on passing on Convergence, I will likely check in on the event every now and then.  Despite that, my wallet isn't pleased with how many great titles are out every week.  I heard good things about Masks 2 and Jupiter's Circle, but didn't have time to read them and meet my deadline.  I plan on checking those out over the weekend and remain in awe at this industry.  If you aren't reading comics then you are missing out on some truly brilliant stories. 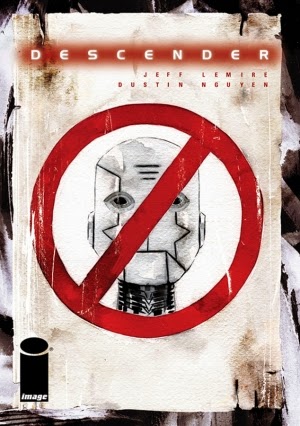 Pick of the Week:
Descender #2 - Jeff Lemire and Dustin Nguyen deliver another stunning issue after the brilliant debut of this science fiction title.  Tim-21, a companion robot that looks and thinks like a little boy, woke up 10 years after the colonies were laid to waste by mysterious Harvesters.  His robot fingerprint is an exact match to the Harvesters and there is a race to claim him.  Scrappers want to obtain his processor to sell and the government wants it to learn more about the Harvesters.   In this issue we get to witness Tim-21's creation and his assimilation with his human family.  It is beautiful and moving and extremely effective juxtaposed against his attempt to escape from the vicious scrappers.  I wasn't sure I had emotionally connected with Tim-21 until the end of the issue.  I care about the little dude and blame Mr. Lemire for that.

The Rest:
Convergence #1 - The DC Universe is getting cleaned up and it is going to happen with a good old fashioned Street Fighter-esque tournament.  The superheroes from the different universes are going to have a brawl, and the winning team's universe will be the sole survivor.  I am rooting for Captain Carrot and his Amazing Zoo crew! Seriously.  It is a real thing.

Darth Vader #4 - I continue to enjoy this series, but this has been the weakest issue yet.  It wasn't bad by any means, but felt too quick.  I expected more of a struggle as Vader returned to the devastated planet of Geonosis to steal a machine that will build him a droid army.  While the encounter was interesting, it didn't feel like anything special.  The twist at the end, however, was quite clever and will bring me back for issue #5.  I still highly recommend this series and am very pleased with the job Marvel is doing with Star Wars.

The Walking Dead #140 - I remain in awe of Robert Kirkman and his ability to bring fresh ideas to this series after 140 issues.  While the series has had its slow parts and side stories that felt like filler, each main arc has delivered.  I don't care too much about the politics Maggie is involved in, but Carl setting eyes on the camp of the survivors who wear the zombie skin and the bomb that Kirkman dropped at the end of this issue are enough to make this a must read.  I remain stunned just thinking about the possible implications of that last panel.  Wow.

Saga #27 - Finally!!  Marko is going to take ownership for what he did and reclaim his family!  It has been an emotionally difficult journey with Alana and Marko on separate trajectories.  It is unfortunate that it took a bad trip down memory lane for Marko, but it was extremely valuable to get a glimpse at his past life.  Simple, but powerful issue in a Hugo nominated series.

Birthright #6 - It has been quite some time since the last issue, but I am happy to continue with the story of Mikey and his return from another world (Terrenos).  We learn a bit more about Mikey's journey and his defeat of King Lore, but the creature who has bonded with him is making him unpredictable and creating trust issues between him and his brother.  I feel I need to learn a lot more about this story before I can judge the series as a whole and wish this issue had more answers, but trust that Joshua Williamson will deliver.  I think I need to revisit issues 1-5.