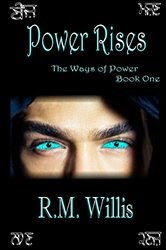 Power Rises is the first installment in the Ways of Power series by R.M. Willis, and it tells the story of Rancoth, a light magi who has the rare power of summoning demons from other realms. But Rancoth has some demons of his own, plagued with guilt over the death of his mother and feelings of abandonment towards his father. Raised under the care of the Archmage Grecrum, with all the creature comforts he could desire, Rancoth yearns to see the world and experience life for himself, so he sets out with Dorbin, his Dwalish mentor and companion, on diplomatic missions for Grecrum.

The story takes place on Earth, far into the future. It is essentially fantasy within science fiction, as this world full of different races, some with marvelous magical powers, was created through genetic engineering. I really appreciate that the author allows us to infer this on our own. There is a prologue and epilogue to border this supposition, along with the publisher description, which I should add seems to be a summary of the entire series not just this first book. Regardless, there is no unnecessary explanation of how the world was created and no stating of the obvious, which makes me happy.

In fact, this whole book made me happy. I really, really enjoyed reading it.The prose is crisp and refreshing and not at all pretentious. And while this first book in the series feels mostly like world building and set up, it is surprisingly engrossing. Willis’ imagery is beautiful and immersive, and Rancoth’s mini quests are lighthearted and entertaining. The world Willis has created here is captivating but not over complicated, which makes it a purely delightful read. I had a hard time putting it down.

I have one major complaint though, and that is the objectification of women. From rulers of state to tavern maids to childhood mentors, they are all sexual objects to our narrator. For example, every female has their appearance critiqued (usually the bum) and in one scene Rancoth is rushing to save a character because she is exotic first and dying second. Now, I’m operating under the assumption that this is intentional, since Rancoth is a strapping, twenty something young man with the one thing on his mind 99% of the time. But it got old fast, and by the end I actually started to cringe when a female character was introduced. Hopefully in the next book this won’t be so prominent.

That aside, I really enjoyed Power Rises, and I highly recommend it. It is a humble, imaginative, and immersive tale by an emerging new talent, and I look forward to reading the next book in the series.

You can check out a sample (look inside) here.

Penalties: -1 for reducing all women to sexual objects

POSTED BY: Tia   Nerds of a Feather contributor since 2014