A big congratulations to the good folk at Valiant Entertainment who inked a five-picture deal with Sony Pictures this week.   Bloodshot and Harbinger will each get two feature films and a fifth crossover film will bring the two together in grand finale.  If you haven't given the Valiant properties a read I highly suggest you check them out.  Rai and Ninjak are two of my favorite, and I am now very intrigued to check out these two series in details.   Congrats! 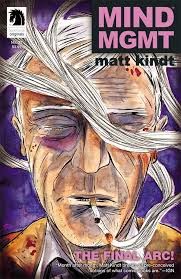 Pick of the Week:
Mind MGMT #32 - The final arc is here and I am filled with a range of emotions.  I am anxious to read the finale Matt Kindt has planned for his opus, but I don't want to leave the world of Mind Management.  Well, I don't like the management as it is evil, but the cast of characters that Kindt has assembled throughout this series is simply stunning.  I want more characters that have unique abilities like in this issue.  The power of words, the ability to use a hive mind, and the power of propaganda to name a few.   It is a stunning world that may have an ending that isn't very happy.  The Eraser seems to be one step ahead of Meru at every turn.  Just when we think Meru has a chance to recruit a former agent, we realize she was too late.  The finale is sure to be epic and I am confident that blood will be shed, but believe in Meru.  I want my daughter to be like Meru.  Maybe Zelda can dress up as Meru for Halloween?

The Rest:
Chew #48 - John Layman is truly a comic book pioneer.  For the first time in comic book history, a cybernetic horse dick joke was dedicated to a fellow creator.  I hope comic book artist Nick Pitarra is truly honored to be part of history.  Beyond the awesome dedication, Layman delivered an epic issue!  Olive Chu is awake and ready to take down the collector.  She surprisingly has teamed up with Savoy (who I still don't trust) and must first face a deadly team of Jellassassins (a deadly group of criminals who have special powers associated with gelatin based food).  Layman is gearing up for an epic finale that is sure to leave large numbers of bodies in its wake.  I fear for Tony Chu and am convinced that Layman is only ending the book soon because he can't think of enough food related powers to keep the story going.

Convergence Wonder Woman #1 - I really want to give Convergence a chance, but may have spent my last $3.99 on a DC title until this event is over.  I imagine I will cave for Batman, but the Mortal Kombat of the DC Universe does little for me.  This issue introduced Wonder Woman as a champion of the Gotham from our world.  I like this idea, but was lost as soon as the vampire world villains appeared, including vampire Joker, Catwoman and Poison Ivy.  I am sure that some are enjoying this event quite a bit, but I think I will be taking a DC break for some time.

Star Wars #4 - After the hype of the new trailer that dropped at Star Wars Celebration, it is good to return to some new material set after Episode IV.  There is a lot of soul searching taking place amongst the characters.  Leia wants to define herself as a leader of the rebellion, Luke doesn't know who the hell he is, and Vader is trying to maintain a balance between serving the Empire and gaining control of it.  I continue to be impressed with this title and feel the creators have done an excellent job remaining true to the source material.  That is no easy task and should be commended.  Oh yeah.  A character named Boba Fett showed up.