Guys, are you sure?

The smart money — and by that I mean the opinion expressed by most people who commented on this tournament on- and offline — said that this tournament was a race to second, because after early rounds it seemed clear that The Empire Strikes Back was a lock for the number one spot. But, as they say in actual sports, that's why they play the games.

Ladies and gentlemen, I give you the Greatest Sci-Fi Movie of All Time, as decided by the Nerds of a Feather readers who participated in this tournament (and proud we are of all of them): 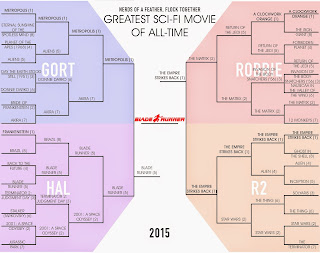 I wonder what it was. See, Star Wars has an unequaled fan base. But many readers, guests, and commentators on this blog seem to believe that the Star Wars films aren't, in fact, science fiction. More like "fantasy in space." Could be. As our own English Scribbler said to me, maybe the purists won. But one thing is damn certain, we all win when we watch Roy Batty's final scene.

Posted by Vance K — who wishes he could see anything off the shoulder of Orion.
Posted by vkotrla at 12:00:00 AM