Magic and whimsy meet deadly and disturbing in this unique collection 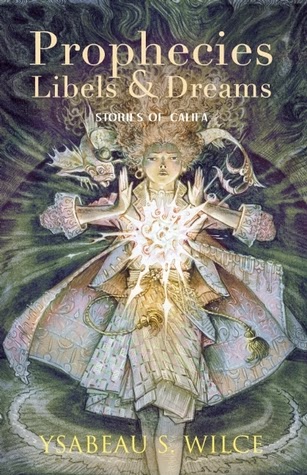 This collection strikes me as interesting first and foremost because of its structure, that of a series of stories set in the same fantasy world. A bit like how old Gothic stories would be framed as "found" manuscripts or journals, these stories are framed as having been compiled by a historian to create something of a historical text. And the history is of Califa, or at least heavily centers on the city and, most specifically, on a few key personages. Each story is accompanied by an afterword, which offers commentary from the historian on the various tales. It's entertaining and a clever way of placing the stories in context. While the structure of the collection is interesting and engaging, though, I found the execution a bit more of a mixed bag.

The collection is not especially long, and a mix of fairly short stories and longer ones. The short stories jump around a bit, and are placed at the beginning and end of the collection. The two stories that open are short and do a nice job of building the scene, introducing a few key ideas and just setting up the feel of the setting, of Califa, a mix of gold-rush America with more Victorian manners and a unique magic system that adds an edge of darkness and wild possibility. The stories at the end of the collection, similarly, offer a few amusing diversions, including the last story which is actually set on Earth after the Civil War and is brought into collection as the historian explains that it is a fantasy based on quasi-historical places and events in Califa. Again, it's a clever way of presenting the stories, in fitting them all into a more unified whole.

The largest stories appear in the middle part of the collection, and center around the character of Hardhands as he deals with magic, betrayal, betrothal, and trying to forge his own future. I liked the character of Hardhands, his mix of brutality and privilege and near-innocence, but I felt these stories left me wanting more. They fit together reasonably well, and together might be considered a mosiac novel of sorts, a way of telling his life in episodes. If they are episodes, though, I felt that it was a bit distracting the parts of his story that were left out. Which brings me to my largest complaint of this collection, which will also likely be one of its greatest strengths to people more familiar with the setting: these stories are companions to a series of novels set in Califa. And as such there is no real sense of closure to the story of Hardhands. He overcomes obstacles, but they feel more like asides to something else, to a larger narrative that is here untold.

And I, personally, cannot speak to how well the stories fit into the larger tapestry that is built in the novels set in Califa because I have not read them. But as stand-alone stories I was left a bit wanting. Not because the prose is ineffective. The stories are always entertaining, always light and ridiculous with a vein of rather disturbing horror running through. The setting is dark, a twisted reflection of our own past, and the stories do an excellent job of capturing a mood and tone that evokes a fantastical past. But that the stories, while entertaining on their own, seemed to be a bit lacking in an overall direction and meta-narrative, for all that they are presented as a historical text. Or, perhaps, I got the feeling that there was something going on, but that I was missing it. That there was a layer of context that I, having not read the novels, was missing. For fans of the novels, I assume that having that added layer would make the stories pop more, would make the project as a whole pop more. For me, and perhaps for other readers for whom this is their introduction to Califa, the experience might leave a little bit to be desired.

At least for the stories that focus on Hardhands and Tiny Doom. While interesting and fun and dark and hilarious at times, the stories (and even the afterwords) hint at events and characters that I just wasn't aware of. As world-building it did make me interested in knowing more, but it was also frustrating because I kept feeling that I was missing something, that I was walking in during the middle of things and kept wondering what had added importance and what didn't. The shorter stories, and especially "Hand in Glove," I found positively delightful, but I will admit that for me the longer stories dragged a bit, and while fun and full of action, left me a bit confused.

And, in the end, that confusion pushed me out from enjoying the collection as much as I could. Not that I wouldn't recommend it, especially for fans of the series, but for people who are new I'm not sure I would suggest starting with these stories. They are fun, and they show a great deal of promise, but they don't come together as much as I would have wanted. Though the presentation is clever and rather engaging, I didn't feel that it really worked to pull me more into the stories or provide an added level of meaning to explore. At least not without having a better understand of the setting, of Califa, that the novels might provide.

Bonuses: +1 for the historical text approach to framing the collection

Negatives: -1 for not quite pulling it all together

Nerd Coefficient: 6/10 "Enjoyable, but the flaws are difficult to ignore"