As much as we love each other here at Nerds of a Feather, we sometimes do have disagreements. One disagreement that The G and I cannot seem to iron out revolves around our respective views of Daniel Abraham's new epic fantasy series, The Dagger and the Coin. The G wrote excellent reviews of Book 1, The Dragon's Path (which he gave an 8/10) and Book 2, The King's Blood (which he gave a 6/10). My opinion is actually the inverse of his. Whatever the case, I see no reason to reinvent the wheel, which The G has done quite well, so instead of providing a traditional review of both books, I will simply state what I feel were the strengths and weaknesses of each installment of the series. This "Second Opinion" is my contribution to our Nerds of a Feather Anniversary Celebration!

I literally flew through the book, gobbling it up in a few days. It is fantastically well written for a fantasy series, featuring crisp and clear prose. Further, Abraham deals with the issue of morality in a unique and inventive way. Geder, for instance, is pure of heart but evil in action. But Abraham grapples with morality in even more sophisticated a manner through the use of Dawson, a blue-blood (noble) in the truest sense of the term. Dawson fights to uphold the nobility; he fights for tradition, for what he thinks is right, true, and just. But in the process, he emerges as something of an anti-hero. I found myself rooting for his victory and rejoicing in his good fight while reviling his cause. What is morality, Abraham suggests, when what is moral and good to one is truly repulsive to another?

Of course, The Dragon's Path makes no qualms about the immorality of atrocity. Abraham includes a number of spine-chilling scenes, acts of such emotional power that we rarely find in works of epic fantasy. One of the most horrible atrocities I have encountered occurs in this novel. But the presentation of this atrocity in a lighthearted manner, without celebrating its grit, its blood, or gore, make it all the more disturbing.

Nonetheless, I had a number of quibbles with The Dragon's Path. As I see it, the book had four main weaknesses. First, the world building is a bit splotchy. Abraham introduces the idea of 13 races, but fails to flesh this idea out throughout the course of the novel. Perhaps it would have been more effective, as The G mentions in his review, had Abraham introduced the various slave races in a more gradual and natural way. The way he has it set up now, I am not sure that the 13 races actually adds anything to this series.

Second, Abraham only hints at a broader narrative without really beginning to engage in it. Failing to introduce the main story arc, even in a limited way, detracts from the power of the story. Why continue reading the series when we have little idea where it is going?

The answer, of course, should have been the characters. Had Abraham created a character-driven fantasy with protagonists and antagonists about whom the reader truly cares, then that would overshadow the lack of a main story arc. Sadly, Abraham fails to do so. (A perfect example of a writer who does this well is Steven Erikson in The Malazan Book of the Fallen. One has little clue of the overall story line even after the first four or five books. But Erikson creates fantastic characters, an inspiring formula, and brilliant world building that keeps the reader engaged nonetheless). Although I enjoyed watching Cithrin grow up and seeing Marcus grow increasingly more protective over her, I never really began to care for the main characters.

Finally, the novel only hinted at tenuous connections between the characters. While I understood that they would play more important and interconnected roles as the series progressed, I found myself wondering why each of the four main viewpoints did not connect to the others in a more intuitive way.

In the end, I did enjoy The Dragon's Path. The writing is clear and engaging, and Abraham deals with morality and atrocity in a more engrossing way than most other epic fantasies I have read. But the problems in its story arc and its characters do not warrant the fantastic score The G gave.

Jemmy's Second Opinion: 6/10 "Still enjoyable, but the flaws are hard to ignore" 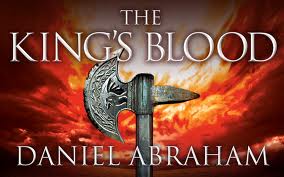 
I also find myself disagreeing slightly with The G's assessment of The King's Blood. In this book, Abraham presents is a more complete package than he did with the first installment of the series. The King's Blood is well written and engaging; I zipped through it, finishing the book it in even less time than I finished the first volume. To me, Abraham transformed most of the weaknesses of The Dragon's Path into strengths in The King's Blood (except the 13 races, which still seems to add little to the broader story).

First, and most importantly, I began to care about the characters. Cithrin truly comes into her own as a bank manager and as a political and economic mind. And although not all her decisions feel natural or make sense (her relationship with and protection of Geder, for instance--in this, I do agree with The G's criticisms), I remained invested enough in the character for my suspension of disbelief mechanism to kick in. After all, Cithrin is a fantastic character: highly intelligent, ambitious, fearless, and eminently practical. Marcus becomes more sympathetic and complex, as he becomes increasingly torn between his duties as Cithrin's head of security and his growing fatherly affections for her. Geder, always repulsive, continues to portray the child-like quality of evil. Child-like purity, after all, is composed of equal parts good and evil, parts which at times seem to be at war within Geder's personality. Dawson, ever the challenger for his particular sense of justice, fights the good fight, engaging in a battle he knows he is unlikely to win. And Clara, Dawson's wife, finds herself pushed into a decision that she otherwise would not have even thought up. It is the characters that make the story, and The King's Blood does a much better job in getting the reader invested in its characters, whether we like them or not.

Equally importantly, the connections between the protagonists and antagonists become clear as a sunny day. The advent of the spider priests (under Geder's protection), Marcus's personal quest, Master Kit's existence, Cithrin's attempts to establish herself in the bank, and Dawson's battle to save the kingdom point to where Abraham is headed with the series, and kept me much more engaged than did the first volume of the series.

One of The G's biggest criticisms of The King's Blood is the fact that Geder was chosen as Lord Regent instead of Dawson. This, The G argues, makes no sense. But I do not feel that this should be seen as a flaw in The King's Blood. Instead, it is a flaw of the first book of the series, The Dragon's Path. Geder Palliako was the obvious choice or Lord Regent once he became the protector and adoptive father of the crown prince. So while I agree with The G that Dawson was the obvious first choice for Lord Regent, I also recognize that his fate was sealed after Geder became the crown prince's gallant protector. Instead of being a problem with The King's Blood, let's add it to the [growing] list of problems with The Dragon's Path.

The King's Blood, in the end, does much to invigorate the series (which has a lackluster beginning). It is well paced, interesting, and ties the otherwise disparate story lines into an organic whole. While there are, as The G points out, some forehead slapping moments, they are offset by wonderful character development and a fast-paced character-driven story. Whereas I am hesitant to give an emphatic recommendation to The Dragon's Path, The King's Blood gets two thumbs up.

Jemmy's Second Opinion: 8/10 "Well worth your time and attention"

[Read about our scoring process here, and learn why we say "no" to grade inflation.]
Posted by Jemmy at 12:00:00 AM