Microreview [film]: Lady in the Lake 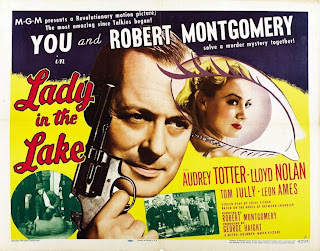 Lady in the Lake is the kind of movie that receives mention and has some clips featured routinely in documentaries about film noir because it's a movie with a capital-G Gimmick. For this Raymond Chandler adaptation, the entire movie was shot in "first person," meaning that the camera stands in for detective Philip Marlowe himself. Other actors address their conversations directly to the camera, if somebody punches Marlowe, or kisses him, they punch or kiss the camera, and if Marlowe looks in the mirror, we see...well, not the camera, but actor Robert Montgomery, who also directed.

This whole project was Montgomery's brainchild, and nobody but him seems to have cared too much for the idea. Raymond Chandler never liked the idea (and likely didn't care for MGM using somebody else's adaptation of the book, after Chandler had already adapted it himself), the studio didn't like it and made Montgomery shoot some interstitial segments where he addresses the camera directly, and audiences didn't like it either, since they paid their two bits to see Robert Montgomery in a movie, not listen to him in a movie. But it's certainly an ambitious directorial debut, and Robert Montgomery got what he wanted out of it, which was an opportunity to move from in front of the camera to behind it, where he would spend most of the rest of his career.

But how's the movie itself? More or less mediocre in every way. The plot is your standard Chandler-esque maze of lies and double-crosses, this time concerning a web of mistresses of different men, powerful each in his own way, and each of whose trails cross somehow in the town of Little Fawn Lake (think Big Bear, for those of you familiar with Los Angeles). The movie differs considerably from its source material, focusing most of its energy on the relationship between Marlowe and his client Adrianne Fromsett, whose role was expanded for the movie. It lacks Chandler's edge and lyricism, and what results is a shallow but enjoyable detective story with some unique camera work.

Penalties: -1 for noir stalwart Audrey Totter's repeated and cartoonish expressions of shock, anger, and/or disgust, all directed right at the camera lens; -1 for the cop-out interstitials that break into the first-person POV conceit arbitrarily

Bonuses: +1 for its place in the Movie Gimmicks Hall of Fame; +1 for Robert Montgomery being the father of Elizabeth, my favorite TV witch ever

Nerd Coefficient: 6/10. Still enjoyable, but the flaws are hard to ignore.