I know there are some aluminum hat wearers out there that have been anxiously awaiting a nightmarish, Orwellian  future where we are monitored at all times by huge, evil corporations bent on world domination, just so you can say, "I told you so." Well, guess what? I've got a surprise for you! The next Xbox is going to never be disconnected from the Internet. Not only will it shut down if it isn't plugged into the net for three minutes, but they're more than doubling the cost of the privilege of subscribing to Xbox Live to $10/month. First of all, let me place the caveat here at the beginning saying this information comes from another blogger. We aren't 60 Minutes or Nightline when it comes to investigative journalism. That said, I feel fairly comfortable posting considering the story has re-run on Yahoo.com and IGN (Read more, I'm not making this up: http://www.ign.com/articles/2013/04/25/next-xbox-functionality-pricing-reportedly-outed).

It's moves like this that make me wonder, are they trying to scare people away? For one thing, every time your Internet goes down, and with some connections this is more of an issue than others, your Xbox is going out, too. Not only is that doubly annoying, it makes no sense.

I assume this is to cut down on people buying used games. Why not just do what Mass Effect 3 and many games before it have done? Have a one-time-use code that must be purchased a second time if the game is to be played on another console. It makes me sick to even say that because personally, I believe you ought to be able to buy and sell legal items pretty much as often as you'd like. However, it's the lesser of two evils. At least with the code you can buy the game used and play it at your leisure, not worried that you're being watched at all times by some sort of sick super-villain. The blogger that broke the news said the 'always on' rumor, "Isn't as Draconian as many seem to believe." That's funny, I was thinking that was the perfect word for it. While I don't believe Bill Gates sits in a room with thousands of HD monitors showing every last Kinect feed in the world, I don't really want him to have that capability. You won't be able to take your Xbox any place that doesn't have an Internet connection. In some hotels, wifi can cost as much as $20/night. What about the Xbox hooked up in the car to keep the kids entertained in cross country road trips? I guess that one is ground they're giving completely to Sony and Nintendo, although the Wii isn't really back seat friendly. Those controllers make fantastic sister or brother assault aids in a 30-hour car ride, as well.

are you trying to make me angry?

Don't make me angry. You wouldn't like me when I'm angry. I fail to see the justification and motivation for this drastic measure. Are they really losing that much money in used games? I keep all my games because I figure I'm not being played like a chump for six bucks. It's worth the slightest possibility to me that I might play something again that I'll keep it just out of spite over not giving into Gamestop's racketeering. I have close to six grand in video games sitting on the shelf next to my t.v. Well, sadly they aren't worth that now. Game discs do not, as a general rule, appreciate in value with time like fine wine or artwork. I did the same thing with lots of college textbooks. I paid $129 for it and you're going to try to give me $12? I don't think so! I'm keeping it. I'll probably never crack it again, but it's worth it knowing I wasn't played for a fool by a system set up to con students, the vast majority of whom aren't the richest demographic to begin with. 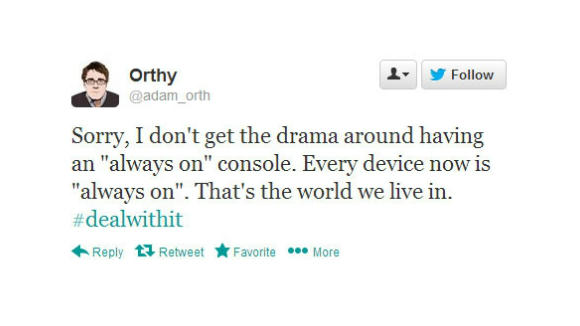 I'm a bit reactionary and I currently feel like "dealing with it" by picking up a Sony this year. I can get it earlier than November, so that's one plus for the PS4. I may calm down by then and realize I can't live without my Xbox, but I also might not want Bill Gates watching me sit on my couch all day. That's exciting stuff, I know, but that's exactly why I don't want to give it away for free! I should be charging Billy Boy for that privilege. Microsoft Executive Adam Orth resigned shortly after the less-than-sympathetic Tweet above. Nevertheless, it appears Microsoft is going ahead with their plans. Screwing over loyal customers is fine, so long as you don't tell them about it on social media. That's crossing the line, man. Low blow. Dirty pool. Unacceptable. I suggest buying a roll of this, so at least you can give Microsoft the same treatment they're giving you. 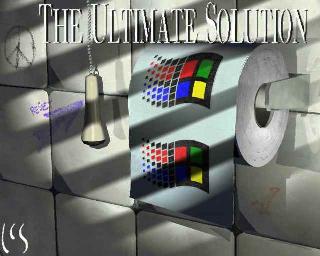