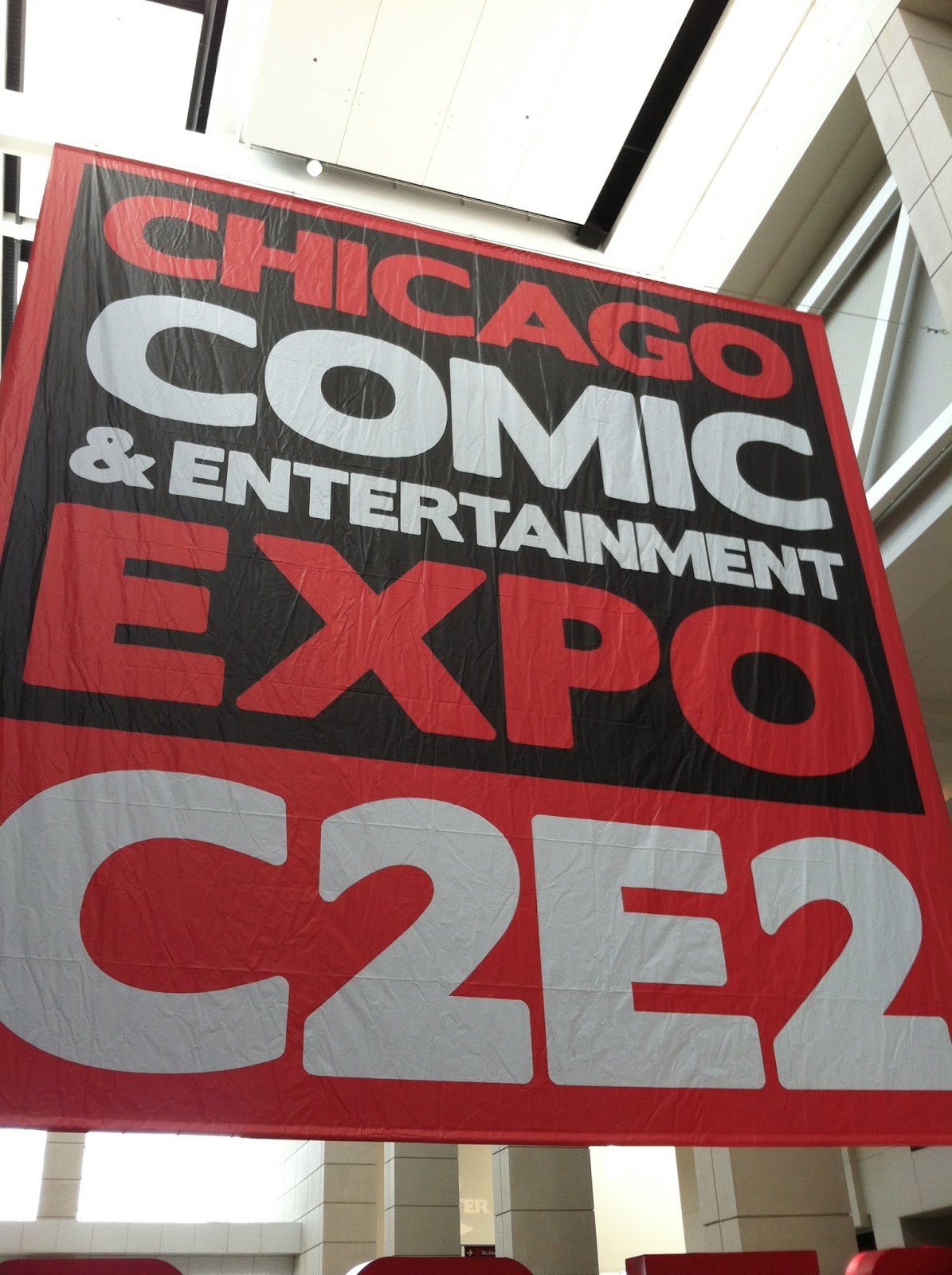 On Saturday I had the privilege of attending day 2 of the Chicago Comic and Entertainment Expo (C2E2) and must admit that I had a great time.  In recent years I have started hitting the convention scene up a decent amount, from the nerd mecha that is San Diego Comic Con to the photo-op, autograph heavy Wizard World Conventions that travel from city to city.  PAX and Toy Fair are on my bucket list, but thanks to a long day of driving I was able to cross C2E2 off the list, which despite being in its 3rd year, has already developed a reputation as a great con.  Click here for some great pics courtesy of the Chicago Tribune.

My journey began with a 4:30am wake-up call in southern Indiana, a large cup of coffee, and a five hour drive to McCormick Place.  Check in was quick and the friendly staff had me all set up to join the que to hit the show floor! 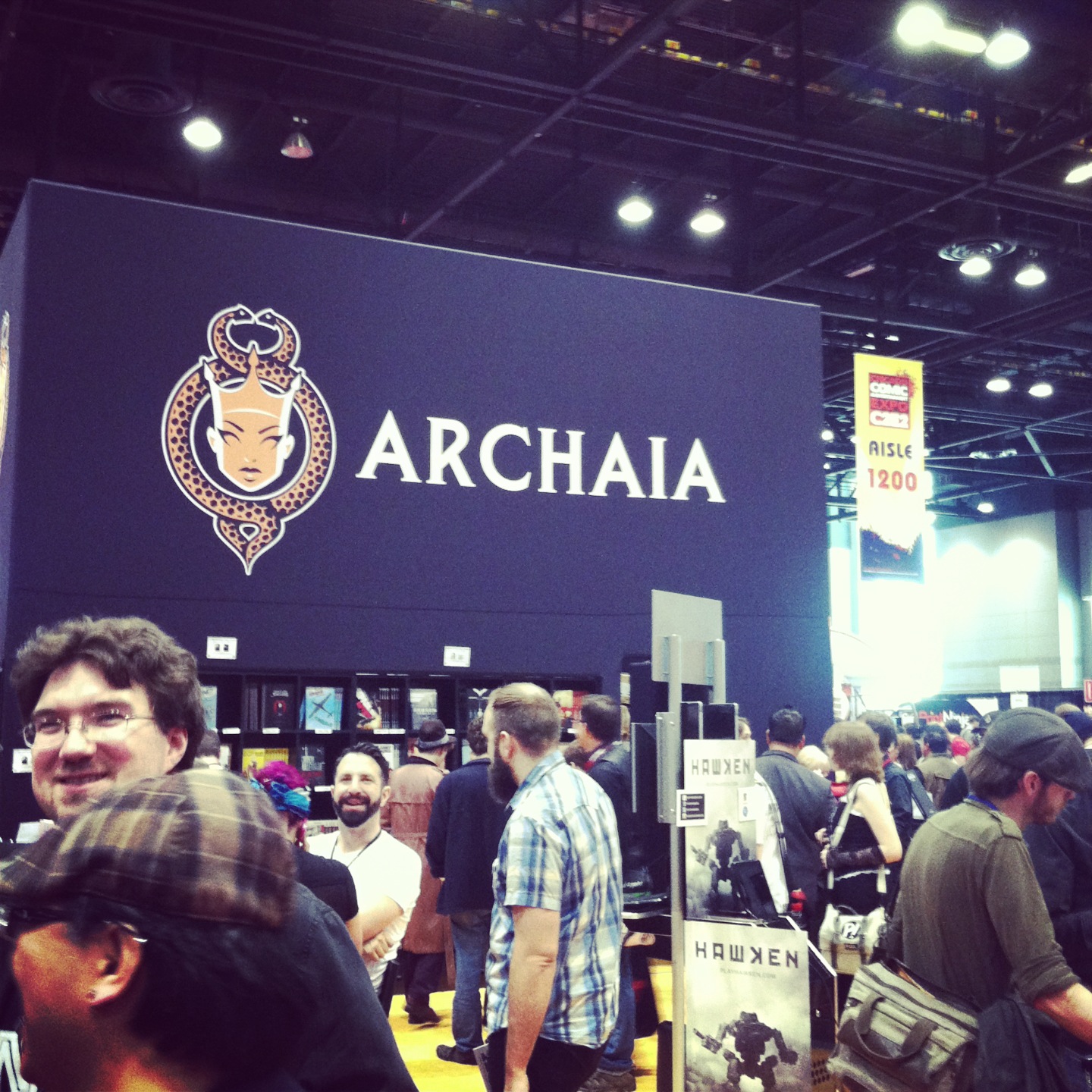 Similar to other cons, C2E2 featured an assortment of comic publishers (Marvel, Archaia, Top Shelf, Dark Horse), merchandise (We Love Fine Tees, Threadless, The Yetee), local comic book store booths, and artisan wares.  One thing that really impressed me was C2E2's inclusion of "The Block".  The Block was a central hub where you could purchase hand made action figures, screen-printed t-shirts, art prints, and other homemade items.  It really allowed artists who are not nationally known to showcase their goods and there were a lot of great items.

C2E2 also offered up a "Power Up" scavenger hunt which had con
goers, including myself, deciphering clues to the location of 16 QR codes placed around the convention.  Upon scanning all 16 you were rewarded with the secret phrase which you whispered to the nice folks at the information for a swag bag.

Visiting the various booth resulted in a decent showing of swag (not to the level of SDCC) and the ability to interact with creators in a more intimate setting than SDCC.  At Marvel I was able to see Rick Remender and Brian Posehn, and utilized Twitter to interact with Sean Williams and pick up my Artful Daggers art card!  With no line I was able to get an autographed The Massive poster from Brian Wood and got Vadar's Little Princess and Darth Vadar and Son autographed by Jeffrey Brown at the Top Shelf booth.

My biggest disappointment for the day was missing Patton Oswalt, but had an absolute blast.  I also wish I was able to spend some time at Artist Alley as there were numerous creators I would have love to meet, but it was quite busy and my wallet was quite empty.

The top panel I attended was the Age of Ultron.  I have really enjoyed this series and it was fun to get insight from the creative team at Marvel at how the various parties involved worked through certain issues.  I was able to get into all of the panels I attempted without any extensive waiting, and the fans asked intelligent questions and the creators seemed very happy to be there.

My overall impression of C2E2 is that if you are a fan of comics then you will have a good time.  I never felt overwhelmed with the crowds ala SDCC and the creators seemed to be more accessible and looked like they were actually having a good time signing autographs, posing for pictures, and interacting with fans.  As much as I love SDCC, it seems that some individuals (often myself) are just exhausted from the busy schedule.  C2E2 managed to feel relaxed and like you were part of something big at the same time.  I will definitely make a trip to the Windy City in 2014, hopefully stay for the full weekend, and bring a stack of books to get signed as I wish I did this year.  Thanks C2E2 and see you next year!