Do you want to know why Superman Returns was so underwhelming whereas The Dark Knight rocked so hard?  (I'll bet Bryan Singer does!)  I'm convinced it's because Superman is such a good good guy. Sure, that sort of squeaky clean image probably appealed to older generations, people under the shadow of the Cold War and whatnot.  But characters like Superman have little resonance with today's youth, who prefer that their heroes have a healthy streak of bad in them.
Why is that? The truth is good guys have great difficulty undergoing on-screen character development, since after all how can a morally pure character experience a real dilemma, or break his unwavering commitment to right conduct?  That's probably why, in the Christopher Reeve superman movies, they had to invent the notion of him wrestling with becoming human in Superman 2.  But that didn't work out either, because if there's one thing even less interesting than a totally good superhero, it's a totally good person who's also totally ordinary.
This brings us to 2011's Attack the Block, about which The G wrote a scathing review.  Am I here to pick apart every claim The G makes and show where he's wrong?  Not at all.  In fact, I agree with almost all his statements about the film—namely, that it's trying too hard to be cool/edgy, that the supernatural threat the gang of street kids faces is kind of lame, and most importantly, that none of the characters is sympathetic in any straightforward sense.  Where we differ is in our reactions to this final fact: he found it a huge obstacle to enjoying the film, whereas I thought it was the movie's strongest feature.
The main characters are definitely not good guys.  They're crude thugs; the audience can't possibly feel that they have right on their side, which certainly makes rooting for them difficult. 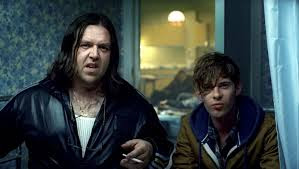 But therein lies the movie's special challenge to the viewer: what if, when the bad guys come, the only ones who humanity can scrounge up to face them are a bunch of lowlife punks? Isn't the "punk versus alien" idea less well-traveled than the White Knight versus Total Evil paradigm? Instead of a beacon of justice, we get a loser and his lame crew, teetering on the edge of becoming straight-up criminals, nudged back from said edge only by the bizarre circumstances. They might be almost cartoonish caricatures of British wannabe American tough guys, but somehow listening to their almost unintelligibly slang-ridden bouts of braggadocio felt more fun than yet another "these aliens picked on the wrooooong American!" trope.
Speaking of which, it's wonderful to have a movie (that doesn't totally suck, like the recent rash of terrible Russian sci fi movies about flying cars and sentient ball lightning and who knows what) in the all-too-familiar alien invasion sub-genre which isn't set in, or about, America (though minus one for, culturally, becoming so like the monster they are trying to overcome). That said, this movie isn't on the same level as District 9 or 28 Days Later, but I'd happily re-watch Attack the Block over quite a long list of alien/disaster movies.
And if all else fails and you still find yourself wishing the film would end, take heart: it's short! The soundtrack helps the movie maintain its zippy pace, and the producers were smart enough to get the film down to just 82 minutes not including credits, which means we don't quite have time to lose interest in the characters or the situation.  Plus Nick Frost is at his dazed best!
All in all, Attack the Block doesn't really live up to the critical acclaim it's received, but the makers can always chuckle to themselves that, with a mere 1/16 of the budget, they succeeded where Bryan Singer's lackluster Superman totally failed!

Penalties: -1 for the trying too hard to be cool/American thing, -1 for lame aliens

[See an explanation of our non-inflated scores here]
Posted by Zhaoyun at 12:01:00 AM