Scalzi, The Human Division Episode 4: A Voice in the Wilderness 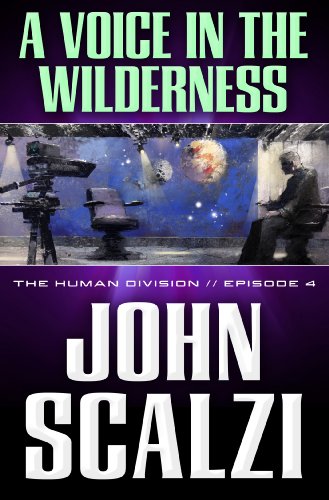 Yes, that's right: we won't be following Wilson, Schmidt and Abumwe this week. Rather, we take a detour to Earth and get a peek into the life of one Albert Birnbaum, an AM radio-style shock jock (think Rush Limbaugh meets Howard Stern) whose career is currently in free fall. That is, until he's approached by a suited gentleman with a proposition from a (not-at-all obvious) mystery client. He asks Birnbaum to advocate for a cause, and promises that if he does, all his problems will magically disappear. But at what cost?

All the usual  praise for Scalzi's writing applies here again: the snappy dialogue, the economical but effective descriptive prose, the engaging characters, the brisk pace. I enjoyed the read while I was reading it, to be sure, but I also couldn't quite figure out why I should really care that much. True, the episode exists to set some plot pieces in motion, and it does accomplish that, but Scalzi could have stripped this down to be a section of a more fully-formed episode, and done so at very little cost.

And there is a cost to the longer format, in the sense that it highlights one of the weirder and unrealistic aspects of the OMW universe. As we're told multiple times in episodes 1-3, the Colonial Union "held Earth back 200 years" so it could be used as a breeding ground for colonists and soldiers. If this were real world history, the terms "held back" and "200 years" would be meant figuratively, not literally--i.e. that the colonial power has suppressed the ability of colonial subjects to become technological or socio-political equals to the citizens of the metropole. Put another way, colonial powers were suppressing the development of their subject colonies in relative, not absolute terms. As it happens, real historical colonial powers usually hastened technological development and imposed new social and political institutions on their colonial subjects--not out of the goodness of their hearts, but because it made exploitation more efficient. So it would stand to reason that, if the Colonial Union were to efficiently exploit Earth, it would need to alter the infrastructural and institutional landscape of the home planet. In A Voice from the Wilderness, though, Earth appears virtually unchanged from our year of 2013. I could sort of handle this setup as long as it was vague and peripheral, but this interlude on Earth really makes the incongruity hard to ignore.

Hopefully we get back to business next week.

6/10. "Still enjoyable, but the flaws are hard to ignore.