Not a bad book in the bunch this week.  For the first time on this blog I delve into a new Monkeybrain Comic that is a great deal of fun and was treated to three new projects from three of my favorite creators.  Needless to say I had a smile on my face as I read this week's haul.


Pick of the Week: 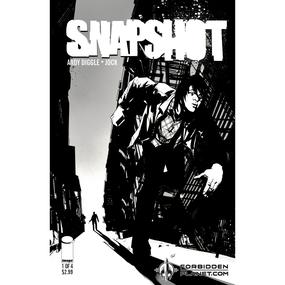 Snapshot #1 - When Andy Diggle and Jock work together on a project, I will happily blindly throw my money at them.  Snapshot had me hooked very quickly and managed to leave me absolutely begging for more.  A comic book store employee finds himself in the middle of a murder plot simply by finding a cell phone on his bike ride to work.  For whatever reason, the killer sees value in him, but we will have to wait for issue #2 to see what is in store for Jake.  Diggle's brisk pace and knack for moving a complicated story forward with ease paired up with Jock's unmatched visual style and stunning use of black and white put this book on another level.  Not surprised my LCS was sold out and I had go the digital route with this one.

Red Team #1 - Not surprisingly, Garth Ennis has created a franchise that is original and likely to be gripping and disturbing.  Red Team is a group of detectives that are very good at what they do, but like many crime stories, the drug lord that they want to take down is above the law.  It seems every time a witness is ready to testify they disappear or that his attorney gets him off with a technicality.  The Red Team does what you want the police to do in this situation, murder him.  Told through the perspective of a team member confessing his crimes, this book is smartly written and really sets the stage for what seems like a great new endeavor.

Phabula #1 - This week we are treated to a new title from Monkeybrain Comics, Phabula.  Written, drawn, colored, and lettered by Dalton Rose, Phabula is an exciting tale about a young sorceress who appears to be questing to rid herself of a deadly curse.  In issue one, filled with buckets of blood, she slaughters a horde of demons and Ogai, child of Gods, in her attempt to locate a map.  Rose's unique whimsical art creates a juxtaposition to the violence that is taking place on the page.  Throw in a dash of humor and you are left with a one-of-a-kind book that is sure to be highly entertaining.  Go buy it now on ComiXology for the low price of $.99!

Fearless Defenders #1 - Anyone who reads this blog knows that I greatly enjoy the writing of Cullen Bunn and the Fearless Defenders continues this tradition.  On the surface you are treated to a comic that feels like a summer blockbuster full of good looking women who kick a lot of ass.  Asgardian artifacts are stolen, vikings rise from the dead and Misty Knight, a bionic bad-ass, knocks out countless teeth.  When you dig a little deeper you see a story involving the destiny of Valkyrie and the return of the Doommaidens. With Bunn's skillful hand with wit and action and the phenomenal art of Will Sliney, Fearless Defenders should be quickly added to your pull list at your LCS.


Batman Detective Comics #17 - John Layman wraps up his Merrymaker plot as Batman uncovers the truth behind who the Merrymaker is and what his motivations were.  Layman's sense of humor shines through and his ability to script some of the most punishing panels is evident.  Reading almost like a standalone, the overarching plot involving Emperor Penguin is moved forward slightly.  I would guess that issue #18 would be a great leaping on point, but this one is enjoyable on its own accord.
Posted by Mikey N at 4:00:00 AM