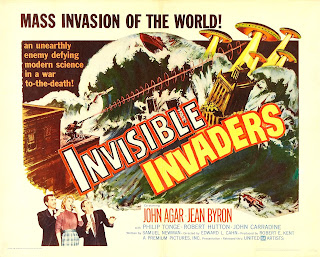 If you could distill 50s sci-fi B-movies down to their most basic and lovable essence, the hooch you'd be cooking in your bathtub would look a lot like Invisible Invaders. From nuclear accidents to menacing aliens standing in for Communists, from poor effects and the rampant exploitation of stock footage, and from Army brass that just doesn't get it to zombies to John Carradine, this movie's got everything but Ray Harryhausen stop-motion.

After a noted scientist (Carradine) blows himself up during an atomic experiment, one of his colleagues, a Dr. Penner, goes to an Army general to plead that the atomic program be used only for peace, but to no avail. Then, the night of Carradine's funeral, the filmmakers introduce the only practical effect they were able to accomplish -- dirt moving by itself in mimicry of two shuffling, shambling invisible feet. The shuffle-tracks lead to Carradine's fresh grave, and suddenly, the blown-up doctor's totally unmarked corpse shows up at Penner's house, the reanimated puppet of invisible aliens who will be taking over the earth in 24 hours. But when Penner doesn't manage to secure a global surrender in the time allotted, the aliens take matters into their own hands by reanimating a crash victim and sending him into the PA booth during a local ice hockey game to frighten all the Earthlings. Because the producers had stock footage of a hockey game.

This hockey-based warning proves ineffective, though (they should've tried throwing octopi on the ice), so the aliens go ahead and attack, an event which is narrated to coincide with other available stock footage, including that of WWII bombings, factory fires, and the planned demolition of tenement buildings. The aliens then reanimate the dead (yes! zombies!), who walk over a hill in a group of about ten. A tough-but-fair Army guard grabs Dr. Penner, his daughter, and her odd little fiance, and whisks them off to an underground science bunker designed to withstand atomic war. The zombies then walk over the hill again. Dr. Penner, et al, begin working out theories for how to stop the zombies and/or aliens, which really isn't that interesting. But the zombies walk over the hill again, and our intrepid team of humanity's last hope is worried they'll soon find their way into the science bunker. Which was designed to survive nuclear war. Whatever, whatever, the zombies walk over the hill again, good guys win, and in closing we are told that the moral of the story is that all the nations of Earth can work together. Because the producers had some stock footage of the United Nations.

I had fun with this one. You can catch it on Netflix Instant or YouTube.

Bonuses: +1 for the aliens using what appears to be Plan 9.5 from Outer Space; +1 for the hilariously obvious and rarely appropriate use of stock footage; +1 for the shambling, invisible feet that just shove dirt up in front of them over, and over, and over again; +1 for changing the definition of "shooting a man in cold blood" to mean "shooting a guy who's currently trying to kill you with a shotgun"

Penalties: -1 for the odd little fiance's brief bout with total insanity, before a punch in the jaw fixes him right up