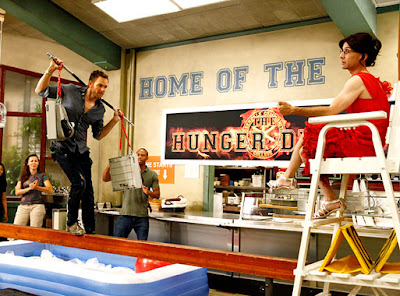 I didn’t love Community right off the bat. I watched the first few episodes, concluding that given the show’s cast it was a missed opportunity. Friends insisted I give the show a second chance, friends who’ve never steered me wrong. So, when season two rolled around, I watched a few episodes. Now, gimmickry and parody drove the show. I liked it less. Much less.

Thursday was therefore a big night for me.

The heart of Community -- or any sitcom, really -- are the characters. This is why I’ve enjoyed the show in the past. And this is part of the reason why the season premier was so disappointing. Relatively little time was spent on the characters. Jeff and the Dean got a lot of airtime, as did Abed -- though he didn’t do much with it. (Or maybe he did too much. See below.) There was something about Annie and Shirely pulling a prank that was largely pointless. And what the hell is going on with Troy and Britta? I don’t know either, because they had all of three minutes screen time.

In general, I don’t really care what happens to these characters. I just enjoy watching them interact like a bunch of sociopaths. But we had little of that this week. Instead we got the parodies of our beloved characters from Abed’s “happy place,” a sitcom in Abed's head where stock characters replace the protagonists -- and, brilliantly, Fred Willard taking on the role of Pierce. This might have worked later on in the season. But it’s been a long time -- a very long time -- since we have seen these people. And Abed’s depictions of them did not suffice.

One of the reasons I initially bowed out of Community was its gimmickry. After repeat viewings I came to admire and enjoy Harmon’s use of genre formulas. Sure these were gimmicks, but they were usually good gimmicks. This week’s “show-inside-a-show” device, however, felt tired. It was as if the new team was trying so hard to emulate Harmon that they settled on a formula far too obvious for the show's creator.

I feel like I should be charitable here. I don’t want to lay the blame at the feet of the new showrunners, David Guarscio and Moses Port. But, there were three gimmicks on this week’s episode. The sitcom in Abed’s head, Greendale Babies, and the Hunger Games. It’s almost as if they couldn’t help themselves, that they wanted so badly to impress us, to earn our trust. Perhaps they were desperate to earn our trust.

I truly hope that this heavy-handed gimmickry is just one-off event, a misstep by a new team guilty of trying too hard to deliver a season opening spectacular. Maybe they’ll come back more subtly -- yes, I realize I used the term “subtle” in a review of Community. I have no particular allegiance to Dan Harmon. I’d like nothing more than another awesome season, hopefully an awesome final season.

Bonuses: +1 for it being a new episode of Community; +1 to be charitable

Penalties: -1 for three gimmicks, all of which fell flat