Daniel Abraham is a good writer. I know this because I've read the first two installments of his epic fantasy series The Dagger & the Coin, and found much to recommend in his intimate, character-based approach to fantasy, as well as his "crisp, engaging prose." The Dragon's Path in particular struck me as a standout in a genre filled with bad writing and the endless revisiting of tropes, types and cliches. So it was with great anticipation that I started Leviathan Wakes, a space opera collaboration between Abraham and Ty Franck, who I understand is George R.R. Martin's assistant. The book came highly recommended, and was in fact nominated for the Hugo Award for Best Novel in 2012. It even has a quote from Martin himself on the cover, announcing the book as "kickass Space Opera...the way it ought to be written." Sounds promising, right?

Leviathan Wakes begins with a mystery. The Scopuli is a cargo ship hauling water to the residents of the Asteroid Belt, who make their homes in hollowed out asteroids artificially made to spin (and thus produce gravity). We are given the impression that this is a smokescreen, though what the "real" mission might be isn't clear. The ship is attacked and boarded by mysterious, well-armed assailants, who take the crew off the ship and leave it floating. Someone manages to set off a beacon, which attracts the attention of another water hauler, the Canterbury. Following custom and protocol, which requires captains to aid ships in distress, the Canterbury investigates. In the process it is attacked by the same assailants, and only a small away team, led by XO James Holden, survives. Holden finds proof that it was an ambush. With all signs pointing to Martian involvement, he broadcasts his discovery--setting off a war between the very powerful Mars and the plucky, scrappy, underfunded Belters.

Meanwhile, one Detective Miller is given the task of finding Julie Mao, a member of the Scopuli's missing crew. Miller works for an Earth-based corporation that does security on Belt station Ceres, and has to deal with the fallout from Holden's revelation. As he gets deeper into Mao's story, though, he begins to uncover a horrible conspiracy at work. He makes common cause with Holden and his crew, who now pilot the high-tech warship Rocinante, and together they try to save the solar system from oblivion.

The novel has its strengths. Abraham and Franck have built a plausible, believable "world" that does not depend on violating the laws of physics. They dwell on the effects of differential gravity--both between habitats and on various points of space voyage--to great effect, and in such a way that makes you realize how it's missing from most Space Opera. And if you are itching for a briskly-paced space adventure, then Leviathan Wakes can certainly scratch that for you.

I wish I could end the review there, because I genuinely like Abraham as a writer and respect what he's doing in fantasy. I know less about Franck, but given his background I have to assume he's got some good books in him too. Unfortunately, something went wrong with this particular novel.

Holden is a grumpy-yet-caring Captain who is very righteous and idealistic but really cares most about his crew. Sound familiar? If you watched Firefly, then it should, because he's basically Malcolm Reynolds minus the roguish charm and melancholy backstory. His crew even bears an odd resemblance to the crew of the Firefly. There's Amos, a big, dumb weapons guy who talks all unedumacated (a la Jayne); and then there's Alex, a likable, easy breezy pilot (a la Wash). Zoe and Kaylee get fused into the person of plain'-talkin', uber-competent and loyal XO/grease monkey Naomi. But did I mention that Holden and Naomi's dialogue is a virtual facsimile of dialogue between Malcolm and Zoe? Because it is. They're in love, and that's different, but unfortunately it's not an improvement over the social dynamics on the Firefly. A summary of their courtship:

HOLDEN:  I love you.
NAOMI:    You sleep with so many people. How do I know you really care about me, and aren't just trying to get in my pants?
HOLDEN: I want to have sex with you.
NAOMI:    I thought you'd never ask!


And then there's Miller, the grizzled veteran cop with a sadsack personal life and a drinking problem. I know this guy, right? Oh yeah, I remember now: he's the guy from virtually every police procedural ever written. 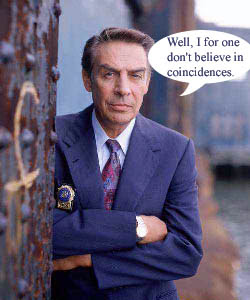 Of course I'm used to the endless rehashing of personality types in crime fiction, but at least hack crime fiction authors get that these details are background to the investigation at hand, and that we don't read the Nth Michael Connelly or Henning Mankell novel because Harry Bosch has dating trouble or Kurt Wallander has socialization issues. That's why successful hack crime fiction authors give us the grizzle and the sadsack personal shit in small doses spread out over a lot of books. In Leviathan Wakes it comes hard and heavy--so much so that, by the middle of the book, I was actively rooting for Miller's death.

Abraham and Franck do get traction from exploring the various social prejudices that would inevitably emerge from the different life styles among open-aired Earth, domed Mars and tunneled habitats in the Belt; the physical differences that would come from growing up under different gravitational circumstances; and the power differential among the three major players. But, in the moral framing of these socio-political power relations, there's an unfortunate overreliance on the tropes of libertarian SF.

Note to libertarians: I have nothing against libertarian SF in theory. I can not only read fiction that comes from a political perspective other than my own, I can even enjoy it. As it happens, my all-time favorite SF novel is considered a classic example of libertarian SF. Another from the same list is relatively sympathetic to anarcho-synicalism, which is basically the libertarianism of the left. And for the record, I'm pretty sure Abraham and Franck don't subscribe to political libertarianism (given that there's little trace of it in Abraham's other writings, and he's described himself as "a liberal, and considerably left of President Obama on many, many issues").

So what's the libertarianism doing in Leviathan Wakes and why is it problematic? To answer the first question, I'd guess it's a product of  the attempt to write "old school solar Space Opera," and the fact that the classics of the genre are positively swimming in the stuff. And--to be fair--since Leviathan Wakes is the first installment in a multi-volume series, this could be a setup for subversion or deconstruction later on. That's pretty much what Scalzi did to Heinlein in the Old Man's War books, so I won't discount the possibility here.

Nevertheless, its deployment in Leviathan Wakes leaves much to be desired. Earth and Mars are highly centralized and bureaucratized states where large corporations dependent on public funds shape policy to their sociopathic will. The Belt, by contrast, is a loose conglomeration of scrappy, independent-minded pioneers sick of being overtaxed and overregulated. Though there are some early attempts at moral grayscaling (the Outer Planets Alliance (OPA), for example, first appears to us as an ideologically-blinded radical group), these are abandoned midway for a more Bova/Niven-esque dynamic where Belters appear as archetypal "rugged individualist of the American West" to be contrasted with the nefarious "East Coast Warshington insiders" of the inner planets. These ideal types are deeply problematic in their real world historical-cultural context, but in Leviathan Wakes there's never much doubt as to who we should root for, especially when every single sympathetic Earther or Martian is just a freedom-lovin' Belter at heart.


This intersects with another issue I had with Leviathan Wakes: the inexorable, undeniable Americanness of the future it presents. I've criticized the "America in Space" trope before, and am unfortunately forced to do it again. I did like that family names reflect a more global sensibility, and there's an attempt early on to present a Belter lingo that mashes up English with German, Chinese and a few other languages, but it's peripheral to the story and pretty much abandoned halfway through the book. For the most part, people in Leviathan Wakes speak like Americans, act like Americans, have American-style military and political institutions, possess American sensibilities and share American cultural mores. The political conflict described above can even be boiled to "good America" versus "bad America." I understand political allegory, but I would have liked to see a more imaginative construction of the future.

My final criticism is a bit nitpicky, but it's something I have to mention anyways. In Leviathan Wakes, the main characters are primarily referred to by their last names: Holden and Miller. Yet pretty much everyone else goes by their first name--even the head of the OPA, who also happens to be a former Colonel in the UNN (Earth) military. Do they call him Col. Johnson? No. How about Mr. Johnson? Nope. Okay, how about just Johnson? You'd be wrong again, because he's exclusively referred to as "Fred." Yes, that's right: Fred. But if he's Fred, why the fuck is Miller Miller? Surely you can see how I found this distracting.

And that sort of sums it up for me. Though there were things I enjoyed about Leviathan Wakes, its problems were just too distracting. Whether it's a "kickass" Space Opera or not is something for individual readers to figure out for themselves, according to their own definitions of kickassery. Whether it's Space Opera "the way it ought to be written," though, is another story. I think highly of Abraham as a writer, and see potential in Franck, but this particular book did not meet expectations.

Bonuses: +1 for consistently interesting use of gravity as a limitation on human agency.