My family has been battling the flu this week in a losing effort so I will be presenting a truncated version of Thursday Morning Superhero.  Strangely enough, I have turned to Death Note in my time of sickness and have been enjoyed revisiting the struggle between Light and L.  Oddly appropriate to how I am feeling, I enjoyed the conclusion of Death of the Family and the latest installment of Walking Dead.  Here is hoping to getting over this flu and returning to full strength next week. 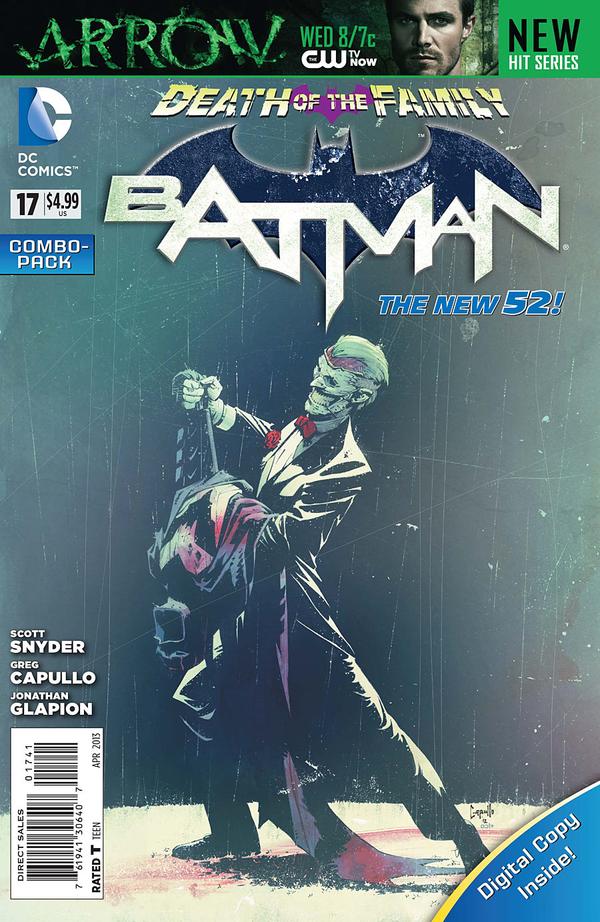 Pick of the Week:
Batman #17 - Scott Snyder really knows how to build the anticipation and suspense through his writing and the combination of the gnarly art work from Greg Capullo has led to some of the most terrifying panels in recent memory.  There is plenty of shock and horror in this issue, and one most unfortunate two-headed cat.  Not sure what Mr. Snyder has against animals, but what I do know is that conclusion to this arc did not disappoint.  While not quite as good as Court of Owls, Death of the Family is still well worth your time and money.

Runner Up:
Morning Glories #24 - Having just done a reread of issues #1-23, I was quite excited about the latest issue from Nick Spencer.  With each issue a little more is revealed about Morning Glories Academy but so much is still unknown.  In the latest issue we really get to learn about Ike and his relationship with his father Abraham (who he has stabbed to death and is currently being held hostage at the academy).  I have a feeling that what caused Ike to kill his father the first time (being left out of his will after being promised a lot as a kid) was meant to protect Ike from the horrors of Morning Glory Academy.  We will have to keep reading to find out.  I can't wait for the end of Season 1, as they call it, and more is revealed.

Walking Dead #107 - This was an odd, but very successful issue.  It opened with a lot of tense moments and you felt that things could boil over very quickly, but things calmed down very quickly, Negan acted reasonable, and Rick and his crew are staying par for the course.  Despite the gesture of returning Carl to Rick, he is still hellbent on taking down Negan and with his crew now having the ability to manufacture bullets they may have the upper hand.  I can't wait to meet Ezekiel and I think this comic used the word "fuck" more than any other comic in the history of the universe.
Posted by Mikey N at 4:00:00 AM