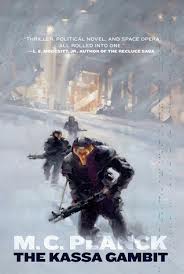 The Kassa Gambit is M.C. Planck's debut work, a slim 288-paged science fiction novel published by Tor. Set in the distant future after the ecological collapse of Earth, The Kassa Gambit tells a story of humanity after its spread throughout much of the known universe. After colonizing hundreds of planets, humans have realized that they are no doubt alone in the universe. After ages of space travel, other sentient beings have not been found.

The destruction of the small farming planet of Kassa throws this into doubt, and brings two unlikely souls together: one, Prudence Falling, the young captain of a tramp freighter (along with her ragtag crew); the other, Kyle Daspar, a police officer from Altair Prime who is in fact a double agent against the League, the interstellar government of mankind. While flying rescue missions on Kassa, they discover what looks to be an alien spaceship, crashed and abandoned after the attack. This leads Prudence and Kyle on a thrilling adventure spanning multiple worlds, one in which they slowly realize that an alien invasion is the least of humanity's concerns.

M.C. Planck has a way with words. He develops a fast-paced plot that whips the reader along a story filled with political intrigue. Planck also unfolds the plot and introduces the complex worlds and politics of the League in an accessible way, so any prospective reader will not feel lost while reading this book. In doing so, Planck has created an interesting, albeit well-trodden, story that has two people (engaged in a budding romance) seek to defy the odds and stop a plot that threatens the known universe.

In some ways, The Kassa Gambit is a blend of old and new. It is both a throwback to an older style of space opera, but feels based in no small part on recent TV shows like Firefly [Prudence's crew, after all, is a ragtag group seeking to escape notice of the fascist government, the League]. Moreover, The Kassa Gambit features a well-trodden story of a small crew trying to save the universe, but does it with a rampant pessimism (disguised as realism) that pervades modern science fiction. Once the heroes learn what they are up against, they find themselves fighting for the evil they know over the evil they don't. A repugnant interstellar government [fascism] doesn't look so bad when it is threatened by an even more repugnant system [communism?], after all.

Overall, The Kassa Gambit is a fun read. The world building is interesting and well done for a book this thin, and I particularly enjoyed Planck's explanation of the economics and methods of space travel, from gravitics to fusion and nodes for interstellar travel. Further, the writing is clear as a summer day. Placnk really succeeds in what he sets out to do: he has created an entertaining political thriller, a fun space opera set in the distant future.

That said, I do have a few quibbles with the story. The romance between Prudence and Kyle feels forced from the outset. Granted, I recognize that some people are attracted to each other from their first encounter. But it is surprising how quickly Kyle turns from enemy to possible lover. The romance became simply unbelievable at times. Who would pause and deeply kiss their significant other instead of escaping a dangerous situation? I would not. But Prudence and Kyle do... what they were thinking is beyond me.

And I also felt a bit slighted by the fact that the book had a deus ex machina ending, which I do not want to spoil for our fearless readers. But just put it this way, the book loses points on the way it ends, not to mention its unsatisfactory epilogue. In the end, there are a number of forehead-slapping moments that detract from the broader story.

Nonetheless, The Kassa Gambit is a worthwhile read for newcomers or fans of space opera. It is well paced, fun, and an overall light read. And had it ended as well as it started, Planck would have gotten even a higher score. I look forward to checking out M.C. Planck's future work!

Penalties: -1 for Prudence and Kyle's unbelievable romance; -1 for the book's deus ex machina

Bonuses: +1 for interesting nerdy discussion of node travel, gravitics, and fusion; +1 for Dejae (though I could equally give Dejae +1 million)