Another Thursday is upon us and I am going to try something new this week.  The pick of the week will be graced with an in-depth review and the rest get one sentence.  I thought it was time to mix things up a bit so here we go with a new format.  Let me know what you think. 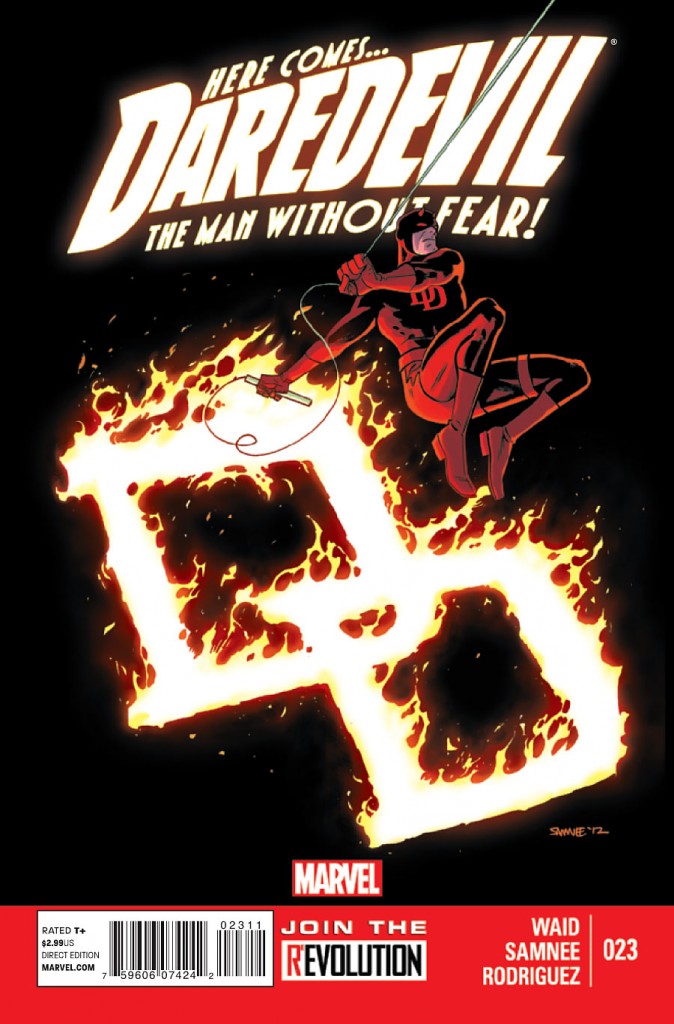 Pick of the Week:
Daredevil #23 - Mark Waid's run on Daredevil is nothing short of phenomenal.  Between issues I forget how much I have enjoyed him at the helm and how much raw emotion is at the heart of the Daredevil story.

The issue opens lightly with Daredevil treating Foggy to a night of whatever he wishes.  In a scene that makes you feel fuzzy, because it is what any of us would do, Foggy asks Daredevil to swing him around town.  We are treated to some humorous shots of Foggy clinging on to Daredevil and they swing around.

At the core of this issue is Foggy's current medical problems.  He is having a lot of symptoms that sound like cancer and he is looking to his old friend Matt Murdock for support.  The problem is that Murdock has been less than reliable causing Foggy to brave all of this on his own.

The side plot to this story is one that fascinates me because it reminds me of my son.  Whenever he hears of a hero's origin (Flash getting struck by lightning, Spider-man and the infamous spider bite, etc.) he always secretly hopes that will happen to him.  "Daddy, if I get struck by lightning will I be fast like the Flash?"  I think we are all a little guilty of this at one point or another, and a sinister force in New York has the same thought.  As circumstances always have to be perfect, this individual is conducting trials of prisoners going through Daredevil's origin to see if they can gain his radar ability.  The image of the hooded prisoners waiting their turn to save someone from being hit by a truck only to be covered in chemicals and have their eyes burned depicts this as a gruesome reality and not a childhood fantasy.

This distracts the reader and you are left thinking that Murdock let down his friend once again as he is dealing with an army of Daredevil-esque thugs.  To remain spoiler free I am going to wrap things up here.  Go read Daredevil.  If you missed Waid's current run pick up the trades or get the back issues on ComiXology.  You won't be disappointed.

The Rest:
Saga #10 - Brian K. Vaughan remains the master of creating bizarre and fascinating creatures and Fiona Staples remains the only artist who can do them justice.

Deadpool #5 - Deadpool stabs zombie Regan in the belly in outer space to which Regan says, "Mommy, my tummy is a boo-boo!"

Mind MGMT #8 - Henry Lyme is rounding up ex-Management agents (including a twin who shares power with her sister and a musician who can back up his files on demo tapes) as he tries to prevent the reformation of Management before the Eraser strikes.