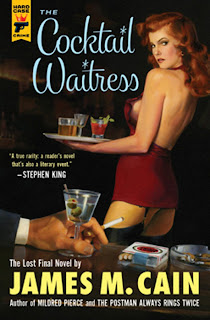 Joan Medford has bad luck with men. Or the men in her life have bad luck. Either way, the dudes who fall for her quickly end up dead.

The Cocktail Waitress—the long lost final novel of noir master James M. Cain—opens in the aftermath of Joan’s husband’s funeral. His death isn't necessarily a bad thing for Joan: the guy was an abusive nogoodnik with a penchant for boozing. But now Joan needs a job, she needs money to provide for her young son. What’s a girl to do in such a situation? Get a job or a benefactor. Joan does both. Within days of the funeral she’s not only found work as a cocktail waitress, but she’s got herself a rich old guy with a bum ticker. Things would have worked out well for our protagonist, had not it not been for Tom, a rakish schemer whose a bit more her age and a lot more fuckable than her elderly sugar daddy. Would you be surprised if I told you things quickly went downhill for Joan?

James M. Cain was the master of domestic noir. Whereas Chandler loved eccentrics and Thompson focused on psychopaths, Cain preferred the housewife trapped in a loveless marriage or the salesman seizing an angle for some quick cash. The small towns, the suburbs: Cain used these settings to explore the amorality of murder—forcing his readers to acknowledge how easy and appealing criminality can be.

Cain was among the first to make the criminal the protagonist. In doing so, his novels challenged readers, who are forced to empathize with scheming crooks, money-hungry femmes, mercenary drifters with murder on their mind.

The Cocktail Waitress is pure Cain, a return to the crime fiction that made him notorious. More importantly, it’s a page-turner. While the plot may be fairly standard, particularly for Cain, it’s the author’s style that makes the book so thoroughly readable. His prose is stark and straightforward—though the writing is a little less terse than a typical Cain novel, which may be a result of the author having died before putting the finishing touches on the novel. Nevertheless, I read it in a day, finding myself unable to put it down.

There is no real resolution to the novel. By the end of The Cocktail Waitress we are forced to question the narrator’s credibility. Joan tells her story as if she is wholly innocent, as if she’s simply concerned with the wellbeing of her son. But one can’t help but wonder if she’s actually a conniving femme fatale, a craven villain who uses men for her own benefit and casts these schmoes aside once they have served their purpose. Or she may simply be an unlucky but innocent girl trying her best. It’s up to the reader to decide.

At times the book feels a bit pastiche. A subplot dealing with political corruption comes out of nowhere, hardly connecting with the book’s main story. But, given the fact that The Cocktail Waitress is the product of editing a number of manuscripts and versions of the novel, the novel does not generally feel all that cut-and-paste. Hard Case editor Charles Ardai deserves praise for putting it all together in a relatively seamless way.

The Cocktail Waitress may not be Cain’s best work. It may not be the best roman noir. But it’s a damn fine read.

Bonuses: +1 for James M. Cain; +1 for Charles Ardai's tremendous efforts in getting this out