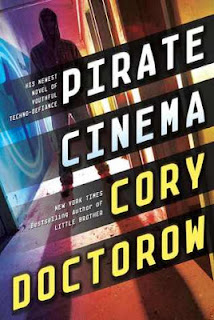 Pirate Cinema is well-known internet "influencer" Cory Doctorow's latest young adult dystopian novel and call to arms. It is his political manifesto against draconian copyright laws that stifle creativity and divert resources from issues that may matter a great deal more. And it is his broader call to arms against the corporate involvement in the lawmaking process. Set in the United Kingdom in the not-too-distant future (perhaps two or three decades), Pirate Cinema tells the story of Trent McCauley, a sixteen year old British kid and mashup artist who spends his free time illegally downloading videos of his favorite actor, editing and mashing up those videos, and reposting them online as his own creations. And he's very good at it. But thanks to a draconian copyright law, Trent's illegal downloading and copyright infringement causes his family to lose their internet access for an entire year, with no appeal. Losing the internet nearly destroys his family, which depends on the internet for their livelihood. Trent's father loses his job, his mother loses access to her health benefits; and his younger sister is unable to study online. Faced with this familial crisis, Trent runs away to London.

Once in London, Trent meets up with Jem, a well-spoken, intelligent young hobo who teaches him the ways of his new world. Not only does Jem teach Trent how to survive, he shows him how to flourish! They squat in an abandoned pub, build him a new (and more powerful) laptop computer, and enter a society of artists and activists. Trent joins an underground pirate cinema community, and finds himself and his culture jamming friends thrust to the center of a fight against an even-more-draconian copyright law, one that threatens to enrich Hollywood at the expense of pretty much everyone else. Thus begins a story pitting young activists against evil (money grubbing) corporations, a story where it takes the power of a movie to change people's attitudes toward societal injustice.

Overall I found Pirate Cinema to be a neat, crisply written page turner. Doctorow has great narrative skill, and creates a number of charming, creative, intelligent, and funny characters. Trent, Jem, 26, Aziz, Rabid Dog, and Dodger are all interesting characters in their own right. Doctorow even uses Trent's adolescent friends to explore other social issues (like sexuality) that teens need exposure to. And Doctorow is at his best when highlighting adolescent angst in all its colors. Trent runs the gamut of emotions that we all felt as teens, from insecurity to boastful pride, from depression to the heights of happiness, and from fear and self-conscious doubt to courage and unlikely heroism.

But Pirate Cinema at times feels preachy and polemical. Granted, Doctorow has an important point to make, so preachiness is part of the book's purpose. Pirate Cinema is littered with campaign speeches against draconian copyright laws, showing how they stifle creativity, enrich Hollywood at the expense of the broader public, and are a waste of resources that could be better spent elsewhere. Granted, I am with him. Penalties for copyright infringement, in particular, are too harsh, and there needs to be a broader discussion about the rights consumers have over what they purchase. And there also needs to be broader discussion about what is fair use for hobbyists (for instance, the two pictures that I placed on this website, pictures I neither purchased nor paid for the rights to use). Since his book is geared at a young adult audience, Doctorow should consider himself successful in highlighting an issue that will become more important in the coming years.

At times, however, Doctorow's polemic lacks nuance. Pirate Cinema channels the rage of the global Occupy Wall Street movement, and portrays media executives as money grubbing goons that will stop at nothing to make a few extra bucks... even if this comes at the expense of sending young boys and girls, whose only crime is to download off the internet, to prison for violating copyright laws. The corporations are pure E-V-I-L. Granted, this is done through a splendid narrative, one geared toward a teen audience that is more receptive to such argumentation. It would have been nice, however, to see the other side of the argument as well, presented in a dispassionate manner.

But the biggest problem with Pirate Cinema is that the overall narrative at times feels contrived. For a boy who runs away to London, Trent experiences surprisingly little misfortune. Instead, everything seems to come very easy to him:

Trent runs away from home, but the worst he experiences in his first nights is having his laptop stolen. He is neither roughed up, hurt, nor taken advantage of during his initial adventures in London. And he never goes hungry. Shortly after arriving he meets Jem, who takes Trent under his wing and teaches him the lay of the land. Jem shows Trent that everything comes easier while homeless: they make a ton of money begging, build better computers (with the help of Aziz) through throwaway materials, have a more active social life, and have more time to make an impact with fellow culture jammers and mashup artists. Trent, in fact, never experiences a truly tense moment or series of moments. I never got the sense that Trent was in real danger of physical assault, nor did I feel like he would actually be thrown in prison (even after being slapped with a lawsuit). Even getting laid was easy! Not to mention forming a plan to influence Parliament to vote against the draconian copyright infringement laws...

In the end, I had to remind myself that this is a book for teens, not adults. In this sense, I think that Doctorow has created a book that rests in the sweet spot between enjoyability and educational content. Young teens will find much to enjoy in Pirate Cinema. It features a fun narrative and memorable characters, and highlights important issues that face society today.

Penalties: -2 for the lack of suspense or tension in Trent's storyline.