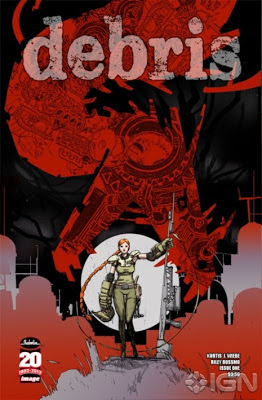 I complain a lot in these reviews about the lack of plot in comic books. I pretty much complain about the lack of plot in all forms of fiction—movies, novels, my friends’ boasts about past conquests. But comics in particular suffer from tired storytelling, hackneyed clichés, uninspired twists. As it’s a visual medium, with artists monopolizing the glory, there are perhaps relatively low standards for writers. Hacks abound.

But sometimes I enjoy comics.

Debris (Image’s Shadowline imprint) is an expertly crafted limited series from the team behind Green Wake, Kurtis Wiebe and Riley Rossmo. Set in some distant, ecologically devastated future, Debris tells the story of the last tribe of humans struggling to survive in a waterless sea of garbage. Animal spirits have returned to this earth, inhabiting physical forms made of junk—debris, I just got it. Some of these machine-beasts are benign. Some tear people to pieces and need killing. Maya, the last Protector of the Maiden tribe, embarks on a search for water. The story is a bit more complicated than that. But not that much. 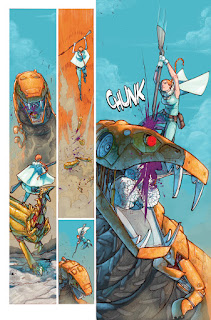 Building from a fairly standard post-apocalyptic model, writer Kurtis Wiebe strikes a near perfect balance of words and pictures in Debris. His plotting is terse and succinct, but dynamic. Wiebe avoids verbiage: there’s no explanation of how the world got this way, it just is. Conversations are necessary, points are quickly gotten at. The ending was a bit too cliched though, but not enough to have ruined the story.

Of course, when you’re working with an artist like Riley Rossmo you don’t want to waste space with needless panels. Rossmo’s art is simply beautiful. In Debris he evokes Moebius, creating elegant slender figures, delicate characterizations, and clear, simple designs. Using unadorned paneling, Rossmo focuses his attention on action and movement, but is quite capable of serene imagery as well. He proves yet again that he's one of the best artist currently working.

The ideas behind Debris are by no means original. Wiebe and Rossmo draw from a number of fairly standard sources: Nausicaä, Scandinavian and Native American mythology, Dune, Wall-E, a quarter of the sci-fi films since The Matrix. Scores of comics published over the last twenty years have pilfered these works and produced far too many boring stories about some dystopian future where something happens and I don't care. Objectively, Debris really doesn’t contribute much to this tired genre.

But Wieber and Rossmo are no hacks. With a simple, uninspired premise, they have created a near textbook example of how a comic should be written over four very tight issue. It’s no From Hell, but damn was it fun.

Penalties: -1 for being another post-apocalyptic comic

[See this for scoring explanation and such.]
Posted by Philippe Duhart at 12:11:00 PM