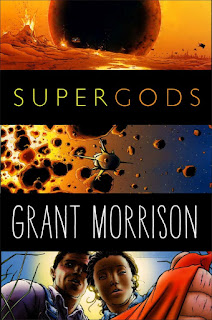 Before reading Supergods: What Masked Vigilantes,Miraculous Mutants,and a Sun God from Smallville Can Teach Us About Being Human, I never thought of Grant Morrison as a man who knows and loves superheroes. Then again, I never gave Grant Morrison much thought. Morrison has always seemed like that guy in high school who wore Rainbow Bright t-shirts, claimed to love The Carpenters, and rode around on a unicycle. Weird for weird’s sake. Doom Patrol and Animal Man read like that at the time: sophomoric attempts to appear hip and outré, while sacrificing plot and character development in the process. Sure, he's made his mark on superheros since then -- first on New X-Men and later much more successful stabs at Superman and Batman -- but I figured, like Moore, Bendis, Brubaker, and a host of other writers, he was simply going where the money is. But, having read Supergods, I must admit that the man knows superheroes. More to the point, he loves them.

More problematically is the underlying theory that Morrison rather unevenly develops in the book, which draws more from Jung’s psychedelic-analytical framework than chaos magick. Superheroes are just the modern incarnations of the ancient gods and fairyfolk. Referring to the original Flash, Morrison sees a new incarnation of Hermes, who “washed up with the rest of the trash in the swill of twentieth-century gutter culture” as “that bridge between man and the divine now known as the superhero.”

Maybe. But it could be that the simplicity and directeness of these narratives are inherently appealing, especially to children -- who if anything want to be big and strong like Superman. I know I did. My own trajectory into comics ran from The Lives of Saints to X-Men, with a brief but significant detour into the wonderful D’Aulaires books of Greek and Norse myths. The timelessness of all these genres of heroic tales doesn’t mean that there’s something eternal or transcendental undergirding human storytelling. It’s more likely that the mind of a child enjoys simplicity and detests ambiguity. We learn grey as experience with the world forces us to dispel with Manichean notions. Gods often get cast aside in the process. Or they are forced to change, to grow up and accept the messiness of reality.

These parts represent no more than 25% of the overall page count -- which at 500+ pages is considerable. For the most part, Supergods is a fairly straightforward history of superhero comics.  Even here, however, Morrison remains slippery. It is unclear if his take on the Bronze Age -- which he aptly refers to as “the Dark Age” -- is positive or negative. Does he like Watchmen or not? Furthermore, his referral to post-Image Comics as the “Renaissance” is problematic. If anything, current superhero comics seem to frantically look to the past in search of something that will undo the current decline of the industry. There’s Silver Age cosmicism and existential angst, Dark Age grit and social commentary, and Golden Age whismy and wonder floating around the comic world of today, often in the same book -- like Morrison's current and wonderful run on Action Comics.

Morrison’s reference to Iain Spence’s Sekmat Thoery also feels overblown, which he partially admits by referring to it as a "framework" for finding "meaningful patterns in the service of lateral thinking." But, even as such, it isn't necessary. Rather than reacting to sunspot activity, comic books -- like all pop culture -- respond to broader historical trends, to widespread social hopes and anxieties. Comics are also shaped by the history of the publishing industry, as Morrison notes. He views the artist-led testosterone-fueled crosshatched shallowness of the Image era as an answer to the cynicism and realism of the Dark Ages, when brainiac writers ruled the field -- with their plots, ideas, and other inconvenient things Lee and Leifeld never bothered with.

Finally, he is only suggestive in prognosticating the future of the superhero myth, though he seems to indicate that the superhero can no longer be bound by the comic book format. The big screen is the hero’s new home. As Morrison writes, comic books as a whole have become “a respectable stepping-stone to Hollywood and big money.” This of course is obvious. But as to what will happen in the comics’ world itself, Morrison doesn't have much to say. He ends the book on a relatively positive note, reflected in his work these last few years at DC, especially All Star Superman and Batman and Robin. Whether or not this the superhero’s last gasp as a clever wink and nod to the enthusiasm and confidence of the Golden Age, Morrison doesn’t say. My own suspicions is that he’s smarter than that. Having had brushes with death in the post-WW2 era and the speculator-fueled market crash of ‘90s, the superhero has proven resilient. Gods are, after all, hard to kill.

But, despite these criticisms, I enjoyed the book immensely. Grant Morrison’s prose is wonderful and, with the exception of his much-too-long recounting of his drug-and-magick middle life crisis, he kept my attention. Even his somewhat casual and unfocused theorizing was fun to read. I have friends like Morrison: scattershot rather than measure, intuitive rather than analytical, I rarely agree with them but nevertheless have fun arguing with them and pondering their navel-gazing while knocking back bottle after bottle of Miller High Life.

Bonuses: +1 for being a readable history of superheroes

Penalties: -1 for haphazard theorizing; -1 for having too much fun in the nineties