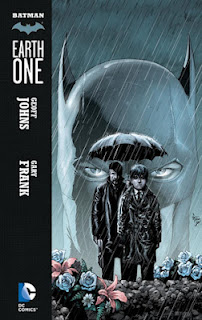 Amid the hysteria surrounding The Dark Knight Rise and the ensuing Aurora tragedy, a little-noticed development occurred in the world of Gotham’s caped crusader: DC ran out of Batman stories. So they let Geoff Johns rip off Year One.

All in all, Batman:Earth One is unnecessary. The plot was entirely boilerplate: a young Batman seeks to close the case on his parents’ murder and bring down Gotham’s corrupt mayor, Oswald Chesterfield Cobblepot, in the process. Throw in a birthday-obsessed serial killer, Harvey Bullock as a hotshot TV detective from LA, and a very downtrodden Detective Jim Gordon and…well, boilerplate. 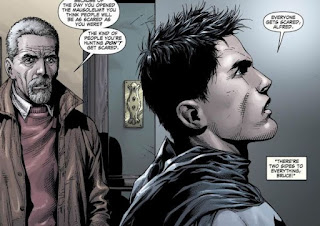 I’ll give Johns credit for reimagining Alfred, Bruce Wayne’s butler. In Earth One, Alfred is a war vet, security consultant, and all-around badass. But he’s also something of a mentor to the Dark Knight, at times his guardian angel. Johns developed the relationship between Bruce and Alfred in a way that has often been hinted at -- in both the comics and films, particularly Michael Caine’s interpretation -- but rarely fleshed out in such a way. Earth One’s Bruce Wayne doesn’t use the whole spoiled rich kid thing as a cover for his clandestine crime-fighting. He is a spoiled rich kid. It’s Alfred’s job to turn Bruce into a warrior.

Gary Frank’s artwork stands out, serving to subtly express the angst and anger that has driven Batman’s personal crusade has always. His work is clear and unadorned, evoking actual humanity and eschewing the hackneyed grit and brooding posturing of virtually every Batman artist since The Dark Knight Returns. 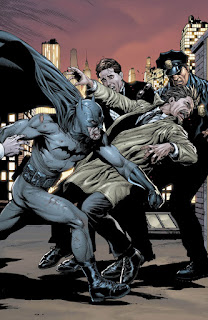 Unfortunately, Johns’ plot doesn’t match Frank’s art. It’s ultimately too much like every other Batman story out there. DC envisions the Earth One line as a series of graphic novels exiting apart from the regular DCU -- thus ideal as an introduction for new readers. But why is this necessary? After 70 years of comics, a highly-popular TV series, and 7 feature films (not counting those from the ‘40s) is there anyone out there who doesn’t know Batman’s origin story? Maybe my mom, but she’s not going to be getting into comics anytime soon.

Anyways, there are many great Batman GNs for the novice reader. Arkham Asylum, The Cult, Hush, Killing Joke, etc. In comparison to these GNs, Batman: Earth One is rather boring.

Reading this book -- and many of the 70 or so relaunched Batman series under DC’s “New 52” line -- I have to wonder if Grant Morrison is right about the Death of the Superhero. Have they outgrown comics? Has Hollywood FX finally caught up with the potential of the superhero and replaced comics as their primary narrative mode?

Or is it just that there is no longer any need for new Batman stories?

Bonuses: +1 for letting Alfred actually do something

Penalties: -1 for ripping off Year One; -1 for being unnecessary

[See explanation of our non-inflated scores here.]
Posted by Philippe Duhart at 12:09:00 PM