We are happy to present another guest post by Rob Kristoffersen, who previously wrote an eloquent essay on Maus for us. Here he reviews Craig Thompson's graphic novel Habibi. Enjoy! 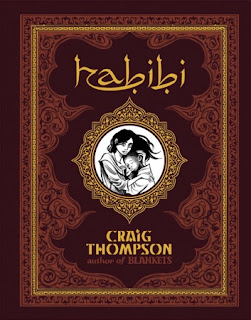 Those familiar with Craig Thompson's work knows of his ability to capture humanity and emotion with such flourish and beauty to realize that you're looking at something new. You've never seen it before, you'll never see it again, but you have a lasting document that remains with you forever. Aside from Thompson's other work (Goodbye Chunky Rice, Carnet de Voyage) he is greatly known for his 2002 graphic novel Blankets. Captured through the winter season, primarily, Thompson deals with issues of adolescence, religion, and sexuality on a level that not very few can express. Granted, Blankets is autobiographical, but we all lose touch with that side of ourselves at one point or another. Regardless, Thompson earned three Harvey Awards, two Eisner Awards, and thousands of adoring fans.

Seven years later Habibi landed on bookshelves, a sprawling 672 page masterpiece that brought with it the flavor of the Middle East. Here, our protagonist is a middle eastern girl named Dodola and her adopted slave child Zam, as they survive in a wasteland of sand, blood, and water. Dodola's journey is endlessly tragic. She is sold into slavery as a child to gain a husband who would teach her to read and write. From there she is ripped away from him, whores herself out to traveling caravans for food and water, is captured and thrown into a harem, and does prison time. Zam, who is also known as Habibi, endures a journey to find Dodola that is just as heartbreaking. Before they were ripped from each other, their love began to grow, evolving from a mother/child type to lovers as Habibi transforms through adolescence. The parallel journey finds him casting aside his sexuality and his voice in order to get her back, while she is exploited for hers. From the first pages, Thompson's obsession with Arabic language and calligraphy bleeds onto the page, creating a style that the whole book fits into. Continuing from Blankets is Thompson's obsession with spirituality and religion, and fused within is a mythic and highly respectful Islamic history lesson. It doesn't bog down the book, but fits throughout the narrative like a puzzle piece falling into the right place.

After reading Habibi, I was stunned to hear that Thompson had not visited the areas represented Ewithin Habibi's pages, but that instead he did a ton of research to sculpt his art. The research shows, as he seems to paint a convincing picture of the Arabian land and it's inhabitants--though granted, lacking personal experience in the region, I could be wrong [ed: it would be interesting to see what someone from, or well-traveled in, the Middle East thinks of its treatment in this book]. Returning to adorn the pages is the jaw dropping art style that made Blankets so beloved. His interpretations of Islamic scripture and emotion in general has the reader just entranced, often staring at the page long after it's been read.

The greatest downfall of the book is page length. Thompson's work is always a quick read despite page length; he never bogs the reader down with dialogue, only when he needs to. Even he has admitted never being one for prose, but with the stunning art and the compelling story, it never matters. However, with Habibi it gets a little tiring past page 600, particularly the sexual euphemisms and degradation.

Was the seven year wait worth it? By all means YES; the book certainly cuts past it's flaws to become an art form enviable to the greatest degree. The book design alone makes this a must buy, but Thompson's style is what you come for, even if I'm shoving it down your throat. Take a look at a few panels, and you will be convinced. Thompson has announced two projects in the works, one, an all ages book and a second exploring another side of sexuality. Whatever it is, I will pre-order, It's set in my head, i'll buy it in hardcover and paperback. Hopefully, this time, it's not a seen year itch.

Bonuses: +1 for his returning Blankets style, +1 for book design, +1 for the research done on this book

Penalties: -1 for page length, -1 for the fact that Dodola looks kind of like the Octomom as she gets older