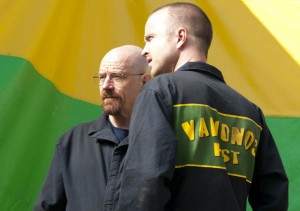 Really, a house being fumigated? That’s where they’re going to cook? I get that Breaking Bad is a highly original television show, I get that the writers thrive on catching their fans off guard, I get that Walt is a very unorthodox criminal mastermind. Sure, it's tented. But, really?

Despite what may be a bit of a ridiculous idea -- or genius, we’ll see -- this week’s episode demonstrated yet again how good of Breaking Bad is.

“Hazard Pay” -- the third episode of the fifth season -- focuses largely on the creation of a criminal enterprise. Of course, Walt, Jesse, and Mike are building on the ashes of Gus Fring’s much larger and, I suspect, more successful  business -- does anyone think that Walt’s efforts will go gangbusters? (Excuse the pun. That was a pun, right?) Gus’s legacy continues to affect the lives of our heroes, this week in the form of business expenditures, particularly the “hazard pay” Mike needs to throw at his guys in order that they keep their mouths shut.

And Walt thinks that while Mike handles the business end, he'll handle Mike. 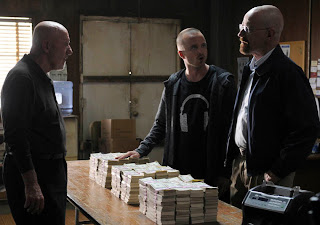 This week’s episode was particularly well directed. Adam Bernstein -- who previously directed the infamous “Box Cutter” episode -- puts crime at the center of the show: from the Saul Goodman-guided tour of potential cook sites to the divvying up of the ill-gotten gains, minus expenses. This week’s centerpiece was the cook. Set to the Peddlers’ version of “On a Clear Day You See Forever” -- and reminiscent of the money scene from Casino -- Bernstein’s portrayal of the cook was not only well-directed, but it seemed to purposely harken back to the early, salad days on the “Chrystal Ship.” As the two sit on some unsuspecting homeowners’ couch, watching The Three Stooges and drinking beer, chatting about life, it appears for a moment that maybe, just maybe, things will finally go well for Walt and Jesse.

Let’s not be so naïve. Shit will eventually go bad. That’s what this show does best.

Though Breaking Bad is a crime show, human relationships are central to its appeal. (Which is why it’s better than The Wire, I.M.H.O.) But these aren't touching, tugging-at-the-heartstrings human relationships. We're dealing with clearly deranged people, people who've been damaged, often by their own decisions. Walt’s clear discomfort while sitting next to Brock, the boy he poisoned last season; his subtle manipulation of Jesse and Marie; his almost psychopathic treatment of Skyler. It is getting hard to not want to see him fall. While some may have seen the Scarface reference as a bit too heavy-handed, I found it quite fitting. Walt, after all, thinks he's a bad ass now. He's the boss.

And Skyler. She’s gone over three episodes this season from being in a catatonic state to having a nervous breakdown -- driven by her fear of her husband, though Marie's yapping was definitely a contributing factor. But after having spent the last few weeks rewatching the first four seasons, I find it difficult to give a shit about her terror. Let’s be honest: she’s been a selfish, unsympathetic, bitc…well, I don’t use that word anymore, but you get my point. (She did screw Ted Beneke, rather than allow Walt to explain himself.)

Penalties: -1 for an absurd cook site; -1 for trying to make me care about Skyler

Nerd Coefficient: 7/10, "an enjoyable experience, but not without its flaws"

[See explanation of our non-inflated scores here.]
Posted by Philippe Duhart at 9:37:00 AM