I'm a child of the late '80s when it comes to comics. So for me, the grittier the better. And, after the Punisher and Wolverine, Batman was the grittiest. This was the era of Dark Knight Returns, The Cult, Killing Joke, Arkham Asylum. It was also the second coming of Batmania -- which is how Batman began for me. The Waldenbooks near my home stocked all of these trades in anticipation of the release of Tim Burton's film. Fortunately, though I was 10, I worked with my gardener father -- mowing and hedging lawns, raking leaves, fixing sprinklers...well, handing him tools while he fixed sprinklers. My father was an old country Basque. Not only had he never heard of child labor laws, but the idea of paying his son in cash never crossed his mind. Comics were my wages. So, for much of 1989, we'd head down once a week to the Waldenbooks - reeking of cut grass and gasoline -- and I'd get to choose one of those glorious trade paperbacks as a week's pay.

Two collections in particular stood out at the time: The Greatest Batman Stories Ever Told and The Greatest Joker Stories Ever Told. These two books provided a history of Batman; in fact, a history of comics. The early Batman stories were awesome: eerie, horror-tinged tales the simplicity and directness of which struck my 12-year-old heart immediately. The '70s Gothic Noir Batman -- especially the work of "Dennis O'Neal Adams" -- also moved me with their fairly realistic take on criminality and justice. The in-between -- the silly, breezy, f*cking ridiculous '50s and '60s -- sucked as bad as did the T.V. show. Perhaps I was too young for irony and camp. Batman was supposed to be dark and brooding. The permanent smile he wore during the era between the grit irritated me.

On the many, many rereads of the Greatest Story books, I skipped those not-so-great stories.

So what's this all mean? I don't know. I just needed to write something by way of introduction. Now, on to my ranking of the best New 52 books with "bat" in the title. (Sorry Catwoman. I have other things to do than read comics all day.) 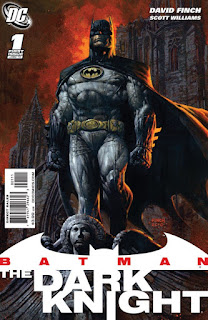 6. Batman: The Dark Knight
Honestly, I could barely get through this series. I found it to be an unimaginative, unoriginal, and unnecessary book by writer/artist David Finch. The plot of the first arc -- Gotham's villains have been slipped a drug that makes them fearless until their eyes bleed -- reminded me of some many other Batman stories. For example, anything that featured Scarecrow. Finch's artwork also turned me off: all testosterone and grimaces. The plot felt like an excuse for Finch too pull out all the artistic gimmicks that made me hate Image Comics even as a teen. In short, he underwrote and then cross-hatched the sh*t out of this book. Granted, the White Rabbit was adorable. But you know who else can be adorable? Actual human women. Have you checked out The Chive? 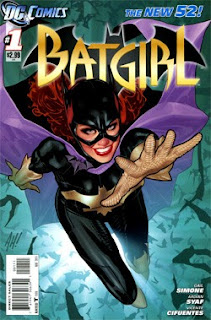 5. Batgirl
I really didn't want to read this. But, I was pleasantly surprised. I was pleasantly surprised that this didn't suck with extreme prejudice. That doesn't mean it was good. But it wasn't terrible. As a rule, I don't like female versions of male superheroes -- just as I don't like Wonder Man. But, Gail Simone did an O.K. job at writing a compelling story about Barbara Gordon coming to grips with being able to walk again. The rest of the book was pretty much meh. The dialogue felt trite, as did some of the characters (i.e. the tough, anarchist, bartending Asian roommate).  And, I hate to ask for some realism in my comics, but I just didn't buy The Mirror's motivation for being a bad guy. The art by Ardian Syaf and Vicente Cifuentes was good -- the definition of competence -- while simultaneously towing the exact line that has become DC's house style. Meh's the word on this one. 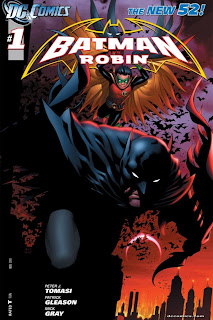 4. Batman & Robin
I have always hated Robin. We all know why he was brought on in the first place: to salt Batman's ass-kicking game. Plus, isn't it unethical for Batman to be endangering an adolecent by having him go up against Killer Croc? Somewhere along the line, DC wizened up and gave us Damian Wayne, the actual son of Bruce Wayne who has been trained to kill since birth -- so it's alright for Batman nightly to put him in harm's way before his voice drops. But, I still don't really care. The first story arc of Batman & Robin was not bad at all. Peter J. Tomasi penned a fairly thrilling yarn pitting Batman against Nobody, the son of Henri Ducard. Bruce Wayne's former mentor. with young Robin caught in the middle. The story is essentially an exploration of Batman's "no killing" morality that ends up being wrapped up a little too nicely. In the end, I wasn't convinced of Batman's moral logic. By not killing the Joker, how many have died? At what point is Batman responsible for these deaths? Better than expected, but remember, I hate Robin -- but at least this Robin's ended up with issues that could make for some future good reading. 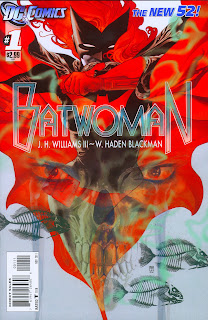 3. Batwoman
Wow. This one caught me off guard. Astute readers will remember how I feel about female versions of male superheroes -- and Wonder Man. But Batwoman was actually a good comic book. Co-writers J.H. Williams III and W. Haden Blackman -- what are they, 19th century industrialists? couldn't resist -- offer up a chilling horror crime story about missing children, steeped in Mexican-American folklore. But this is all more or less an excuse for a character study that feels real. Batwoman is seeking her way out of Batman's shadow, a means by which to make her mark as a hero in her own right. (May I suggest ditching the "Bat" part of your name?) The initial story arc deftly set up the series, foreshadowing future plotlines and conflicts. Of particular interest will be her involvement with the Department of Extranormal Operations. But, all this would make little difference if J.H. Williams III hadn't provided the artwork, which is absolutely stunning. He manages to combine naturalism and artistry, yet remaining focused on storytelling. His creative paneling makes anything David Mack has ever done look like a pile of puke. Unfortunately, Williams' ended his run as artist with issue 5. A shame. A bloody shame. 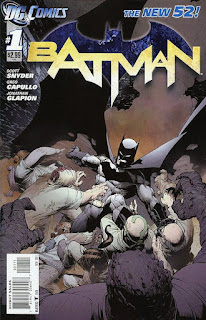 2. Batman
This one, plotwise, is the best of the bunch. Part gothic horror story, part urban conspiracy, part exploration into Batman/Bruce Wayne's messianic conceit: Scott Snyder's story was everything a Batman tale should be. I recommend this so highly, that I will not bother with going into the plot other than to say it involves the deep secrets of Gotham City, the 13th floors that even Batman has no knowledge of. It's a twisted, psychological exploration that stretches into the recesses of the Batman family. That and undead steampunk ninjas. Read it yourself, nerd, through issue 10. You won't be disappointed. Well, actually you might be. The reason: Greg Capullo's artwork. It's not that Capullo is a bad artist. He's simply not on par with Snyder's story, or possibly with Batman himself. I also found myself perplexed by his portrayal of Bruce Wayne, who at times looked 17-years old, and at other times looked like every other male in the book. And what's with the annoying smirk on everyone's face? What emotion is that supposed to convery?  If J.H. Williams III has worked on this book, we'd have another Hush or The Cult on our hands. But, we're left with a book that ultimately is less than. It could've been a contender. 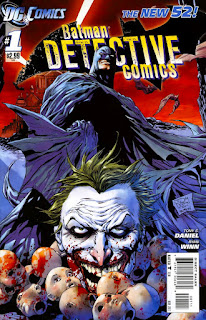 1. Detective Comics
Really, at the end of the day, all we need is two Batman books: Batman and Detective Comics. This post would have been so much easier to write. Though Batman featured the best story and Batwoman the best art, Tony Daniels and Ryan Winn's Detective Comics combines great art with inspired storytelling. His first run is a brutal, nasty thriller -- a nice contrast to Snuder's more subtle Gothic take. Daniels, in many ways, gets to have all the fun. His Batman is early in his career, a man wanted by cops and criminals alike. Issue 1 we get the Joker. By issue 5, we get Penguin. In between, Daniels tells a Silence of the Lambs-meets-The Killing Joke story featuring a new villian, the Dollmaker -- whose past, we find, is not so different than that of Batman. Daniels manages to touch on the varied psychological implications of trauma while still giving a damn fine comic adventure that reeks of creepiness. Ryan Winn's artwork fleshes out the darkness and violence of Daniels' plot quite nicely. His work, though clearly routed in the American comic tradition, has at times European touches. And always, always clean lines -- especially when portraying ugliness. After looking through the rest of this lot, I was glad to be given a break from DC's new house style. All in all, this is why we read Batman: nasty, gritty crime stories. And a guy in a bat costume battling insane crooks who have even less of a fashion sense than he does.